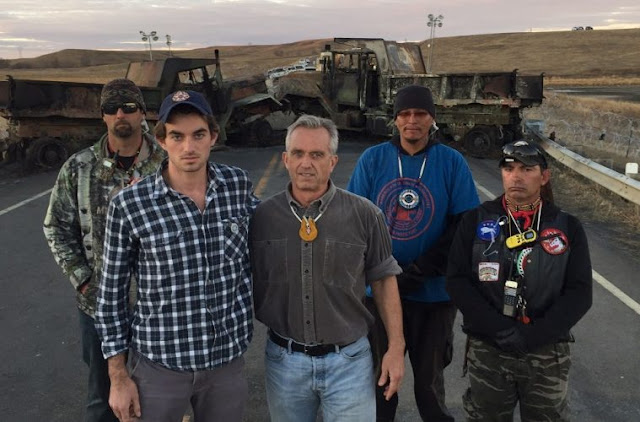 Environmental attorney and activist Robert F. Kennedy Jr. has put in decades of work to protect the environment, so having him publicly show his support in the fight against Energy Transfer Partners and the Dakota Access pipeline (DAPL) is of massive importance.

‘What [Energy Transfer Partners] is doing is a real environmental crime,” said Kennedy, who serves as senior attorney and president of the Waterkeeper Alliance, which is a non-profit organization regarding the right to clean water.

Kennedy is among a growing list of high-profile supporters who have shown their support against DAPL by visiting the site to stand with Standing Rock in the movement to protect water and indigenous sovereignty.

Recently, Kennedy wrote a letter on EcoWatch that revealed valuable insight regarding the looming removal of the water protectors from the DAPL site they are protesting on.

“On Sunday, the U.S. Army Corps issued a declaration to the Standing Rock Sioux Tribe that might have been penned by the Kern county sheriff. The Corps Colonel John Henderson told Standing Rock Chairman Dave Archambault II that the agency was evicting the Dakota Access Pipeline (DAPL) protesters from their camp for their own protection.”

“The tribes and their supporters will be moved to a ‘free speech’ zone a great distance from the pipeline. Henderson’s threats would be troubling if addressed to any group of American citizens, but coming from the U.S. Army Corps to the Sioux nation, it is positively chilling. One wonders whether Colonel Henderson is even peripherally aware of the Corp’s central role in the Indian genocide, the most shameful stain on America’s national experience, our high ideals and character.”

Kennedy then provided valuable insight on genocide, referencing anthropologist Nancy Scheper-Hughes’ observation that genocide is “a continuum that runs for years, decades, or centuries” through the initiation of “marginalization and dehumanization of an identifiable minority, the theft of their lands and property, their slaughter and decimation, and the gradual squeezing of remnant populations.”

What happens then is the transformation of people into monsters that makes discrimination and violence rationalized behaviors.

“Colonel Henderson’s letter manages to be both, patronizing and menacing. In that sense, it captures perfectly the tone and content of a hundred letters received by Indians from U.S. Corp colonels and generals over four centuries, all of them repeating genocide’s persistent refrain: ‘For your own good, move off the land, or else,'” Kennedy said.

He then points out that the lands and waterways that are now in the hands of Dakota Access, a subsidiary of Energy Transfer Partners, are the very same lands that our government and the U.S. Army Corps gave property rights to in the treaties of 1825 and 1851, of which, along with the Fort Laramie treaty of 1868, promised the tribe the lands would stay in the hands of the Sioux tribe “so long as the grass is green, the eagles fly, and the rivers flow.”

“Now, once again, illegal white mineral interests need the Sioux’s land, and, once again, the Army Corps is insisting the Sioux move.”

Colonel Henderson’s threats are meant to protect DAPL’s promoters, Energy Transfer Partners, an outlaw oil company. Construction of the 1,200 mile Dakota Access Pipeline project clearly violates the National Environmental Policy Act, which requires a full environmental impact review for any project that “might have significant environmental impacts” on an area larger than one-half acre. “There is no question that the 1,200 mile pipeline meets both criteria,” Kennedy said.

Kennedy urges that the pipeline will, along with unjustly take away land that is not lawfully permitted to be taken away, will also generate more carbon pollution than “27 coal burning power plants, and cross and disrupt 209 waterways, including Lake Oahe, the Sioux’s only water source.

The Sioux recognize this as the final eviction—without Lake Oahe, their remnant reservation is uninhabitable. The Corp considers a catastrophic water poisoning pipeline failure, so likely, that following protests by Bismarck residents, Henderson agreed to move the pipeline away from its more direct route across the Bismarck water supply and into Indian country.

And so, with so many downsides, what do the people behind DAPL have left to say besides admit to their dirty desire to garner company oil profits? “This project is a 1,200-mile boondoggle designed to allow billionaire investors like Donald Trump to make themselves richer by impoverishing other Americans,” Kennedy explained.

“The company’s claims to be a job creator will wither in the daylight. Like the Keystone XL pipeline, DAPL is unlikely to produce even 100 long term jobs while jeopardizing the water supply for 18 million people and the breadbasket of American food production.”

“Despite its contrary denials to the public and regulators, DAPL has admitted privately that its oil will be shipped to Asia where it will lower manufacturing costs for America’s foreign competitors and aggravate climate chaos. If Obama were to order an Environmental Impact Statement, our incoming president, Donald Trump, would be powerless to reverse that determination. The question now is: Will Obama act?”

Americans are rushing to Standing Rock to support the Sioux because they care about freedom and justice. They are sick of the unjustified profit at the hands of land and people.

“‘I’ll see you at Standing Rock’ has become the battle cry for Americans who still share an idealistic vision for our country,” concluded Kennedy.

Inspired by balance, Alexa finds that her true inner peace comes from executing a well-rounded lifestyle. An avid yogi, hiker, beach bum, music and art enthusiast, salad aficionado, adventure seeker, animal lover, and professional writer, she is an active individual who loves to express herself through the power of words.
_________________________