OUT OF MIND » THE INSANITY OF REALITY » PROTESTS, RIOTS & PETITIONS » #NoDAPL: Why the Black Snake Isn't Slain, ETP Fully Expects to NOT Reroute Pipeline 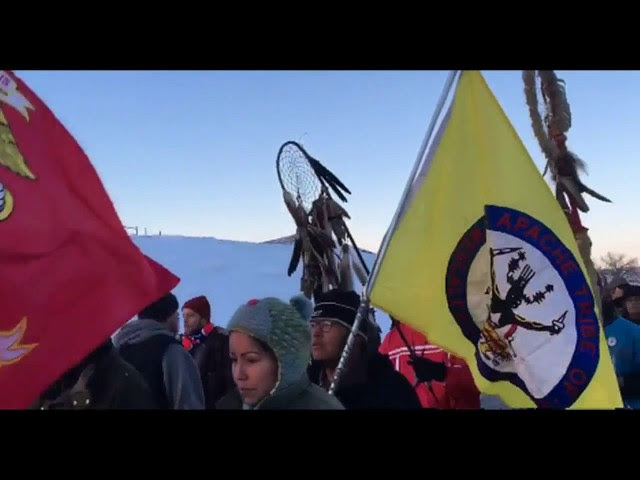 Published on Dec 5, 2016
http://undergroundworldnews.com
For eight months, Water Protectors have held up calls to "kill the black snake" as a battle cry in Standing Rock. The phrase is a reference to a Lakota prophecy that says there will be a great black snake that will run through the land and bring destruction to the people and to the Earth. Now, politicians are being applauded and nonprofits are sending out fundraising emails that claim the black snake is, at long last, dead.

But here's the thing: As long as there is money in this pipeline, there's a good chance oil will follow. I have heard numerous arguments to the contrary, and would of course prefer for one of those arguments to prove true. Some believe that the pipeline will be rerouted, as the Army Corps of Engineers again hinted was possible (a "victory" that would be wholly incomplete, as the movement's goal is to "kill the Black Snake," not resituate it). Others have pointed out that the contracts that have kept the project funded are set to expire in the near future. But history has taught us that the Army Corps' efforts to placate Water Protectors have no substantive value. The idea that this struggle might be resolved by a reroute effort rings hollow after so many months of dangled hopes and ongoing police violence. This administration has taken no concrete action to stop the pipeline, and has once again kicked the can down the road -- this time into the hands of the Trump administration. And while it's true that environmental impact statements can in fact take years to complete, no attention to detail -- either legal or environmental -- should be expected under a president-elect who has promised to govern in the style of an autocrat.

OUT OF MIND » THE INSANITY OF REALITY » PROTESTS, RIOTS & PETITIONS » #NoDAPL: Why the Black Snake Isn't Slain, ETP Fully Expects to NOT Reroute Pipeline