OUT OF MIND » THE INSANITY OF REALITY » GOVERNMENTS & THE NEW WORLD ORDER » Something Going Down on Mexican Border: Masses of “Africans” Mysteriously Appear

Something Going Down on Mexican Border: Masses of “Africans” Mysteriously Appear 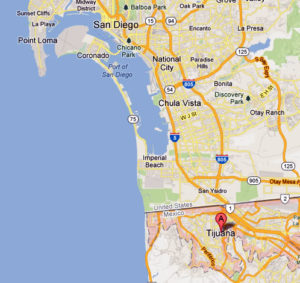 A Mexican YouTuber is bringing an alert via DAHB00777 and I agree, it’s beyond suspicious. Tijuana, Mexico isn’t far from San Diego, California.
There are many links on the Internet to articles documenting Haitians and Africans in Mexico in September and October 2016—even June, so I don’t think this happened as suddenly as it may sound.
I’ve included one article below saying many came from Brazil after they were evacuated from Haiti in 2010 as a result of the man-made earthquake there.
That’s interesting in itself, isn’t it, when we know the NWO plans everything decades in advance?
Goodness knows what they were promised to congregate here without saying a word. Speaking their native tongue of French would be a good clue as to their identity. It would also suggest they are NOT Muslim, but Christian, and likely Catholic.
It’s possible there may be Africans as well, but we’ll see.
http://www.pri.org/stories/2016-10-20/why-haitians-are-stranded-mexico
The cabal has been messing with Californians for some time and may have just amped up the plan of attack. Were all these refugees granted carte blanche to enter the States? They certainly appear to be waiting for and expecting something.  ~ BP

Published on Dec 2, 2016
www.undergroundworldnews.com
This video clip was sent my way in attempts to get more attention on the story. We will be discussing this in more detail tonight on UWN Live On Dahboo77. You can find the original below.
https://www.youtube.com/watch?v=1aGad…
https://twitter.com/dahboo7
https://hangwith.com/user/DAHBOO7

HEY GUYS... PLEASE SHARE THIS WIDELY AS IT IS BEING BLOCKED AND TAKEN DOWN ON SOCIAL MEDIA. THEY DON'T WANT THIS ONE GETTING OUT!! THANKS :)

Re: Something Going Down on Mexican Border: Masses of “Africans” Mysteriously Appear Tue Dec 06, 2016 3:41 pm

- How Many 'Sleepers' Have Gotten Into America The Past 8 Years? By Stefan Stanford - All News Pipeline - Live Free Or Die

Back on December 3rd, Susan Duclos reported in a story on ANP that jihadi compounds within America were stocking up on weaponry and preparing for an 'end times battle'. Only a day later, the Drudge Report linked to a story from the Express called "ISIS Declares WAR On Trump's Inauguration Day Calling It A Bloody Friday" within which we were told communications monitored between members of the group reveal they are planning large scale attacks on that day.

They also reported that ISIS had brought on several new English speaking operatives over the past several months in their bid to make sure that pertinent communicated messages 'ahead of the event' are properly transmitted to their operatives, giving us more indications that Trump's presidency might begin with a 'bang', though not the kind of 'bang' that those who've supported Trump through the election have been hoping for.

The Express also reported days ago that ISIS had made a new video in which they threatened to carry out an assassination upon the president-elect, also threatening other world leaders with assassination attempts. In turn, Trump has vowed to completely defeat ISIS very quickly.

Trump recently made remarks that ISIS would disappear "very, very quickly" under his administration. The President-elect said: "I won't tell them where and I won't tell them how. We must as a nation be more unpredictable."

“Containing the spread of radical Islam must be a major foreign policy goal of the United States and indeed the world.”

We take a look below at several new videos including one from Gary Franchi in which he tells us about a brand new 500-bed 'FEMA camp' in Texas recently opened to deal with the massive surge of migrants attempting to get into America while Barack Obama is still president as shared in this Breitbart story as well as a look at more and more signs emerging that the next 45+ days until Trump's inauguration won't go quietly including some strange happenings at the US border with Mexico. With 'anarchists in black' also threatening to make sure this transition of power is anything but peaceful on Trump's inauguration day as we previously reported in this story about DisruptJ20 on ANP, the final video below shows us as the massive group of migrants that recently flooded the US border with Mexico.

With the 'Disrupt J20 General Strike' set to take place across the nation on Friday, January 20th of 2017, we see the handiwork of George Soros and paid protesters all over the protests that will take place next month and as we can see in their poster above, they expect these 'disruptions' to take place from coast to coast.

From Washington DC to New York city to LA, Chicago, Oakland, Baltimore, Portland, Seattle and Denver just to name a few, almost every major city across the country (that voted overwhelmingly for Hillary by the way) will be a holding a 'group melt down' on that day. Might SJW's and anarchists out in the streets of America be used as cover and useful idiots by ISIS terrorists here in America to carry out their plans that day, with cities and roadways possibly shut down by those who've vowed to 'shut down America'?

Even president-elect Trump has said that current US policies might be allowing a 'trojan horse' invasion of America with a countless number of unvetted refugees being allowed into the country during the past 8 years. How many of those who have been allowed into America and follow radical Islam still have plans to unleash terror upon America? 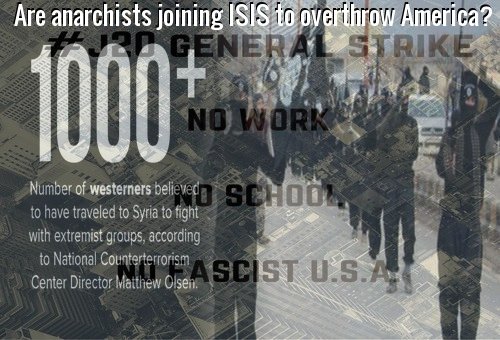 ISIS hates America only slightly more than some Democrats hate America......that's why ISIS still exists....."the enemy of my enemy...."

ISIS? Who needs ISIS? The Democrat party and their mob/protester supporters here in the US are terrorists already - they would be happy to do the job.

Note to our 'friends' in ISIS. On January 20, 2017, you will no longer be dealing with your cousin "Red Line In The Sand" Barack Obama. And if you think Mr Trump is bad, well, you have to meet his new Secretary of Defense "Mad Dog". That one is totally crazy! I hear he eats Muslim ears in pig sauce for breakfast. Just warning. 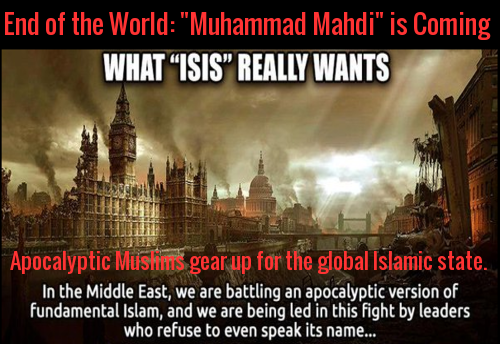 As we have previously reported on ANP many times, ISIS wants Armageddon. A 'final frenzied confrontation' is what they yearn for and an apocalyptic fight is a prophecy they say they’re determined to make real. With Trump promising to put an end to them while putting an end to globalism and the 'new world order' at the same time, we see why so many are now so desperate and why January 20th might be their day to make a statement.

In the 2nd video below we hear from a former DHS official who tells us why Donald Trump must name the Muslim Brotherhood a terrorist organization. As we've reported previously on ANP, currently the Muslim Brotherhood has a seat at Obama's table. In the 3rd video below we hear why the recent terror attack in Ohio may have been linked to a nearby radical Mosque while in the final video, for those who may have missed it, we see a huge group of refugees at the US border with Mexico recently, though the exact date of the video is in question.

OUT OF MIND » THE INSANITY OF REALITY » GOVERNMENTS & THE NEW WORLD ORDER » Something Going Down on Mexican Border: Masses of “Africans” Mysteriously Appear

» Not on our border but on our dime - US Taxpayers fund Mexican Wall
» Here we go... Hundreds of Migrants Try To Storm US Border In California, Border Patrol Fire Pepper Spray Bullets
» Africans Know Ebola and AIDS are Bio Weapons
» “Bill Gates We Are Not Your Lab Rats!” Africans Protest COVID Vaccine Trials Among Poor
»  The Gaslighting of the Masses