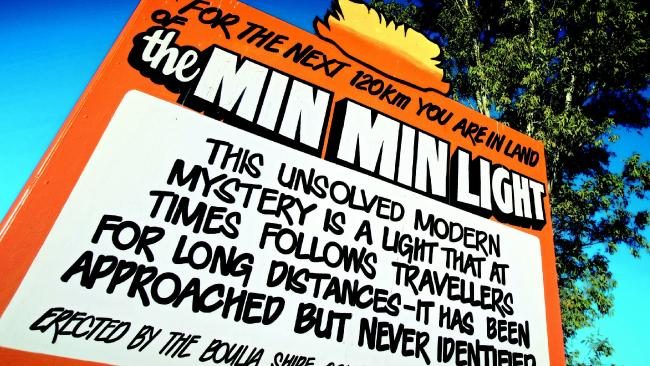 “WE’VE heard about the lights all our lives,” says Genevieve Hammond, who lives in Boulia, an outback Queensland town, 1700 kms west of Brisbane.
Seeing the “eerie” light — often described as intensely bright floating balls — has been said to reduce grown men to tears.
It’s just one example of the folklore that has grown around them. Local kids were warned to behave or the glow would get them; Aboriginal people suspected them of being spirits while local legend decreed if the light ever caught up with you, you would surely perish.
Ms Hammond had heard the stories but she’d never seen the lights until she went camping with her husband John in the vast tree-starved flatness of western Queensland’s Channel Country.
The sky was clear, the night was cold and there was nothing and no one near. Yet the Hammonds weren’t alone.
“We were on a remote cattle station,” Ms Hammond, who runs Boulia’s Desert Sand motel, told news.com.au.
“We were camping out and we saw this greenish oval shaped blurry light bobbing up and down.
“It was parallel to the horizon, about a kilometre away, and seemed to be a metre from the ground. It moved very slowly to the left and then came back on itself and it went on like this for about 15 minutes.
“It was silent and very eerie. We were trying to think, could it be a neighbour? A car?” she said. “But the nearest homestead in that direction was 120 kms away. The next day Johnno went over to where the light was and there was nothing.
“It couldn’t have been anything else, there’s no other explanation, it was the Min Min light.”
Shelley Norton is Boulia Shire Council’s Tourism Officer. In the last year four visitors had reported encounters with the light, she said. “They come in and they don’t know what they’ve seen but you can guarantee that it’s the Min Min light.”
Many visitors come looking especially for the light with the last sighting in September off the Boulia to Winton road.
“A family were camping and the husband got up in the middle of the night and went out to look at what he thought was the moon. Then he turned around and saw the actual moon. It was like there were two moons. Then one disappeared.
“Sometimes it’s a lone object that stays the same distance away, other times it seem to follow people, then splits into two or three and dances above the tree tops,” Ms Norton said.
“It’s very spooky and no one knows what it is.”
Boulia Mayor Rick Britton said the mysterious lights were the town’s claim to fame.
“Everyone has their quirk; Julia Creek has Burke and Wills and Birdsville the races. Boulia is renowned as being the land of the Min Min lights.”
The lights were first reported to have been seen above the ruins of the Min Min Hotel, 100km west of Boulia, in 1918. Although, it’s likely to have been seen by local Aboriginal people long before that.
Since then they have been reported in many parts of the outback but glow ground zero is the Channel Country near Boulia.
There are many theories as to what he Min Min lights are. Fluorescent gases released from the barren earth, clouds of bioluminescent insects, a flock of fireflies perhaps, maybe even UFOs.
But Jack Pettigrew, a neuroscientist at the University of Queensland, thinks he’s solved the riddle.
“I experienced the phenomenon myself as well as hearing about it from graziers.”
He stumbled across it quite by accident more than a decade ago when he was searching for a rare bird that appears only at night near the town.
He and his team saw what they thought were the eyes of a fox reflected in their headlights.
“We were surprised that the bright spot of light was still there when we turned off the headlights.”
In his research paper, Mr Pettigrew described the light as having “fuzzy edges in rapid motion like a swarm of bees”, differing colours and that it moved “with a mind of its own”.
Caught in the Min Min’s glow, grown men could cry, he said.
“They would never be identified but the fear was evident,” he told news.com.au, “It was very scary.”
They’re not spirits or UFOs, said Mr Pettigrew, but they are something very strange indeed.
He believes the lights are a nocturnal form of the rare Fata Morgana mirage, a phenomenon where ideal climactic conditions can see light travel over vast distances and even cross horizons. 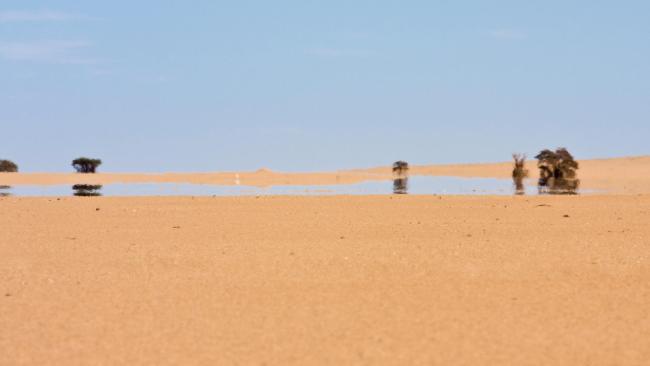 An image of a standard mirage where, typically, hot surfaces appear to be water. Picture: AlamySource:Alamy 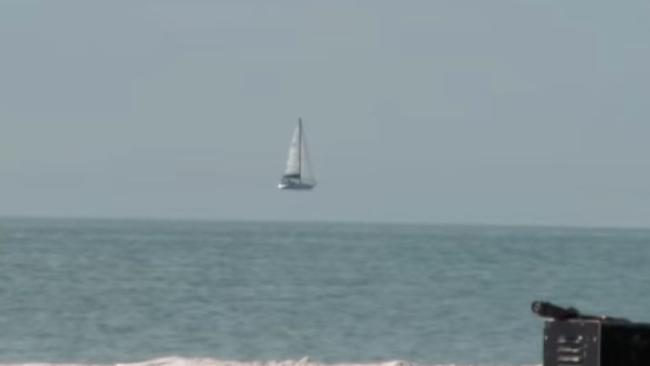 In a Fata Morgana mirage objects can appear far closer then they are in reality and can even seem to float above the horizon.Source:YouTube
The Fata Morgana is thought to be the cause of a range of strange sightings including startled sailors seeing the Irish cliffs appear in the middle of the ocean and beachgoers witnessing boats hovering above the sea.
Queensland is no stranger to odd meteorological phenomenon. Across the Gulf of Carpentaria the unique Morning Glory clouds, perfectly formed and hundreds of kilometres long, roll across the sky.
Mirages are fairly common, such as when hot road surfaces appear to reflect the sky.
But the Fata Morgana only occurs when, unusually, the air is colder on the ground than above. Called a temperature inversion (because air is usually warmer at ground level) under certain circumstances light can be bent across the atmosphere creating projections of images from hundreds of kilometres away that would be otherwise invisible.
Mr Pettigrew tested the theory by driving his car 10km into the desert and parked it behind a small hill to ensure it was completely obscured. 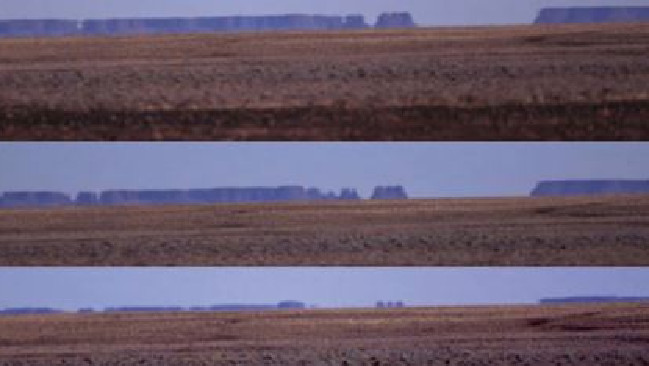 Outside of Boulia, Jack Pettigrew witnessed a classic Fata Morgana where a ridge of far away hills. above, appeared and then slowly melted away. Picture: Jack Pettigrew.Source:Supplied
“When I pointed the vehicle in the direction of the camp, observers saw a light floating above the horizon.” Sure enough the lights changed colour and trembled. When he switched off the headlights, the apparition vanished.
He concluded the mysterious Min Min he originally saw was likely to be the projected headlights from a road as much as 350km way. They later found at a road train had passed along that road at the same time.
The next morning, Mr Pettigrew saw an even more arresting sight. As dawn broke, in the distance, he saw a row of hills where none had existed before. When the ground warmed up the hills – which in reality were far further away – melted into the ground.
While this wasn’t a Min Min it supported his theory that the area was perfect for various forms of the Fata Morgana.
The flat surface and gullies of the Channel Country trapped cold air and threw up less obstacles to block the mirage.
Boulia markets itself has the heart of the land of the Min Min light. Notoriously difficult to predict, a museum in the town — the Min Min Encounter — tells the story of the lights.
Mr Pettigrew told news.com.au he wasn’t convinced the town wanted to find a reason behind the lights and preferred it to remain an unsolved mystery to attract tourists.
But Mayor Britton seemed to be warming to the mirage hypotheses. “The different temperatures in the atmosphere create something like a house of mirrors, like a submarine telescope,” he said.
Nevertheless, some townsfolk had other explanations for the light, Mr Britton said.
“There was an old character here and he said he’d thought a lot about. In his serious opinion it must be — an emu with a torch stuck up his backside.”
Benedict Brook
news.com.au