Yesterday at 8:10 am by PurpleSkyz

» The Moon is About to Pass Through the Earth's Shadow - Penumbral Lunar Eclipse, June 5 2020

Yesterday at 7:10 am by PurpleSkyz

» Easter Island is Far More Mysterious Than We First Thought

Yesterday at 7:08 am by PurpleSkyz

» Alan Watts ~ Returning To The Inner Self

Yesterday at 7:03 am by PurpleSkyz

Yesterday at 6:59 am by PurpleSkyz

Yesterday at 6:58 am by PurpleSkyz

Yesterday at 6:53 am by PurpleSkyz

» 5 Theories About The Universe That Will Blow Your Mind

OUT OF MIND » PERCEPTUAL AWARENESS » OTHER DIMENSIONAL » Nostradamus Predictions for 2017 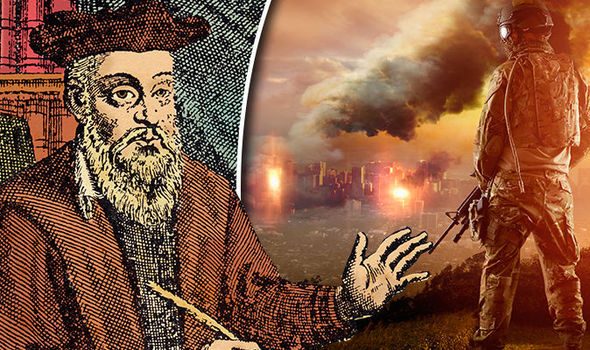 AS 2016 draws to a close, we take a look at which Nostradamus prophecies could come true in 2017.
Michel de Nostredame was a 16th century French philosopher who, according to followers, has predicted many historical events including 9/11, the rise of Hitler and Donald Trump’s presidential victory.
After a year full of surprises and political upsets, believers have looked once again to Nostradamus’ writings to try to predict what the new year will bring.
Look through the photo gallery at the top of this story to find out what Nostradamus’ followers believe could happen around the world in 2017.
On the world stage, China could make bold moves to cure the “economic imbalance” in the world with far-reaching effects, according to believers
Italy could face financial hardship with rising unemployment and loans making it the “epicentre” of a fresh eurozone crisis.
The country looks set to experience economic turmoil and a deepening banking crisis in the wake the Italian referendum result and Matteo Renzi’s decision to resign.
The “current superpower”, believed to be a reference to the US, is expected to become increasingly ungovernable and incompetent in the year that Mr Trump enters office.
Another prophecy is said to predict a new truce between Russia and Ukraine, which will be opposed by the US but embraced by the EU.
In Latin America, Governments are forecast to move away from left-wing policies, which will help set the stage for potential civil unrest.
The most terrifying of the alleged prophecies is a “Hot War” over global warming and diminishing resources, with the greatest threats said to be biological warfare and terrorism.
In terms of technology, Nostradamus predicted that cloud computing would simply become known as computing, solar power would become more widespread, and commercial space travel would take off with orbital flights around the Earth.
Here is a video by Top 5s Finest YoutTube Channel showing 5 Nostradamus 2017 predictions.

5 Predictions of Nostradamus 2017!
Description:
Over the past few years, there have been various predictions that have not only been scary but have also been spot on. Some people claim that way back in 2000, an episode of the Simpsons predicted that Donald Trump would be the president in 2016 and as you have seen, it became true. We have compiled a list of predictions that are bound to happen in 2017 that some people have defined as Nostradamus, in memory of the great French seer. So prepare to be completely amazed with these 5 Nostradamus Predictions for 2017! Lets begin!
1. World War III
Nostradamus was a great French seer who was famed for various predictions during his time. It is claimed that he predicted the great depression, the rise of Adolf Hitler and many other things that later came to pass, including the World Trade Center attacks. He died in 1566 but before then, it is suggested that he also predicted that Donald Trump would be president of the United States. Besides that, conspiracy theorists have also predicted that Donald Trump would start WWIII after he becomes president. The same claimed that Trump would initiate a nuclear war that would bring in many nations of the world. And this…. is bound to happen in 2017. We hope not though….
2. China Will Make Bold Moves
Nostradamus predicted that China will make very bold moves and great strides in 2017. We can already see how china is impacting the global economy. According to Nostradamus, China will be the nation that cures the great economic imbalance experienced in the world. Since 1978, China has moved from being a mere marginal player in the global economy to a mega player with the safest cards to play. Is it also possible that China may become the next super power. We are yet to find that out but if the moves that China has taken in the recent past are anything to go by, then this possibility is not far-fetched.
3. North Korea & South Korea Merger
What is the possibility that North Korea and South Korea will merge? Well, Nostradamus predicted that in 2017, North and South Korea will merge and become one nation. Amidst all these, Kim Jong Un, the North Korean strongman will be dethroned and will run and seek asylum in Russia. Since 2011 when Kim Un took over power from his father upon his death, he has proven to be more dangerous than his father was. He has already executed several people by firing squad, among them his closest family members and relatives. He has already tested a nuclear weapon during this time and threatened to use it against the United States.
4. Italy Will Face Financial Hardship
Nostradamus also predicted that the Italian economy will experience great hardship and will be the reason for the collapse of the EU economy and not Spain or Greek. As you probably didnt know, the Italian banking industry is already on the verge of collapsing. 18 percent of the loans in these banks are already non-performing. In the coming days, it is likely that there will be more and more of the decline in these loans due to a rising number of loans. Reviving this economy will require the sacrifices of many people, including the entire EU…
5. The Third Antichrist
Nostradamus predicted that 2017 would bring the rise of the third antichrist. This rise could actually result in the beginning of World War 3 – a nuclear war or biological warfare that really sustain for 27 years. However, there has been rumors that the war would be started by Russia or China. According to the Nostradamus Society of America, China would team up with a few Muslims countries to destroy Christian countries. Lets just hope this doesn’t happen….

OUT OF MIND » PERCEPTUAL AWARENESS » OTHER DIMENSIONAL » Nostradamus Predictions for 2017