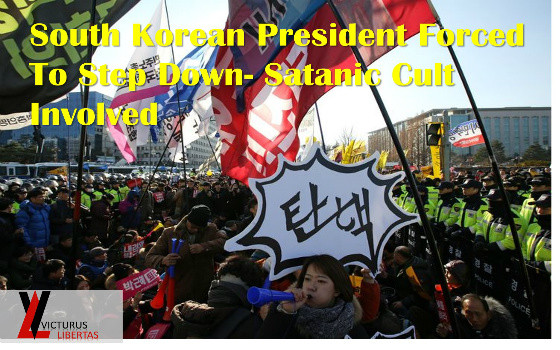 According to LivingResistance, South Korean people are up in arms, after finding out the President is part of a satanic cult and is divulging top secret information to her lover, in exchange for favors and money. 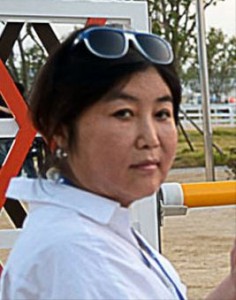 According to sources, the female President of South Korea, Park Geun-hye, was having a relationship with another female named Choi Soon-sil.  Choi Soon-sil is apparently from a billionaire satanic cultist family and has ties to the Clintons, as most other billionaire cultists do.  As their relationship grew, Choi Soon-sil was given top clearance state secrets and million-dollar deals were made with her, at the expense of the South Korean people.  Choi would receive the president’s plan for governance, and ran her own “shadow cabinet” that would give comment on the presidential policy plans.  The net result was astonishing. It appears that Choi was involved in virtually every major policy initiative from the Park Geun-hye administration. Choi even received national security briefings and gave comments on Park’s Dresden speech- the most significant pronouncement of South Korea’s policy on North Korea.
Park Geun-hye allowed Choi Soon-sil to advise her in many areas, including allowing her to channel demonic spirits through her body.  Park had a cable released by Wikileaks in which she says she believed there was “complete control over her body and soul.” 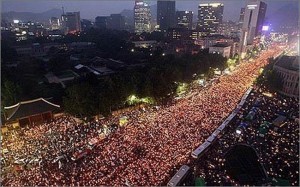 The people of South Korea became enraged when they found out all of this information.  They began rioting, protesting, they filed for an impeachment and have demanded Park step down, to which she has agreed.
This sounds like a very familiar story to me.  I see many similarities in Hillary Clinton sharing state secrets to her aide and female lover, Huma Abedin, who did not have appropriate clearance.  Some also believe Clinton does take part in black magic.
Following six weeks of street protests, South Korean President Park Geun-hye was impeached Friday, by the nation’s National Assembly.  The impeachment vote required at least 28 of Park’s fellow Saenuri Party lawmakers to cross the aisle to make up the majority two-thirds of the 300-seat legislature. The final vote was 234 to 56 in favor of impeachment, according to Time. 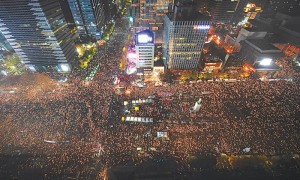 If Park leaves office early, an election must be held within 60 days. She would also lose presidential immunity from prosecution. Prosecutors have named Park as an accomplice in their investigation.
Bloomberg suggests the fall of South Korea’s first female leader, and daughter of former dictator Park Chung-hee, marks another sign of the anti-establishment anger that fueled Brexit, brought Donald Trump to power and toppled Italian leader, Matteo Renzi. Protesters have likened Park’s allies to collaborators under dictators and called conglomerate heads “accomplices,” while a mayor who compares himself to Bernie Sanders has surged in opinion polls for the next president.
Of course, this may be news to people in the United States, as our mainstream media has been relatively silent regarding this world issue.  If any of the MSM have mentioned it, they have conveniently left out the satanic cult aspect of the scandal-  probably because the exact SAME scandals are going on here, and they don’t dare bring that up.
In fact, the New York Post did touch on the story, but called Choi’s father the leader of a “religious cult“… God forbid they call it what it is.  Here is the exact quote from the NewYorkPost:

Choi has been close to Park since Choi’s father, the leader of a religious cult, gained Park’s trust by reportedly convincing her that he could communicate with her assassinated mother. Choi’s father denied this in a 1990 media interview.