The Controllers of the World and 'The Right to Issue' 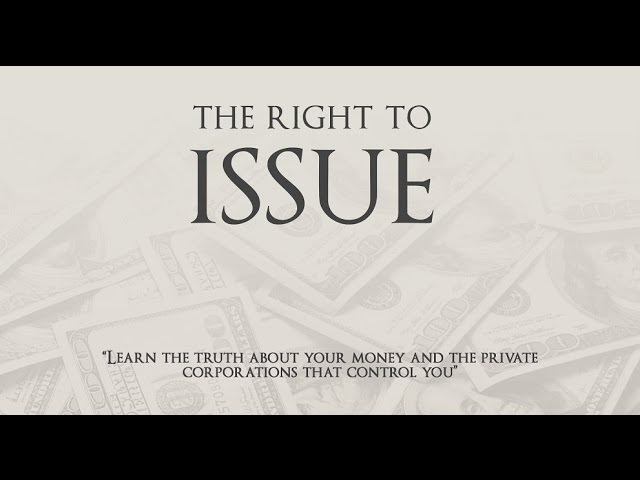 Published on Dec 14, 2016
This talk is the first in a series of installments of an interview that I just did with William Calder, author of an easy-to-read booklet, 'The Right to Issue', for which I wrote the Foreword.

Veteran Marine, former Wall Street currency and bond trader, Calder is now a semi-retired successful investor. He wrote this book because despite the work many people have done to raise awareness about the Federal Reserve Bank, very few have accurately nailed the real problem. In Calder's words:

The United States does not own or issue its currency, the dollar. Most of the world’s countries also do not own or issue their currencies and they're a part of the same Central Banking System that's headquartered in Basel, Switzerland, at the Bank of International Settlements (BIS).

Only three large economies remain outside of this system: China, Russia and Iran. These countries are often framed as "enemies" of the West, despite the fact that there are no open hostilities between the US and these nations and despite the fact that China is the US' largest trading partner. The US buys most of its manufactured goods from US companies which have relocated to China.

This is the basis of the “Endless War” policy of the US, which along with its similarly-controlled allies has systematically toppled the governments of those countries, either not part of the Central Banking System or attempting to break away from it.

Over the past 15 years, many of these countries have been “brought to heel,” including Iraq, Afghanistan, Libya, Egypt, Yemen and Saudi Arabia. Syria is still fighting this, with the help of its ally Russia, one of only three major economies that remain outside of the Controllers’ Central Banking System.

What is the source of this bogus "enmity" between China, Russia and Iran? It certainly has nothing to do with the people of the US against these countries. It has to do with the US' role as the primary enforcer of its Central Bank Controllers.

In 1913, the Controllers began systematically hijacking the U.S., with the establishment of the Federal Reserve Bank. In 1960, the hijacking was complete with the creation of OPEC, whose member states possess 73% of the world’s “proven” oil reserves. OPEC mandates that all petroleum purchased from them be done with U.S. dollars. Remember, the US does not own or issue the dollar.

The "Perpetual Wars" in the Middle East have been successful at either installing or maintaining Central Bank control of these OPEC members. Only Syria continues to resist, with the help of its non-central bank ally, Russia.

The US' sabre-rattling and/or sanctions will continue toward China, Russia and Iran because the US must remain the primary enforcer of the Central Banks' will, if it is to remain the Top Dog on the world stage – but it will only continue to do so at the sole pleasure of their Controllers – because, with over 20 trillion dollars of debt, who knows how long the center can hold?

Author, Bill Calder explains this seemingly intractable situation in very simple terms and its surprising solution in 'The Right to Issue'.