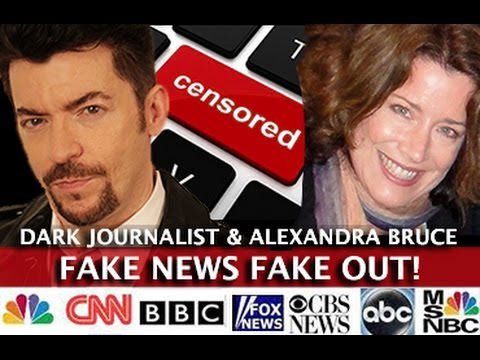 Desperate Mainstream Media Attacks Independent Journalists
In this Media Attacks Special Report, Dark Journalist Daniel Liszt welcomes back dynamic author and the publisher of the ForbiddenKnowledgeTV website Alexandra Bruce. In the wake of the desperate attempts by the Corporate Media to portray the Alternative Media as dangerous to try and stave off their own massive plunge into irrelevance, the media establishment is now trying to hide their failed attempts to manipulate the Presidential Election and put Neocon Democrat Hillary Clinton into the White House with the help of fake polls, biased reporting, behind the scenes collusion and false memes.

Their solution, coordinated at a high level with Social Media figures like Facebook CEO Mark Zuckerberg and funded by shady covert actors, like billionaire activist George Soros, was to create a new meme called ‘Fake News’ to label independent sites and citizen journalists who expose their unethical behavior and report news in an unfiltered way to the public as a threat to democracy.

Smear Campaign
Their slanderous smear campaign has reached a new low with the publication of a McCarthyite list of Alternative Media websites in the Washington Post that were supposedly in league with Russia according to a discredited website called PropOrNot (Washington Post eventually added an addendum to the article featuring the list saying they couldn’t vouch for the source). The pathetic attempt to create a conspiracy theory that paints the brave independent voices who give the real truth to their readers with minimal resources as somehow traitorous, harkens back to the red scare tactics of the 1950’s and shows that the Mainstream Media is caught in a death spiral.The shocking disinformation tactics show they are unsure of how to redeem their falling numbers, bailing advertisers, and destroyed reputation that is in tatters especially since they unabashedly lied to the American people during the election in order to curry favor with the corporate power brokers that are attempting to install a Global Government.

Alexandra sees a coordinated campaign targeting Independent Media financially, and trying to shut as many of them down as possible by blocking them on Facebook, Twitter and other Social Media outlets. Whether you’re a Liberal Democrat shocked by the media character assassination of Bernie Sanders, a Libertarian repulsed by the intrusion of the CIA into the limelight with false propaganda about Russia, an Independent disturbed by the use of the Green Party and Jill Stein as puppets with behind the scenes Clinton-funded recounts to delegitimize the election, or a Republican shocked by the threatening pressure on electors and 24/7 negative coverage of President-Elect Trump, now is the time to unmask the cowardly trolls in charge of the Corporate Mainstream Media and reveal them as the true purveyors of 'Fake News.'