OUT OF MIND » SUPER SCAMMERS!! RV & DINARIAN FRAUDS & THOSE THAT BUST THEM OUT! » RAMBLERNASH - THE GURU HUNTER » Major Reset of Currencies Worldwide Happening Now

Everyone seems to be talking about a collapse or death of the Dollar. Learn how to prepare for a possible collapse scenario by clicking HERE and read my guide.

Hi everyone, Nick here, and as you can probably tell, there have been a number of currencies that have, since November, gone through significant changes. 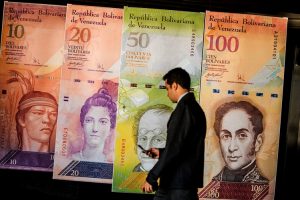 Sign up here for the FREE Global Currency Reset Newsletter!  Get updates delivered directly to your inbox.
Email:

We respect your email privacy
Powered by AWeber Email Marketing
Last Updated On: December 22, 2016
By: Nick Giammarino
Global Currency Reset Newsletter – CLICK HERE TO SUBSCRIBE TO THE FREE GLOBAL CURRENCY RESET NEWSLETTER
The ‘strong bolivar’ has lost 45% of its value this month
Rapid devaluation to stoke inflation already in triple digits
Venezuela’s currency – the so-called “strong bolivar” – is weakening beyond levels that analysts had forecast just a few weeks ago as an expanding money supply chases a limited amount of U.S. dollars.

The currency has lost 45 percent of its value so far this month to trade at 2,753 bolivars per U.S. dollar on Thursday, according to dolartoday.com, a widely-watched website that tracks the exchange rate in Caracas. That’s the biggest monthly decline ever, according to data compiled by Bloomberg. 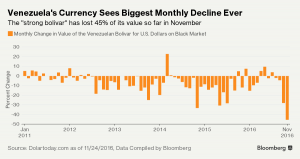 Inflation in the country will likely rise to 400 percent in 2016, according to the median estimate of 13 analysts who responded to a Bloomberg survey. Individual responses ranged from 257 percent to 1,500 percent.
Venezuela’s money supply has risen 127 percent over the past year, according to the latest data available from the Central Bank in Caracas and compiled by Bloomberg.
Venezuela’s Currency Just Had the Biggest Monthly Collapse Ever
https://www.bloomberg.com/news/articles/2016-11-24/venezuela-s-currency-just-had-the-biggest-monthly-collapse-ever?cmpid=socialflow-facebook-business&utm_content=business&utm_campaign=socialflow-organic&utm_source=facebook&utm_medium=social
Venezuela’s Currency Is Collapsing on the Black Market Again
https://www.bloomberg.com/news/articles/2016-11-01/venezuela-s-currency-is-collapsing-on-the-black-market-again
Venezuela’s currency is so weak, shopkeepers have taken to weighing it. In 2015, the black-market bolivar frequently fell more than 10 percent a month. In the six months through September the black-market currency actually appreciated, even as prices for unregulated goods began to skyrocket. The calm ended in October, when the bolivar lost almost a third of its value compared to the U.S. dollar in a matter of weeks.
Actual exchange rate against US Dollar: 1 USD =9.97480 VEF basically, one United States Dollar equals about 10 bolivars.
Black Market rate:

Congratulations To Venezuela: Bolivar Notes Are Now Worth Less Than It Costs To Print Them
http://www.forbes.com/sites/timworstall/2016/05/04/congratulations-to-venezuela-bolivar-notes-are-now-worth-less-than-it-costs-to-print-them/#4ab4c4ad32c3
Except how much is a 100 Bolivar note worth these days? At the real, free market (for which read black market) rate of 1,100 or so to $1 US, that’s some 9 cents (9.09 for the accurately inclined). Which is alarmingly close to our presumed production cost, isn’t it? Rather below it in fact. Which means that we’ve got the amusing if alarming thought that if Venezuela were in fact to order more 100 Bolivar notes then they would be, because they have to use the international firms, swapping widely usable US dollars for very much more restricted use Venezuelan bolivars of less actual value.
http://www.forbes.com/sites/nathanielparishflannery/2016/12/21/what-do-investors-need-to-understand-about-venezuelas-economic-crisis/#2614eec67ace
Venezuela will print a 20,000 bolivar note after hyperinflation turned its currency into worthless pieces of paper.
The central bank said Sunday it will issue six new bills starting Dec. 15 worth between 500 and 20,000 bolivars. That’s 200 times the biggest note currently in circulation — the 100 bolivar.
Hyperinflation means very little can be bought with 100 bolivars, which is officially worth 15 U.S. cents, or just 2 cents based on widely-used unofficial exchange rates.
The currency collapse means people are having to carry their money around in bags, rather than wallets.
http://money.cnn.com/2016/12/05/news/economy/venezuela-new-20000-bolivar-note/
Inflation in Venezuela is expected to rise to nearly 500% this year and to a whopping 1,660% in 2017, according to the International Monetary Fund.
In November alone, the bolivar lost more than half of its value. One U.S. dollar buys 4,400 bolivars on Monday, according to Dollartoday.com.

Thanks to Nick at: http://globalcurrencyreset.net

OUT OF MIND » SUPER SCAMMERS!! RV & DINARIAN FRAUDS & THOSE THAT BUST THEM OUT! » RAMBLERNASH - THE GURU HUNTER » Major Reset of Currencies Worldwide Happening Now