257 Earthquakes Over Magnitude 5 In 9 Days 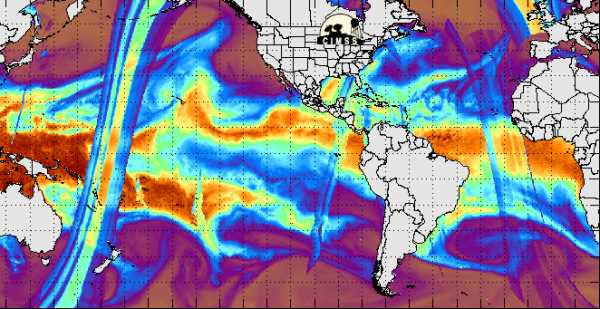 By Luke Miller Truth Theory
Firstly I would just like to say, this article is not being put here to instill fear in anyone, it is hard not to be a little shaken by what has been discovered, but there are people who understand what is happening and we have the power as the people to give those who have this knowledge a platform.
The problem with a lot of mainstream media is they speak from a fear based perspective and offer very little in the way of solutions, and while I don’t claim to have the solution to this issue, if we band together and unite we can certainly attempt to find one.
I recently watched a video, which I have to be honest I struggled to understand with any real clarity to start with. But as I went over it it made a little more sense. I will summarize for those of you who don’t want to sit through the whole video.
There has been a large wave of energy that was unintentionally picked up by the MIMIC TPW microwave background imagery.

The glitchy curved lines that appear across the screen are the large waves of energy in question. In the video from Dutchsinse.Com he has said-
“This system usually only shows precipitation / water vapor , yet in some rare instances large energy returns can be seen when solar, spaceweather, and other energy events impact the planet.
We have seen examples of X class flares, and large Earth facing Coronal Mass Ejections cause large disruptions of this very same feed — however this “wave” of energy produces a return that crosses the same bandwidths detected (and used by) the MIMIC microwave background system.
The energy spans the planet on both (all) sides over several hours time. This wave of energy started to form on 12/18 at about 15:00 UTC, and is currently ongoing.
A check of the X-ray flux monitors from GOES shows low activity, minor solar winds, no major solar storms, Total Electron Content in the ionosphere shows “minimal”…. thus the source / cause of this event is still “unknown”.
If this “event” really occurred (if it’s “real”) then we’re looking at a huge amount of energy impacting the planet causing a planet wide microwave return going off the scales.
Microwaves convert to DC energy in a natural “rectenna” process when the waves become trapped in the Earth’s magnetosphere– the radio waves convert to DC power, and are taken to ground. Ground ultimately being the core of the Earth.
If the event is really occurring, then the potential amount of energy going to the core of the planet would be tremendous — this of course could increase volcanic activity, and cause large earthquakes.
I don’t know what to make of this — this is the first time I’ve ever seen something this large over such a vast area show up on MIMIC like this.”
The website which picked up this activity has issued a notice saying “2016 Dec 22: We’re seeing a long segment of bad data being wrapped into this product every few days. This comes from a glitch in the incoming satellite data. For a more accurate representation during those times, try the MIMIC-TPW2 product .”
However since this event there has been an influx of earthquakes over the globe with the latest being a 7.6 magnitude earthquake in Chile at 14:22 Christmas day local time. But this is not the only event since this activity has been picked up-
There have been 257 earthquakes over magnitude 5 and many more very close to this number. Just to put this into perspective on average there is an estimated 3.6 earthquakes  of a magnitude of 5-5.9 a day, in the last 9 days there have been an average of 24.8 nearly 7 times what is usual. It is estimated there is a  6-6.9 magnitude earthquake every 3 days, we have had 2.6 a day for the last 9 days. Lastly for the big earthquakes of magnitude 7-7.9 you usually get 1 every 25 days (estimate) there have been an average of 1 a day for the last 9 days.
Obviously there are going to be moments when activity is higher, but given the fact that this video predicted it before hand and on the date of this video there was 71 earthquakes over a magnitude 5, we have to question the statement. Perhaps it is a type of energy they do not understand.
You can view the earthquake reports here

It will be interesting to see how the next few days unfold and we will keep you updated on the progress. Much love, Luke
I am Luke Miller the author of this article and creator of Potential For Change. I like to blend psychology and spirituality to help you create more happiness in your life. Grab a copy of my free 33 Page Illustrated eBook- Psychology Meets Spirituality- Secrets To A Supercharged Life You Control Here
THIS ARTICLE IS OFFERED UNDER CREATIVE COMMONS LICENSE. IT’S OKAY TO REPUBLISH IT ANYWHERE AS LONG AS ATTRIBUTION BIO IS INCLUDED AND ALL LINKS REMAIN INTACT.