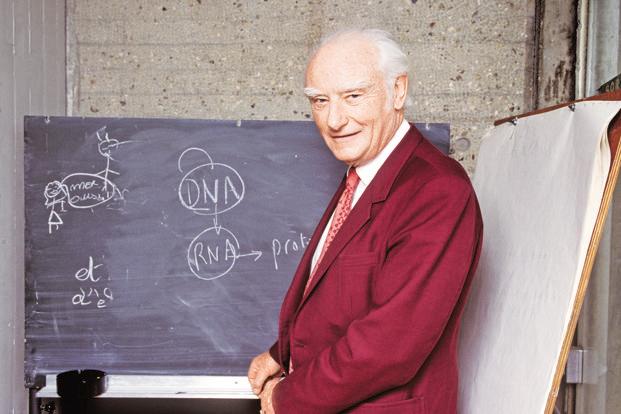 Francis Crick (8 June 1916 — 28 July 2004) was an English scientist who was most noted for being a co-discoverer of the structure of the DNA molecule in 1953 alongside James D. Watson.
advertisement - learn more

Francis Crick Watson and Maurice Wilkins were jointly awarded the 1962 Nobel Prize for Physiology for Medicine “for their discoveries concerning the molecular structure of nucleic acids and its significance for information transfer in living material.”
He was clearly a brilliant scientist who unfortunately, like many other brilliant minds who came up with theories that challenged the accepted frameworks at the time, wasn’t given much ‘press.’
In his book published in 1982, Life Itself, he argues that there is no possible way that the DNA molecule could have gotten its start here on Earth and that it had to have come here from somewhere else. Within the mainstream scientific community, the generally accepted theory is that we are the result of a bunch of molecules accidentally bumping into each other, creating life. However, according to Francis, we are the result of what is now known as Directed Panspermia. Crick and a British chemist, Leslie Orgel, published their paper on it in July of 1973.
Their theory explains that, “organisms were deliberately transmitted to earth by intelligent beings on another planet. We conclude that it is possible that life reached the earth in this way, but that the scientific evidence is inadequate at the present time to say anything about the probability. We draw attention to the kinds of evidence that might throw additional light on the topic.”  (source)
As far as Crick’s thoughts on the theory that we are the result of accidentally  bumping into each other, he thinks this was as likely as the assembly of a jumbo jet hit by a hurricane in a junk yard. In other words, he thought the theory held little to no credibility.
advertisement - learn more

When it comes to Crick’s theory, there have been some who expanded upon his work and have actually found evidence of it. Perhaps Crick had some evidence or he was able to connect some dots? After all, theories like this aren’t just born out of nowhere and this gentleman won the Nobel Prize for the study of DNA. Thoughts like this should not be taken lightly and evidence should be examined to see if it’s a plausible hypothesis.
Please keep in mind while reading this article that, although we’ve discovered much, we have yet to identify the biological functions of large portions of our DNA. There is so much mystery wrapped in what could possibly hold the answer to life itself and the origins of the human race.
A few years ago, Chandra Wickramasinghe, the Director of the Buckingham Centre for Astrobiology at the University of Buckingham in the U.K., published a paper regarding their supposed findings of the first-ever evidence of extraterrestrial life found in a celestial body.
At the time, Wickramasinghe pointed out to Huffington Post how, in 1962:


“Hoyle and I pioneered the theory of carbon grains in space to replace the old ice grain theory. This was vehemently resisted by the astronomical community at the outset, but with the dawn of infrared spectroscopy, the ice grain theory gave way to the carbon dust theory. Over a few years, after a great deal of model-fitting, we came to the conclusion that material similar to biomaterial fitted all the available data in astronomy. We considered the possibility that microbiology had a universal character, and no observations in astronomy or new information from biology has provided contrary evidence.If only ideas that are considered orthodox are given support through award of grans or publication opportunities, it is certain that the progress of science will be stifled as it was throughout the middle age.”
English Astronomer Sir Fred Hoyle and Wickramasinghe are considered co-developers of the panspermia theory. In another paper that Wickramasinghe co-authored in 2012 titled “Non-terrestrial origin of life: a transformative research paradigm shift,” he points out that, “For nearly five decades, evidence in favour of a non-terrestrial origin of life and panspermia has accumulated which has not been properly assessed. A point has now been reached that demands the serious attention of biologists to a possibly transformative paradigm shift of the question of the origin of life, with profounds implications across many disciplines.” (source)
It’s interesting to think about, isn’t it? We are indeed, as Author Graham Hancock noted, like species with amnesia. We still don’t completely know where we came from and how we got here.

“There is a serious possibility that we are being visited and have been visited for many years by people from outer space, from other civilizations. That it behooves us, in case some of these people in the future or now should turn hostile, to find out who they are, where they come from, and what they want. This should be the subject of rigorous scientific investigation and not the subject of ‘rubbishing’ by tabloid newspapers.”  (source)
The quote above comes Lord Admiral Hill-Norton, the former Chief of the Defence Staff and 5 star Admiral of the Royal Navy. That’s the highest possible rank of the British Royal Navy, similar to General Dwight Eisenhower’s 5 star rank in the United States. He was also Chairman of the NATO Military Committee. These are definitely positions to be ‘in the know’ about what is going on, at least to some extent.
If you are unaware, there have been hundreds of witnesses carrying impressive backgrounds that have been in the position to ‘know’ about these things. To compliment this testimony, we also have evidence in the form of documents from several different government/military/intelligence agencies.
Given this evidence, the possibility that this is happening is very real and if you’d like to read/learn more about this topic, you can start off by visiting the exopolitics section of our website. There you will find our most recent articles on the subject, dated back to the very first one we ever wrote.
Personally, when I think of all of the evidence that’s surfaced within the past few years alone, it’s mind-altering. If you’re interested, you will have to do your own research. If you don’t, next time somebody brings up the subject, it’s good to keep an open mind and at least acknowledge that yes, this is actually a strong possibility.
I’ll leave you with this last clip from the Thrive documentary, of the late great Dr. Brian O’Leary, a former NASA astronaut, one of many astronauts who has spoken out enthusiastically about this subject and the evidence behind it. My apologies if you’ve already seen it, as I’ve used it numerous times in previous articles.
https://youtu.be/yO0T05kQkbs