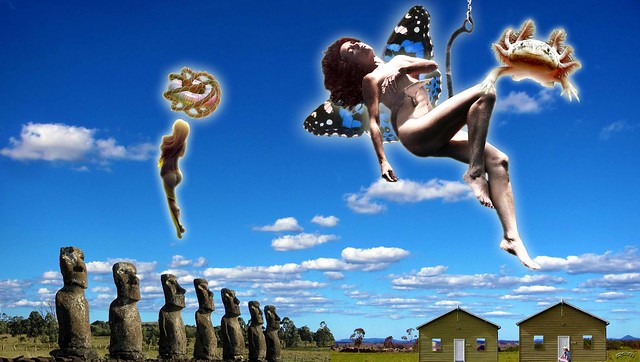 by Star Larvae
As waking and sleeping converge in the enriched brains of our extraterrestrial descendants, the conscious and unconscious experience of those descendants should fuse into an undifferentiated mode of subjectivity.

Immersive media look like they're just about ready to facilitate the colonizing of the dream state. Already, digital wizardry approaches in style and content the surrealistic hyper-reality of the dream. Hollywood movies, with increasing fidelity, capture the unearthly fly-around perspectives and temporal elasticity of dreams. In its advertising, television, notably when promoting sugar to children, evokes the zany, weightless world of dreams.


For its part, the dream world acknowledges new technologies as they come on line. Cars, airplanes, telephones, radios, and now computers insinuate their ways into the dream milieu. Surrealist fantasies of a culture of the unconscious look today like a premonition of the computer age, in which any scene or sound can morph into any other.

But the extroverted among humankind’s extraterrestrial descendants might cringe at the prospect of terminal, albeit spectacular, introversion in the dream, even the lucid dream. For the extroverts, the networked dream might provide relief. Space brains will have at their cortex tips access to uncharted frontiers of expression, gregariousness, and interpersonal fusion.

Through virtual reality (VR) technologies, weightless dreaming becomes a social medium. VR systems are sensorimotor-feedback setups that link users and computers in information-exchange loops. The motions of the users are fed into the computers, which respond by sending appropriate signals back through visors and headphones and potentially other interfaces. The signals—translated by the visors and headphones into synthetic sights and sounds—give users the impression that they are interacting with a physical environment. But the environment exists only as a computer program and a sequence of perceptions. Nevertheless, the virtual world can be shared by as many inhabitants or visitors as the available computing power and bandwidth can support. Pokémon Go is a baby step along the path. (Variations on the VR concept are sometimes called telepresence or tele-immersion.)

The phenomenology of dreams segues naturally into that of virtual reality. Dreams and virtual realities are interactive and immaterial, though phenomenologically habitable, spaces. The literature on therapeutic and recreational VR applications seems modeled after that of dreams, especially that of lucid dreams. Themes of conflict resolution and wish fulfillment are prominent in descriptions of the virtues of both worlds. If Marshall McLuhan’s technological prostheticism struck near the mark, and electronic media extend into the physical world the collective patterns of human subjectivity, then VR technology extends specifically the capacity for lucid dreaming, not particularly into the physical world, but into the collective experience of the networked community.


"A biotechnical, and not merely biochemical, straitjacket, whereby the psychophysiology of an individual's behavior would be permanently relayed to instantaneous information capabilities, his/her body wired with electronic pathways that would extend the nervous system. [. . . . ] Once this happens, adoption of a sedentary life tends to become final, absolute, since the functions traditionally distributed within the real space of the town are now exclusively taken over by the real time of the wiring of the human body."

"The real is produced from miniaturized units, from matrices, memory banks and command models—and with these it can be reproduced an indefinite number of times. It no longer has to be rational, since it is no longer measured against some ideal of negative instance. It is nothing more than operational. In fact, since it is no longer enveloped by an imaginary, it is no longer real at all. It is a hyperreal, the product of an irradiating synthesis of combinatory models in a hyperspace without atmosphere."

Virtual realities can only become increasingly engaging as they gain resolution and responsiveness. The prospect of VR technology accessorized with brain sensors, such as those used in EEG monitoring, let alone brain implants, suggests the potential for a new level of intimacy of shared experience. Mythic forms from the unconscious will be available as blueprints for a cosmic arcade in which experiences are manufactured from such stuff as dreams are made of.

One potential of VR has been thrown under a sobering light by writers of cyberpunk science fiction. The Gothic-styled genre of high-tech low-life takes its dystopian inspiration from the familiar scene of glazed-over couch potatoes. Cyberpunk writers have seen the implications of tomorrow’s tech: bodiless brains suspended in nutrient vats, networked and synchronized with other vatted brains. The cyberpunk genre’s Gothic stylizations can obscure the astuteness of the vision, namely the insight that urbankind already consists of networked brains in vats on wheels. One need only notice one's co-motorists fumbling with their phones to recognize it.

" presented the brains-in-vats scenario to a large audience. The movie's premise involves the subjugation of humankind by a race of malignant machines. The premise is taken to an extreme in which the ruling machinery cultivates human beings as an energy crop. Each head of human livestock is raised in a life-support pod, fed artificially, and tapped like a battery for excess metabolic energy. But the citizen slaves believe themselves to be living normal lives, thanks to a shared virtual reality piped into their brains. Little imagination is needed to recognize in this arrangement today's corporate cubicle farm, in which networked human livestock productively ruminate, their energies drained to feed the demands of their various masters. And the growing number of debt slaves who occupy today’s protoMatrix do so largely in a state of pharmacologically induced complacency, thanks to a pharmaceutical industry eager to lavish antidepressants and anti-anxiety drugs on a spiritually eviscerated workforce.

But the machines of the developing matrix need not exert their control coercively, as they do in the films of the Matrix series. Human beings eager to enter the pods, whether on Earth or in space, will be easy to find. Many minds conditioned by an entertainment industry to despise the humdrum and by an advertising industry to crave novelty find synthetic realities to be as appealing as anything that exists outside of cyberspace.

An eagerness to transcend the meatbot by plunging into a comprehensive environment of synthetic inputs expresses itself through the ambitions of transhumanism, a movement that advocates plunging headlong into as technologically mediated a reality as can be engineered. Transhumanism's selling points revolve around technological enhancement of human faculties and experiences, the enhancements intensifying until reaching a breaking point: the vaunted "Singularity," a secular rendition of Heaven/Nirvana.

That oligarchs would encourage their subjects to embrace a programmable digital infrastructure, thereby further empowering the oligarchs, seems not to occur to transhumanist enthusiasts.

It might be only in the unwieldy vastness of space, in a prosperous solar economy, that communities will be able to pursue destinies independently of the evolving global power elite. Once again, self-directed freedom-seekers might need to tackle a frontier to secure their autonomy.

On the optimistic side, and with noetic prescience, Marshall McLuhan glimpsed the light at the end of the postmodern tunnel. In Understanding Media: The Extensions of Man

he summons an epiphanous image:


"If the ultimate reality and therefore our own deepest nature is creativity, then to 'obey' it means not to give complete allegiance to any of creativity's past products, be they scientific ideas, religious dogmas, political institutions, or economic systems. Likewise, to 'obey' the will of God for our lives is to become more rather than less creative. True obedience is therefore manifested in a life of maximal creativity."

— David Ray Griffin
God and Religion in the Postmodern World

"Today computers hold out the promise of a means of instant translation of any code or language into any other code or language. The computer, in short, promises by technology a Pentecostal condition of universal understanding and unity. The next logical step would seem to be, not to translate, but to by-pass languages in favor of a general cosmic consciousness which might be very like the collective unconscious dreamt of by Bergson. The condition of 'weightlessness,' that biologists say promises a physical immortality, may be paralleled by the condition of speechlessness that could confer a perpetuity of collective harmony and peace."

McLuhan’s early grasp of what later would be called cyberspace may have been a reaching for the phenomenology of outer space. In the passage above, he proposes that technology has as its covert aim the engineering of a kind of rapture. Humanity's collective calling may be to fabricate the communion of angels by evolving into it. Evolving into angels—or whatever label best suits our extraterrestrial descendants—will require letting brain circuits express themselves fully by letting them take shape weightlessly.

"The new media are not bridges between man and nature:
they are nature."
— Marshall McLuhan
Counterblast

Humanity's complex of devices and programs and the extensions of that technological complex yet to come can be seen as humankind’s attempt to engineer around itself an omnipotent, omniscient, and omnipresent parent. This Freudian ambition has as its goal the preserving of humankind's posthuman descendants in a state of retarded, neotenous, development. On Earth, this program threatens to impose the nightmare scenario of a global technocracy perpetually exploiting it pharmacologically anesthetized drone-citizens. In space the program plays out as a metamorphosis of humans into the angels of the religious imagination. 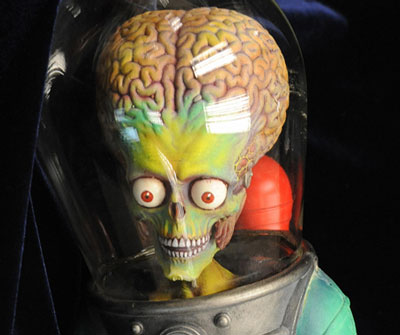