Tens of thousands of dead starfish wash up along the Dutch coast! "Dead starfish as far as the eye can see! 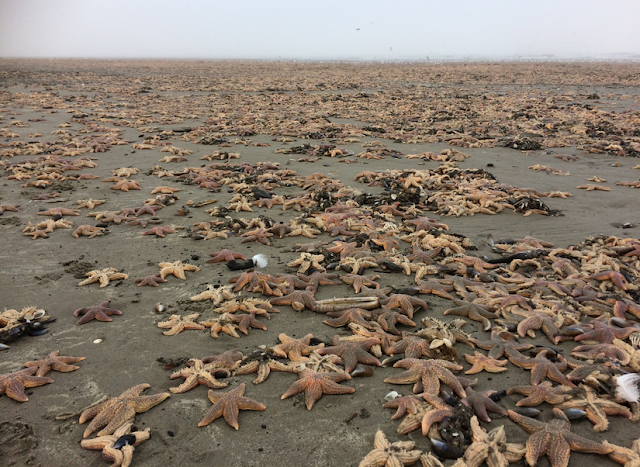 Dead starfish as far as the eye can see. Photo: Martin Kool

Tens of Thousands of dead starfish have been washed up on the beach near the seaside resort of Callantsoog, just 20 minutes from the home of The Big Wobble, the dead starfish stretch further than the eye can see!
Only those close to beach pavilions are being cleared up.
The dead sea creatures will be cleared from a 2km stretch of strand to stop the smell disturbing winter beach goers, Schagen council said on Thursday.
The starfish were washed up along several parts of the North Sea coast earlier this week.
Arthur Oosterbaan, of the marine research group Ecomare told local broadcaster RTVNH strong winds have stirred up the water and the low temperatures made the starfish sleepy and unable to stay on the sea bed.
They were then brought up by the tide.
Mass starfish strandings happen fairly rarely. In December 2014, an estimated 100,000 starfish were washed up on a beach in South Carolina.
In 2012, some 50,000 were stranded on an Irish beach. Full story Dutch News 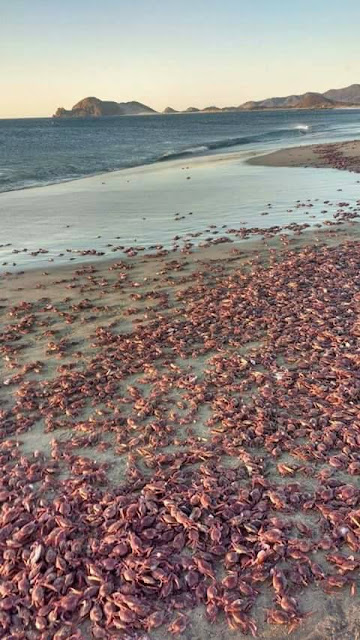 An astonishing and unexpected spectacle was experienced this morning a south western port of Mexico, with the appearance of tens of thousands of crabs on the shore of the beach of the municipal agency of Salinas del Marqués.
The phenomenon, according to the local people, is due to the currents of cold water that causes the crustacean to look for the shore and the waves expel it to the beach.
The apparition occurred on the salt flats of the Salinas del Marqués, where hundreds of people came to appreciate the fact. Some families were collecting them and carrying them, in buckets, jabas or coolers.
This is the first time that this phenomenon occurs, two years ago dead fish also appeared on the shore of this beach.

» Sirius and mass Star Gates opening up and TRANSFORMATION FOR PLANET EARTH!
» DR.WC: “When GCR Announced, There Will Be Mass, Mass,Mass Arrests (of members of Congress, the White House and the Senate,etcs)”
» Last of the Seed Collecting & Most Bitter Crab, Vin
» The Crab Nebula Just Blasted Earth with the Highest Energy Photons Ever Recorded
» Crop Circles 2022 - Enmill Barn, Nr Crab Wood, Winchester, Hampshire. Reported 24th April