Two UFOs streaking across the sky over the Popocatépetl Volcano, Mexico during beautiful Sunset

A beautiful sunset over the Popocatépetl Volcano in Mexico and two UFOs which rapidly streaking across the sky has been captured by the volcano’s webcam on January 2, 2017. 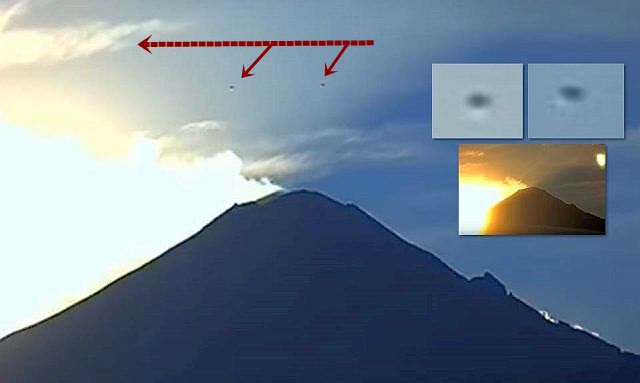 Given the high speed of the UFOs, they can only been seen in a split second at the 1.56 mark in the video.

In addition, one may wonder what the bright orb on the right might have been during the sunset.

Although some people suggest that it was a third UFO, this light to the right was the reflection of the sun in the camera, and when a flash from the sun at the end took place, the light in the reflection went out at the same time.

Published on Jan 3, 2017
Many people still doubt the existence of a flying saucers, but
I tell you, just wait until they appear in large quantity. Around
the entire planet will demonstrate their ability to fly, their appearance and disappearance.
In a way that confuses people into the
large extent, that no one really
understand what is happening. It has been written that the sky will "sign". This "sign" already seen a lot of people, but by the end of this age will see it every man of the earth and will be surprised"
Corpuscular ship is constructed in detail in accordance with the law of God in the form of light energy. Light corpuscular ship is therefore better as a spiritual power manifested corpuscular ships. The ship can move faster than light. When the object moves faster than light, disappearing from sight. Goes into another dimension.
The human eye sees everything that is inside of the light spectrum. When I mention the light spectrum and hit the light spectrum of the sun. With increased intensity of light would blind man. His senses would not notice a higher form of vibration. It can not therefore see the world resulting on a different frequency, although located around beside him. Corpuscular ship can move at high speed. It is therefore invisible to the human eye. By increasing the energy of the corpuscular vessel there is an increase of its speed. If it goes into the vessel by its frequency, it means that moves slower than the maximum speed. This makes it the human eye sees. It manifests itself in the form of light. Reducing the speed to changing light and the human eye, the ship must appear as a solid object. If the moving ship and if it stays on the molecular level, the maximum rate will remain invisible to the human eye. That they are explained in words that corpuscular ship may be the front door of your house and you will not see it. The ship can come to a man secretly. People of it may remain hidden from man.
The people of the corpuscular vessels reduces its frequency to a protein molecule in the cell become visible to the human eye. They therefore come secretly and suddenly appear before you in the form of light and energy. At that moment comes the light source, the energy in the form of spirit. You will be influenced by your spirit will be affected the most energy, which manifested itself around you and you will be allowed contact with corpuscular ships. In contact with them you should not worry. Believe me, it's something natural. There is nothing mysterious. Only one who manifests the spirit of mentally able to take this energy will be able to experience the transition from one age to another.

Published on Jan 3, 2017
...Nasa claims that this video are clouds moving over the surface of Titan... But theTime lapse video from Nasa shows a triangle alien craft taking off from Saturns largest moon ,Titan...This video is shown in its original speed then at 25% speed.Stills and color images are included in this video... 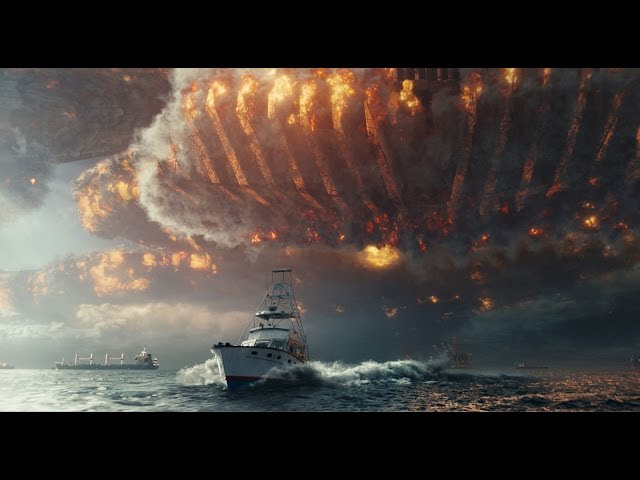 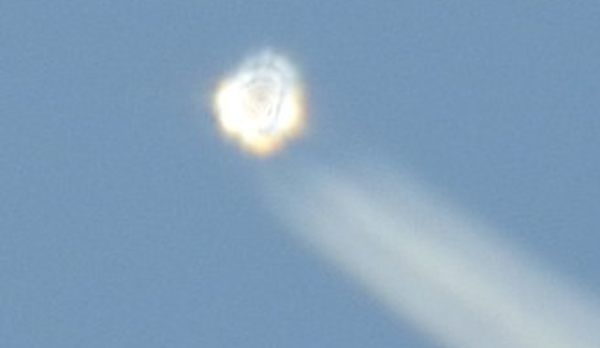 Above is original, below is added darkness to make the UFO stand out. 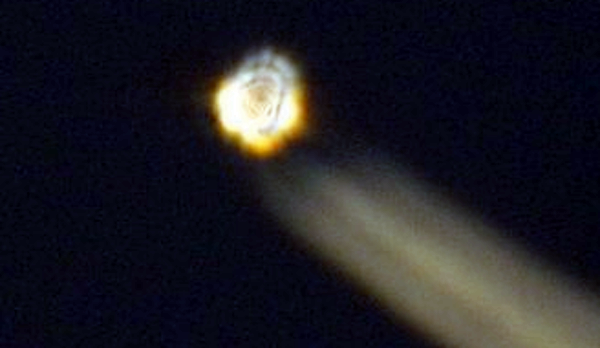 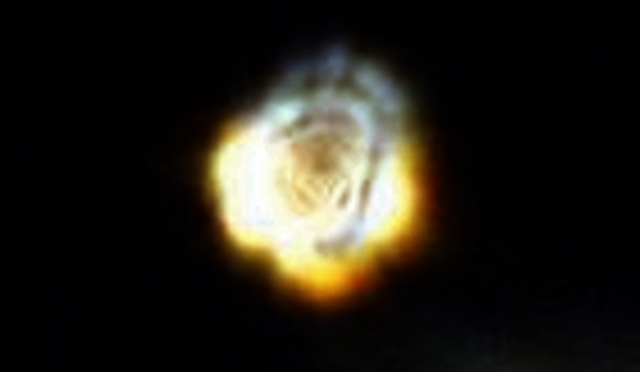 UFOs do make trails behind them sometimes, but they do it on purpose. UFOs make cloud tunnels for others to follow safely inside without being seen, but here its trying to look like a jet. Such antics by aliens works more often than not, so its difficult to laugh at them when the majority of the world is still in the dark about the existence aliens. When looking at the UFO, you see its bottom is in the shape of an alien face, the face of the species flying it.

This sighting is right next to the English Channel where only a few km away is Guernsey...an island where two planes recorded several yellow mile long disks over the ocean...an area of French military airspace, which shows the French have allotted a area of ocean to the aliens.
Scott C. Waring

News states:
A PROFESSIONAL UFO spotter has captured pictures of his first UFO of 2017. John Mooner, from Newton Abbot, who calls himself the chief photographer for World UFO Photos, snapped the strange object when he was 'sky watching' on Monday at around 1.30pm.

Mr Mooner said: "I decided to go out sky watching and I had my trusty Nikon P900 camera at the ready. "After about an hour of sky watching I spotted a faint contrail and began to zoom in. "At a higher magnification I could clearly see that this contrail was not coming from a plane, but was in fact coming from a round object that appeared to be glowing. "The round glowing object was at a very high altitude and I doubt that many people would be able to see this without a telephoto lens or a pair of high zoom binoculars. "The object was moving at a high rate of speed across the sky and I had real trouble stabilizing it in the camera's viewfinder. "I began taking photographs of this strange object and I managed to take six photographs that show the movement of this object."
Mr Mooner, who call himself the chief photographer for World UFO Photos, said it was a good start to the year for UFO spotters. "This is my first UFO photographs of 2017 and I can't wait to photograph more UFOs over Devon," he added. 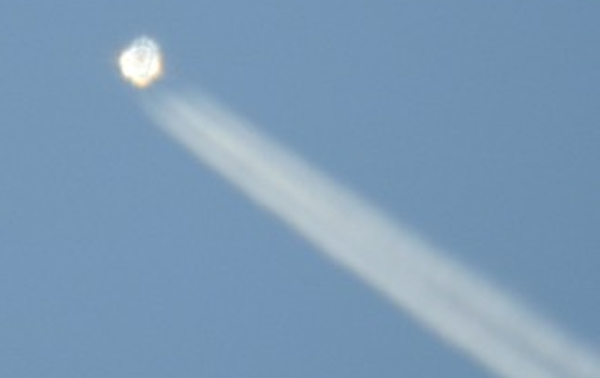 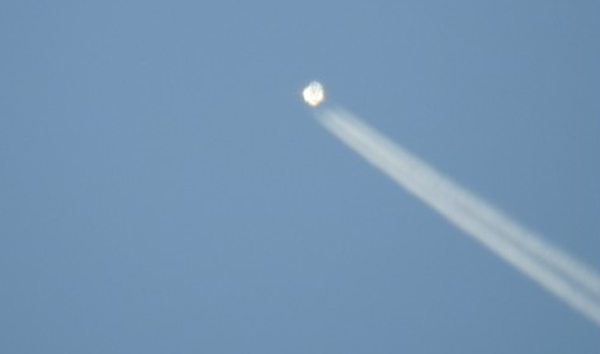 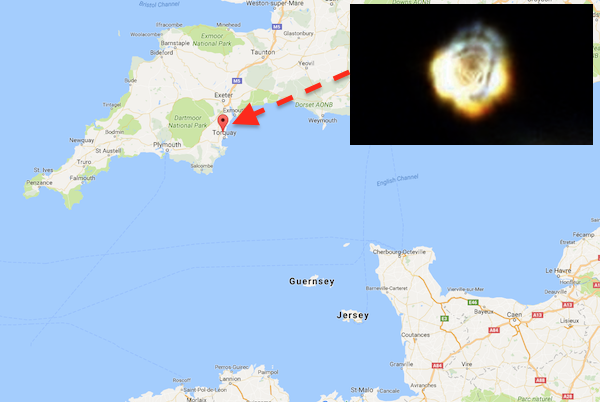 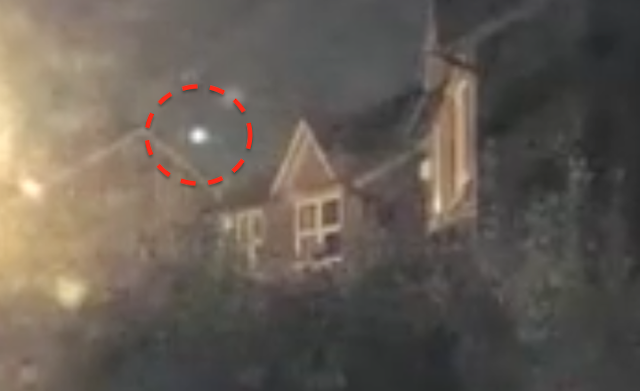 This UFO would be mistaken by many to be a meteor, but it has no tail and is moving very slowly at a horizontal position. The object is bright and not too far above the city. Caught by a home security camera, the UFO would have normal gone unnoticed, but cams are becoming the essential tools that will bring about disclosure.
Scott C. Waring

Eyewitness states:
We were actually on holiday away from home when we caught this ufo on our surveillance camera at home. We noticed the following morning that we had captured something strange. We cannot find anyone else at this moment in time who saw it too but to record it on video I think is very lucky. On the video it has recorded the date and time. On the video after our security light comes on and then goes off a few seconds later, above the neighbours houses but further away a light appears to the centre of the screen. This light seems to have a trail after it. We thought we were watching a meteor at first but realising it was quite big and not straight up in the sky, it would have to be pretty close to the earth if it was. Also, the light changes direction, it actually turns around and comes a little closer as it goes back to the same direction it came from. The light comes into view in the centre of the screen and moves left, when it turns around it slightly disappears behind a tree but can still be seen. When it comes back it seems to come closer and moves off to the right and in the same direction it came from. I feel as it was moving over some water to the outskirts of our village.