Odanah, WI — In a spectacular act of resistance to Big Oil, the Bad River Band of Lake Superior Tribe of Chippewa Council refused to renew a right-of-way easement for an Enbridge crude oil pipeline running through the Bad River Reservation.
While Standing Rock Sioux Tribe members remain entrenched in a battle to stop the Dakota Access Pipeline, the Bad River tribal council passed a formal resolution against renewing rights-of-way for Enbridge’s Energy Line 5 — and officially called for the pipeline to be decommissioned and removed from all tribal lands and the affected watershed.
Originally known as Lakehead Pipeline Company, Enbridge installed the pipeline in 1953; however, by 2013 — when “15 Individual grant of easement rights of way for Line 5 expired” — Band River had reacquired interests in eleven of those parcels.
“As many other communities have experienced, even a minor spill could prove to be disastrous for our people,” Bad River Tribal Chairman Robert Blanchard noted on the remarkable decision in the press release. “We depend upon everything that the creator put here before us to live mino-bimaadiziwin, a good and healthy life.”

Blanchard explained the resolution had not been motivated solely by the Band’s concerns — rather, the well being of the region, as a whole — all inhabitants as well as the living environment.
“We will work with our native and non-native communities to make sure that Line 5 does not threaten rights of people living in our region, and we will reach out to federal, state and local officials to evaluate how to remove Line 5, and we will work with the same communities and officials to continue developing a sustainable economy that doesn’t marginalize indigenous people,” Blanchard stated.
Not wasting any time, the Band has already begun planning for Line 5’s disassembly and removal, taking into account the handling of hazardous materials and remnants of toxic crude. Disposal of the pipeline parts, recycling and disposal of hazardous contents, and restoration of the land to as pristine a state as possible — with minimal impact on the ecosystem — are now of primary concern.
“These environmental threats not only threaten our health, but they threaten our very way of life as Anishinaabe,” Tribal Council Member Dylan Jennings asserted. “We all need to be thinking of our future generations and what we leave behind for them.”
Where the Bad River Band holds a distinct advantage compared to the Standing Rock Sioux in its fight to protect the water and land perhaps most concerns the location of the pipeline.
Energy Transfer Partners plans for the Dakota Access Pipeline directly threaten the water supply of the Standing Rock Reservation — but the pipeline’s path under the Missouri River’s Lake Oahe reservoir lies just north of government-declared tribal lands.
This means the majority of project in the area traverses private property, which ETP can pay owners for the right-of-way — usually paltry sums forcing them into court battles over valuation — or, as it has done in many places, performed gymnastics to employ the U.S. government’s controversial land-grab policy of eminent domain.
While the Enbridge pipeline obviously already sits on Bad River Band property — making the comparison a bit of apples and oranges — the fact it runs through reservation lands provides the members of the sovereign nation greater muscle in such decisions.
image: http://pixel.watch/qut7

Take a Peek Into the History Books

Public Domain
1994
Nancy Kerrigan is clubbed on the knee at the U.S. Figure Skating Championships in Detroit, Michigan.
In response to the 1973 oil crisis, daylight saving time commences nearly four months early in the United States.
As the statement explains:
“With over 7,000 members, the Bad River Band of Lake Superior Tribe of Chippewa Indians is located on an over 124,000-acre reservation in an area within Ashland and Iron Counties on the south shore of Lake Superior (known by the tribe as Gichi Gami). The Ojibwe people have a long and rich heritage throughout the Great Lakes region and at Odanah on Lake Superior prior to European traders, missionaries and settlers and continuing to today. Treaties signed by eleven Ojibwe Tribes ceded territory in the region, including what is currently the upper one third of the State of Wisconsin.”
As this resolution just passed in the later hours on Thursday, a response from Enbridge had not yet been released.
Standing up to Big Oil — thanks to opposition in Standing Rock — has become a national and international movement to begin the necessary move toward renewable forms of energy production.
Constant spills, leaks, and explosions — many with disastrous consequences — go mostly unnoticed in headlines simply for their frequency.
For the Bad River Band of Lake Superior Tribe of Chippewa council to sound a collective halt to Big Oil’s dominance of their land is an admirable — if quiet — act of resistance, indeed. 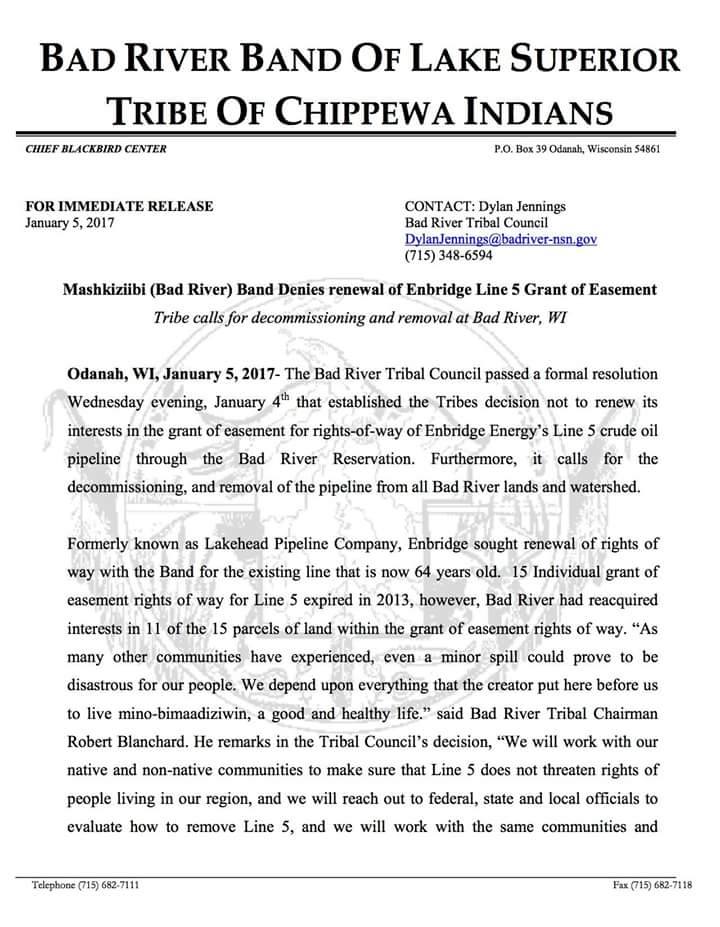 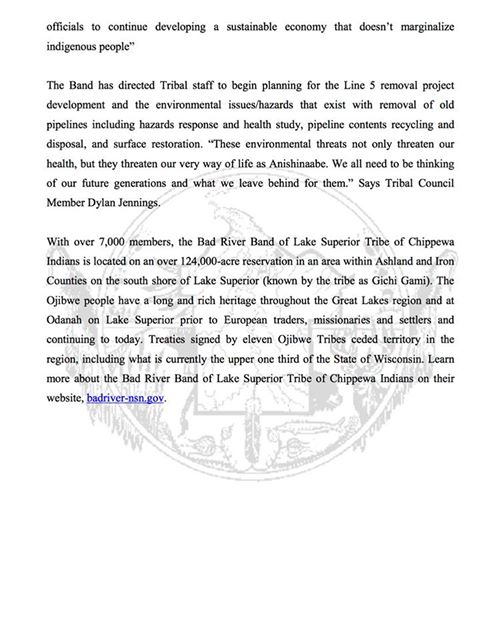 Thanks to Claire at: http://thefreethoughtproject.com