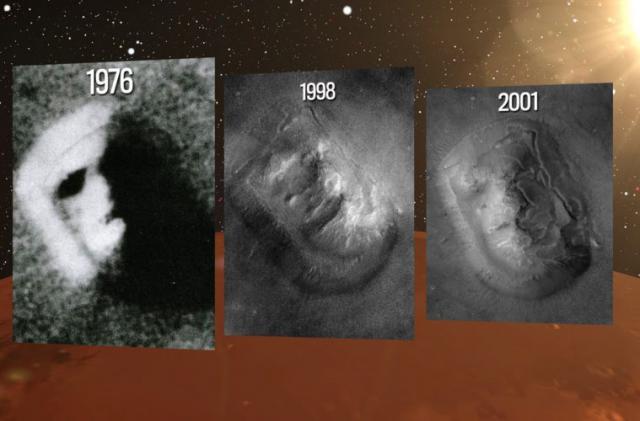 Proof that the discovery about pyramid and faces on Mars made in 1976 are real.
HOW AND WHEN WAS IT DISCOVERED
In the past, more precisely in 1976, the United States sent space probes famously known as “Viking 1” and “Viking 2” to Mars. The first one was sent on August 20th, 1975 while the second one was launched a month after. They both took photos of Mars while orbiting around the surface and when landed on the planet itself. On some photos they took, they saw a faced shape structure that would have about two miles from end to end. They also took a photo which a pyramid shape structure can be seen.
DID NASA KNOW?
One can almost believe that NASA would have known about those. Some ex-worker at the Nasa corroborate that sometimes, NASA can lie and hide things from the public eyes. They hide things until they think that the public is ready to face some “hard to believe” facts.
FAMOUS SCIENTISTS AND DOCTORS THAT SPOKE ABOUT THOSE PHOTOS
Dr. John Brandenburg has invented the “Microwave Electro-Thermal plasma thruster” that able the space propulsion using water. He is a very well known and famous scientific in that area of work. He has worked on some high-end security clearance project for the government. He works alongside Nada on some projects. He is a current employee of Morningstar Applied Physics. He basically said that the fact we see in those pictures is the proof that Mars used to be an earth-like planet. That NASA is being put up to those facts, and they have no other choice but to reveal the truth.
Dr. Brain O’Leary was an astronaut and was selected by Nasa in 1967. He was also a teacher at the University of California Berkeley, Hampshire College and also Princeton University. He basically said that NASA covered their tracks by hiding some data and then tried to explain that the face was just a natural formation and not anything else. He stated that Carl was colluding with NASA and they must have had some other information not currently known to public about those structures found on Mars. He said that they must have proofs and data that would be a “shock” to the world and to the common people. That’s the only reason he thinks they are covering up stories.
Dr. Norman Burgrun is an engineer and worked for NACA and Lockheed Missiles and Space Company. He said that NASA is erasing, modifying and inventing data to corroborate stories they make. Those data also includes the “faces on Mars.”
WHAT IS THE IMPACT ON OUR LIVES
In 2016, we come to realize that the truth is being hidden. Some agency, for some unknown reasons, try to hide facts about another life form to the public. A lot of witnesses have made themselves hear in the last years, but it’s hard to know the difference between a real witness from a fake one that only wants publicity or fame. It has been made public that some agency keeps information secret. We only have to wonder why.
If you wish to view the full lecture: