OUT OF MIND » VOICES CARRY » AMAZING PEOPLE, PLACES & THINGS » Activists are giving the middle finger to the law by continuing to feed homeless people

Activists are giving the middle finger to the law by continuing to feed homeless people Wed Jan 18, 2017 12:41 am 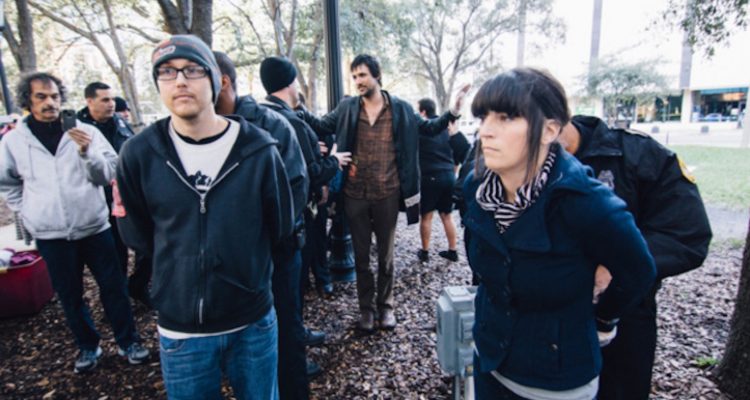 BY: SAMANTHA TAPP
Photos via CL Tampa / Anthony Martino.
I think we can all generally agree that giving back to those who have less than you is considered a good deed. Whether it be in the form of a monetary donation, some clothes, or food, helping the less fortunate brightens both of your days. That is, of course, unless you’re donating food to homeless people in your city and you get arrested.
On Saturday, January 7, activists in Tampa, Florida, were doing their usual duty of delivering free food in a public park to homeless people. The activists, a part of the group ‘Food Not Bombs,’ routinely hands out free vegan and vegetarian meals in protest of war and poverty. This past weekend the group was in Lykes Gaslight Park offering their help in the form of hot coffee and bagels when authorities intervened. Despite the lack of any obvious illegal actions, the Tampa police ended up arresting seven of the activists.
Why? In Tampa you have to have a special permit to be able to hand out free food to homeless people in public parks. The permit is not only expensive and only allows the group to hand out food twice a week in parks, but the city also requires groups to buy an insurance policy, which is also expensive.
So, what the hell happened? Earlier in the week, police had warned activists of their illegal behaviour, and the group decided to ignore them (police-0, humanity-1). When the cops showed up to the scene, which in a dream world would be a happy one, they gave the group three minutes to move out. The group refused of course, and seven of the activists who continued to serve food were arrested. According to True Activist, even a homeless man who reached for a bagel after the cops arrived was arrested. 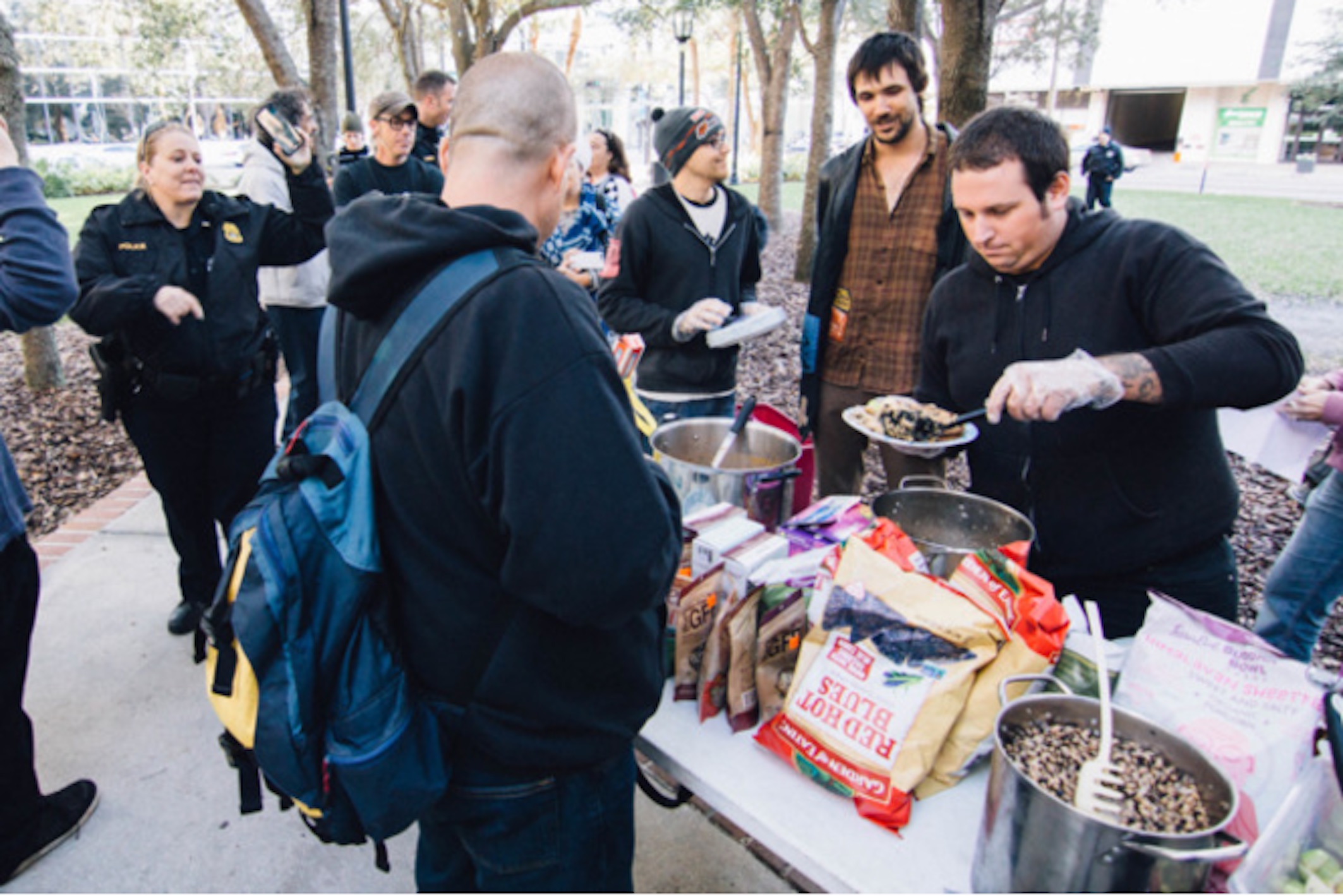 The activists were given trespass warnings and told not to return to the park for one year. This basically had no effect on the group, as even after the arrest, the group was unfazed and said they would still return to the park the next week to serve food.
“We intend to expose the city’s cruelty in the face of thousands in our community who are struggling with issues of food insecurity, mental and medical issues, poverty, and homelessness,” a Food Not Bombs spokesperson told McClatchy.
The group has been serving food in the park twice a week for four years, and say that there is only enforcement now because of the College Football Playoff National Championship taking place in Tampa. They state that the police are only now stepping in to get homeless people out of view when the tourists are in town. However, the cops obviously say they are just enforcing the law. 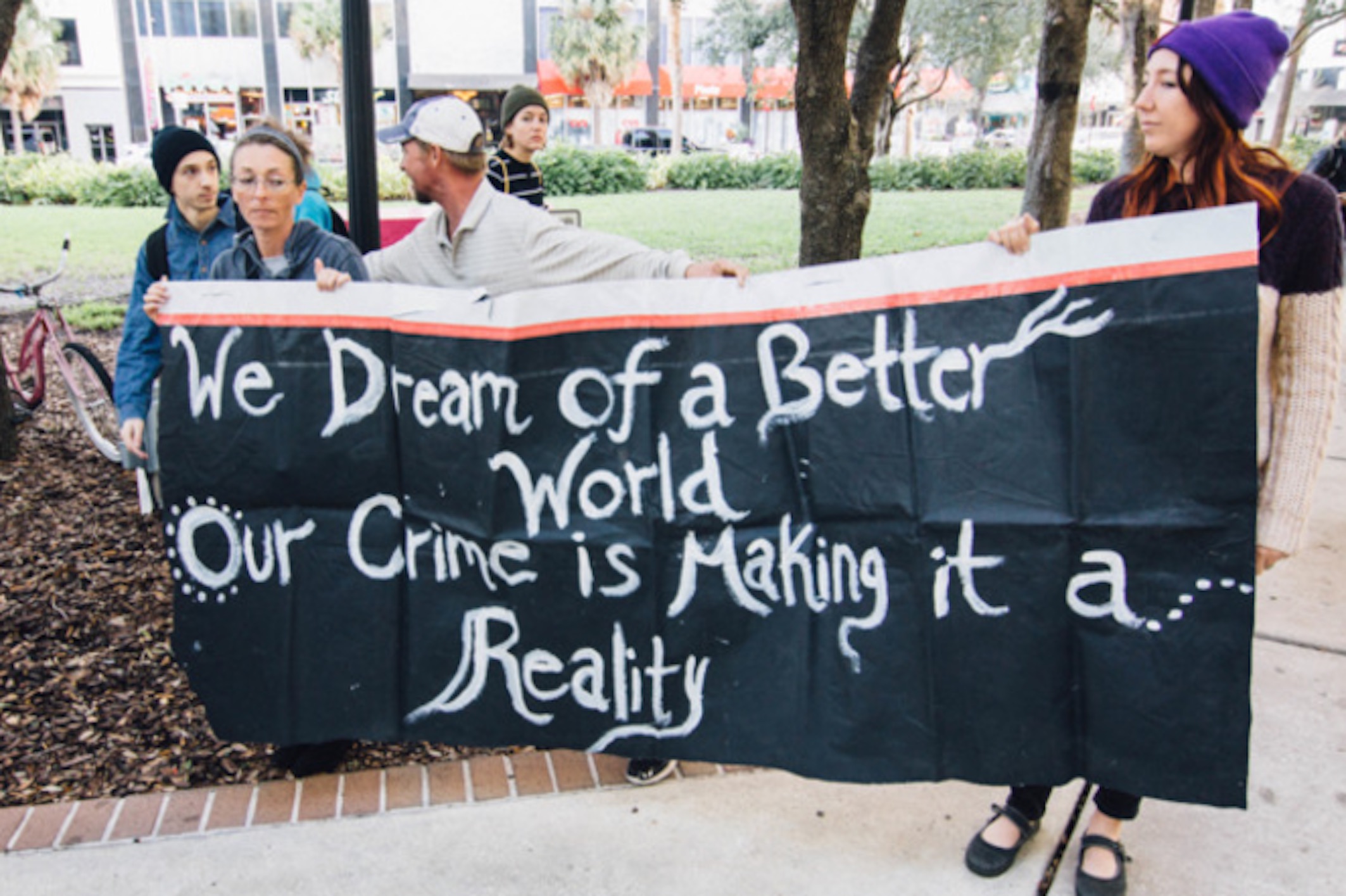 “The City of Tampa hasn’t enforced this ordinance over past years and over 300 Tampa Food Not Bombs food shares until a major sporting event and music celebrities brought tens of thousands of tourists to the Tampa area the past 2 weeks. (Along with the prospect of up to 300 million in profit),” the organization said.
While you may agree or disagree with the activists, the main point of this story isn’t the cops shutting them down, but that the group refuses to be shut down.
“Sharing food with the hungry is an unregulated act of compassion,” the group says on their site. “Resist all laws restricting the sharing of food with the hungry.”
Touché.

Re: Activists are giving the middle finger to the law by continuing to feed homeless people Wed Jan 18, 2017 11:08 pm

Bravo!  This is exactly what is needed!  The problem is the system!  Plus corrupt cops who get paid to prevent people with no money from getting food, what if they were the ones on the other end of the situation?  Greed!

These people are an example of overcoming the problem and making a difference in the positive direction!!

OUT OF MIND » VOICES CARRY » AMAZING PEOPLE, PLACES & THINGS » Activists are giving the middle finger to the law by continuing to feed homeless people