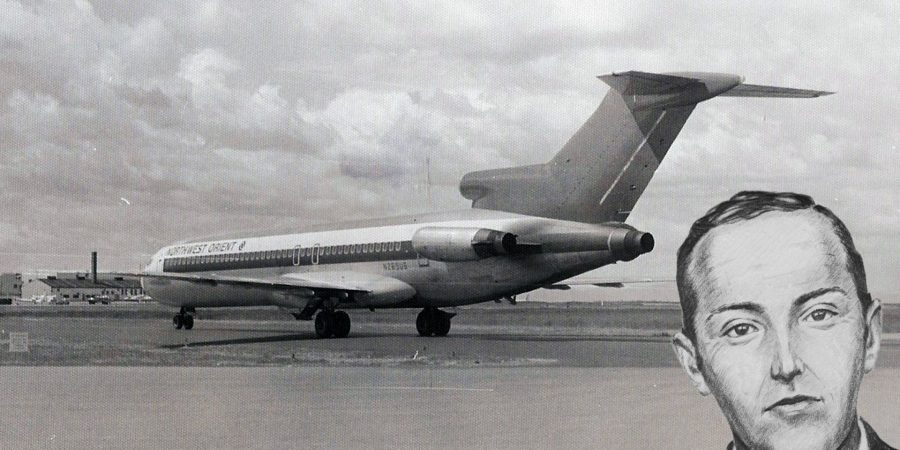 For anyone who may not be familiar with this case don’t worry the article gives a short catch up on the event further on.
A group of amateur scientists claim they may have narrowed the suspect pool in a case that has stymied the experts for decades.
The infamous case of D.B. Cooper and the nation’s only unsolved skyjacking has left investigators befuddled since a parachuted Cooper leapt from a Boeing 727 headed to Seattle from Portland on Nov. 24, 1971.
But a team of “Citizen Sleuths” say that evidence they’ve uncovered could mean that Dan Cooper, the name used when the culprit bought his one-way ticket with cash, was in fact an employee of some sort of aerospace engineering firm.
The crucial pieces of newly uncovered evidence: thousands of microscopic particles on a $3 clip-on necktie from JC Penney.
“All of these particles are too small to be seen with the naked eye, but modern science can now track them to their source,” the group wrote on their website. “These particles through their shape and composition can tell a story.”
If you are one of the few who are unfamiliar with the saga of D.B. Cooper, here’s the short version:
On that fateful day in 1971, a man calling himself Dan Cooper purchased a one-way ticket from Portland to Seattle on Northwest Orient Airlines. He hijacked the plane, demanded $200,000 in ransom money, and having received it during a stopover in Seattle, jumped from the aircraft wearing nothing but a business suit and a parachute somewhere over the forests of southwest Washington.
He wasn’t wearing a full suit, the amateur investigators claim. A clip-on tie remained on seat 18E, where Cooper was seated.
“Of all the possible things for him to leave on the plane, the tie was incredibly fortunate for this investigation,” the Citizen Sleuths wrote.
Namely because a necktie is one of the few articles of clothing that rarely, if ever, gets washed. The accumulation of particles can paint a picture of where the tie has been and the person who was wearing it.
“Each of those particles comes from something and somewhere and can tell a story if the proper instruments like electron microscopes are used,” the group wrote.
The particles in question — Cerium, Strontium sulfide and pure titanium — are of note because because of how rare they are, lead investigator Tom Kaye told King 5 News in Seattle.

“A lot of people think ‘You’ll never catch the guy,’ but this is the closest we’ve been in a long time.”

“These are what they call rare earth elements. They’re used in very narrow fields, for very specific things,” he said.
Of particular interest was the pure titanium. The mineral was widely used in aircraft manufacturing in the early 1970s, but titanium used in airplanes was almost always mixed with other metals, which ruled out Boeing, the region’s largest aerospace manufacturer.
Beyond that, metalworkers rarely wear ties to work, so Cooper would’ve had to have been a manager or an engineer.
Given the other particles present, Kaye said the tie was likely in a plant that manufactured cathode ray tubes, which are vacuum tubes often used in televisions, computers and radar screens.

A look at the tie under blacklight. The circles represent areas where particles were taken from the tie.
Courtesy/Citizen Sleuths
The advanced analysis of the particles was made possible after the Travel Channel’s “Expedition Unknown” show became interested in the group’s work. The show funded a more in-depth examination by McCrone Associates, which specializes in particle analysis and lead Kaye and his team to identify a two firms in the Portland area that fit the bill — Teledyn and Tektronix.
Without the official capacity of the FBI, no one is quick to turn over personnel records, however.
That’s where Kaye is hoping the public will step in. Given the information his team has uncovered, he’s hoping that someone who worked in this type of manufacturing in the correct timeframe will come forward.
“We’ve narrowed down the field of potential Cooper suspects from millions of people in the United States to a very narrow group of people,” he said. “A lot of people think ‘You’ll never catch the guy,’ but this is the closest we’ve been in a long time.”
If you think you’ve got a lead on who the culprit might be, Kaye asked that you get in touch.
Kale Williams
The Oregonian/OregonLive