OUT OF MIND » THE INSANITY OF REALITY » GOVERNMENTS & THE NEW WORLD ORDER » The Minute Trump Took Office, All Reference to ‘Climate Change’ was Deleted Off White House Website

The Minute Trump Took Office, All Reference to ‘Climate Change’ was Deleted Off White House Website


Exactly one minute before President-elect Donald Trump took office, the official White House website, https://www.whitehouse.gov, had a lengthy information page on climate change and the steps federal government had planned to address it. Exactly one minute after that, when Trump took office — it was gone.
According to VICE, it’s customary for www.whitehouse.gov to flip over to the new administration exactly at noon, but the only mention of climate on President Trump’s new website is under his “America First Energy Plan” page, in which he vows to destroy President Obama’s Climate Action Plan, which is a government-wide plan to reduce carbon emissions and address climate change. To reiterate: It is normal that the site is completely new; it is notable that climate change is not mentioned on any one of Trump’s new pages.
Just before Trump took office, here’s what the climate change page looked like on whitehouse.gov:
image: http://thefreethoughtproject.com/wp-content/uploads/2017/01/1484933328844565.png 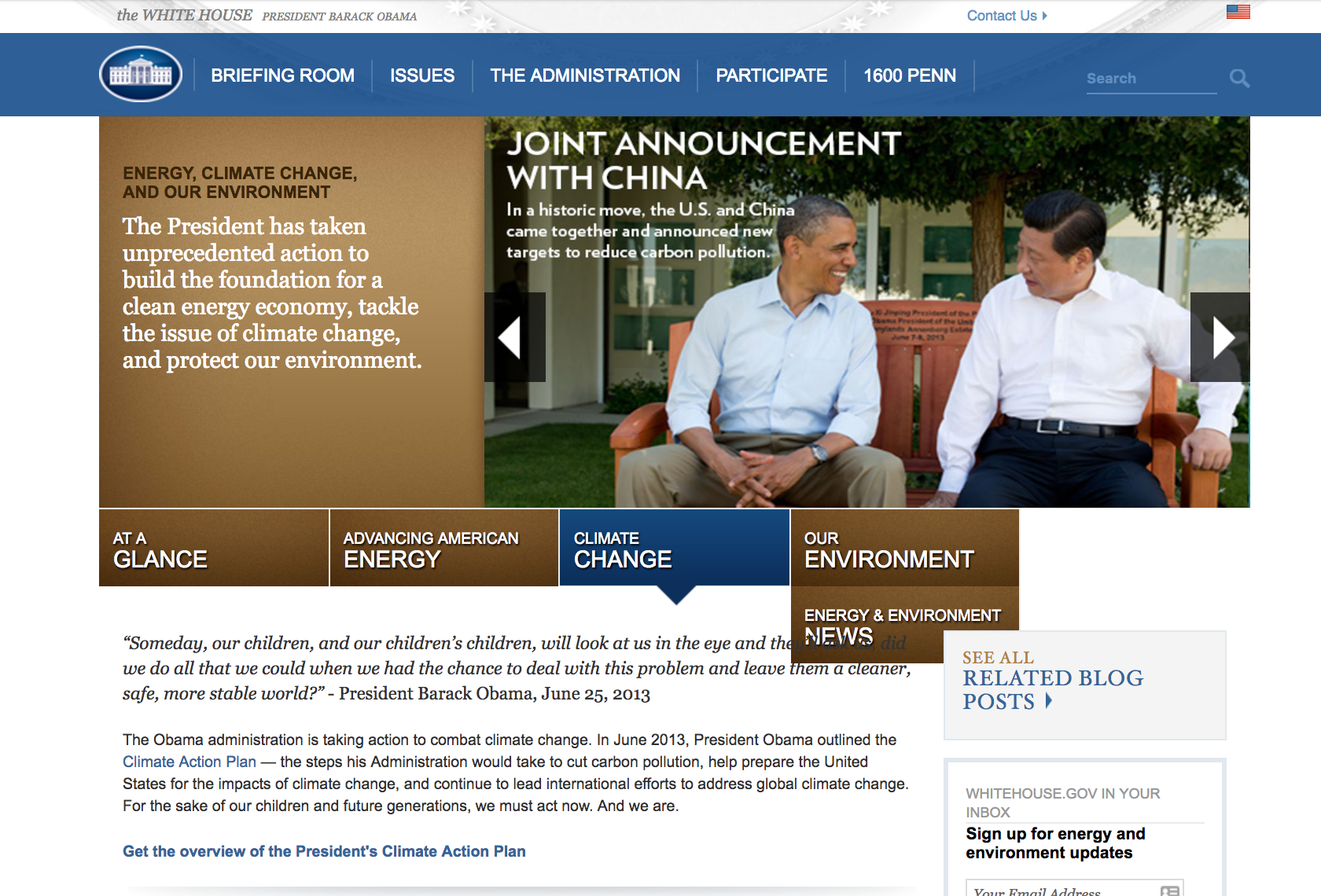 As the Free Thought Project previously reported, contrary to claims of shunning the establishment and embracing the working class, he is surrounding himself with billionaires eager to put exploitation into high gear.


His promises to “drain the swamp” are ringing hollow as yet another Wall St. megabank figure will be directing his administration. Goldman Sachs executive Gary Cohn was named head of Trump’s National Economic Council, even though Trump rightly pointed out during campaigning that Goldman Sachs is part of a “global power structure” sucking wealth from the middle class.
But Wall St. predators are not the only special interests Trump is bringing in. His energy advisers are almost exclusively fossil fuel lobbyists and tycoons such as Harold Hamm, and these billionaires are helping him find the most subservient bureaucrats to fill positions related to energy.

READ MORE:  Actor James Cromwell on DAPL -- The Police are 'Thugs' Being Shielded By Corporate Media

It is important to note that the Free Thought Project is not advocating for the existence or the non-existence of climate change — we are not climate scientists. However, we most certainly think that it is a topic worthy of discussion and research.
Of course, drastic government mandates and sweeping bans on items is no way to handle any situation. However, that is becoming more and more unnecessary given the market’s reaction to fossil fuels and their alleged potential to contribute to global warming
The U.S. Dept. of Energy’s second annual report found that, in 2016, solar employment was almost double that of fossil fuel employment in the Electric Power Generation sector.

OUT OF MIND » THE INSANITY OF REALITY » GOVERNMENTS & THE NEW WORLD ORDER » The Minute Trump Took Office, All Reference to ‘Climate Change’ was Deleted Off White House Website