The Magnificent Colossi of Memnon

The Colossi of Memnon, aka El-Colossat, es-Salamat, are two MASSIVE stone statues of Pharaoh Amenhotep III, who reigned during Dynasty XVIII. The statues are made of blocks of quartzite sandstone which were quarried at El-Gabal el-Ahmar and transported –incredibly— 675 km to their current position, in the Theban necropolis.

The statues, however, have nothing to do with Memnon, technically. Memnon, who was a hero of the Trojan War, the King of Ethiopia was eventually slain by Achilles. Memnon was only associated with the colossi because of the reported cry at dawn of the northern statue which became known as the Colossus of Memnon.
In time. The Theban Necropolis became generally referred to as the Memnonium.
These imposing ancient Egyptian statues have remained in the Theban necropolis, west of the River Nile for the past 34400 years, since 1350 B.C.
Two gigantic 18-meter-tall twin statues depict Pharaoh Amenhotep III in a sedentary position facing East, the Nile and the sunrise.

The statues were made of blocks of quartzite sandstone which were quarried at El-Gabal el-Ahmar and transported –incredibly— 675 km overland to Thebes. The blocks were apparently too heavy to be transported upstream on the River Nile.
The purpose of the statues was to guard the entrance to Amenhotep’s memorial temple (or mortuary temple): a massive cult center built during the pharaoh’s lifetime, where he was worshiped as a god-on-earth both before and after his departure from this world. 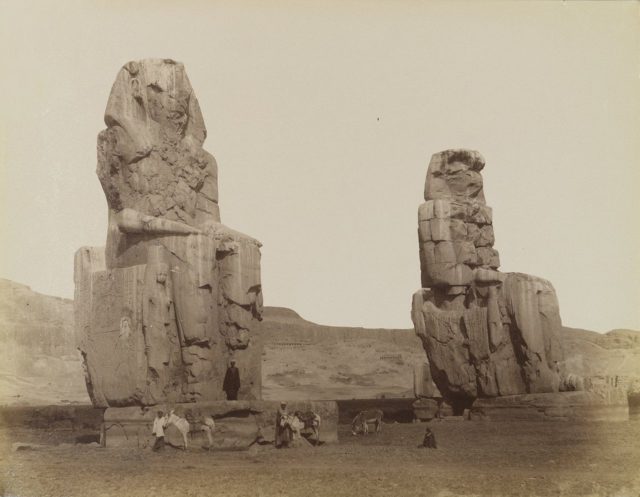 It seems that in origin both were exactly alike, but today they are not, as a result of a restoration undertaken in Roman times.
In 27 BC. An earthquake toppled much of the northern colossus.
From then on, the bottom that remained standing began to ‘sing’ every morning at sunrise. That curious fact was recorded by historians Strabo and Pausanias.

The first stated that the sound was very much like a blow, while the second compares it to that of the string of a lyre when it breaks.
Strabo is the one who gives us the first mention of the fact in historical literature, also assuring to have been witness to the phenomenon during his visit in around 20BC.
As it turns out, the legend spread virally that even several Roman emperors wanted to see and hear it for themselves.
The last reliable mention of the sounds dates from the year 196 A.D. The Roman reconstruction that took place around 199 AD seems to have ‘fixed’ the phenomenon after which the sounds were no longer present.
Emperor Septimius Severus, who visited the Colossi of Memnon, was not able to hear the sounds.
Two types of explanations for the ‘sounds of the statue have been pointed out.
Strabo suggested that he had not been able to determine its origin, whether it came from the pedestal or was produced by people walking at the base.
These two theories, the natural and the one saying it was produced by man, have never been proven.
If it was a natural phenomenon, it was probably produced by changes in temperature and the evaporation of water which, when passing through the fissures, produced the sound.
And if it was produced by man, it is not explained why the sounds ceased after the Roman reconstruction. During the eighteenth and nineteenth centuries, there have been some reports of travelers who claimed to have heard the sound, but none of the reports were fully convincing.

Featured image: The twin statues depict Amenhotep III (fl. 14th century BC) in a seated position, Both statues are quite damaged, with the features above the waist virtually unrecognizable. Source