Thanks to a breakthrough by a research team led by University of California Berkeley physicist Norman Yao, time crystals are now a reality. 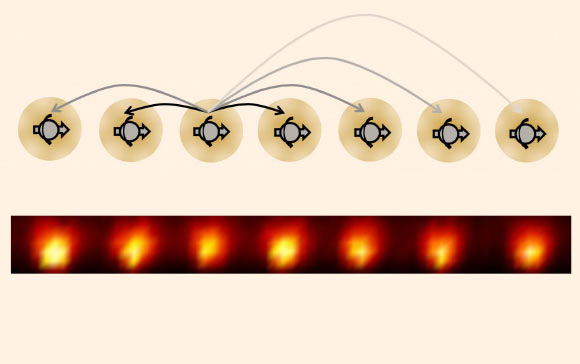 Following a blueprint created by N.Y. Yao et al, University of Maryland physicists made the first time crystal using a one-dimensional chain of ytterbium ions; each ion behaves like an electron spin and exhibits long-range interactions indicated by the arrows. Image credit: J. Zhang et al.
If crystals have an atomic structure that repeats in space, like the carbon lattice of a diamond, why can’t crystals also have a structure that repeats in time? That is, a time crystal?
In a paper published in the journal Physical Review Letters, Dr. Yao and co-authors describe how to make and measure the properties of a time crystal, and even predict what the various phases surrounding the time crystal should be.
This is not mere speculation. Two groups at the University of Maryland and Harvard University followed the Berkeley team’s blueprint and have already created the first-ever time crystals. The researchers reported their success in papers (paper #1 and paper #2) posted recently at arXiv.org.
“Time crystals repeat in time because they are kicked periodically, sort of like tapping Jell-O repeatedly to get it to jiggle,” Dr. Yao said.
“The big breakthrough is less that these particular crystals repeat in time than that they are the first of a large class of new materials that are intrinsically out of equilibrium, unable to settle down to the motionless equilibrium of, for example, a diamond or ruby.”
“This is a new phase of matter, period, but it is also really cool because it is one of the first examples of non-equilibrium matter.”
“For the last half-century, we have been exploring equilibrium matter, like metals and insulators. We are just now starting to explore a whole new landscape of non-equilibrium matter.”
While Dr. Yao is hard put to imagine a use for a time crystal, other proposed phases of non-equilibrium matter theoretically hold promise as nearly perfect memories and may be useful in quantum computers. 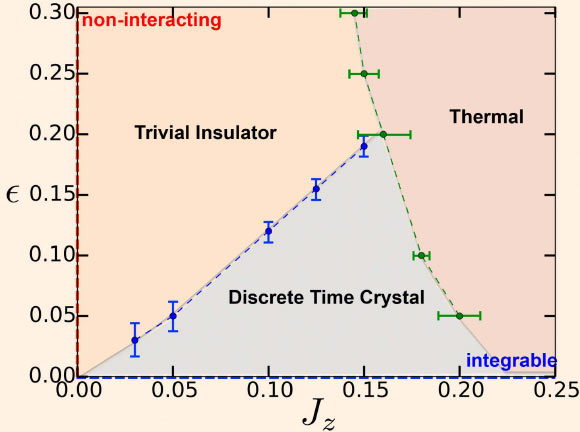 This phase diagram shows how changing the experimental parameters can ‘melt’ a time crystal into a normal insulator or heat up a time crystal to a high temperature thermal state. Image credit: N.Y. Yao et al.
Time crystals were originally theorized by Nobel laureate Frank Wilczek in 2012.
In 2016, theoretical physicists at Princeton University and the University of California Santa Barbara independently proved that such a crystal could be made.
According to Dr. Yao, his team was “the bridge between the theoretical idea and the experimental implementation.”
“From the perspective of quantum mechanics, electrons can form crystals that do not match the underlying spatial translation symmetry of the orderly, 3D array of atoms,” he said.
“This breaks the symmetry of the material and leads to unique and stable properties we define as a crystal.”
The Harvard team set up its time crystal using densely packed nitrogen vacancy centers in diamonds.
The time crystal created by the Maryland team employs a conga line of 10 ytterbium ions whose electron spins interact, similar to the qubit systems being tested as quantum computers.
To keep the ions out of equilibrium, the physicists alternately hit them with one laser to create an effective magnetic field and a second laser to partially flip the spins of the atoms, repeating the sequence many times.
Because the spins interacted, the atoms settled into a stable, repetitive pattern of spin flipping that defines a crystal.
A time crystal breaks time symmetry. In this particular case, the magnetic field and laser periodically driving the ytterbium atoms produce a repetition in the system at twice the period of the drivers, something that would not occur in a normal system.
“Wouldn’t it be super weird if you jiggled the Jell-O and found that somehow it responded at a different period?” Dr. Yao said.
“But that is the essence of the time crystal. You have some periodic driver that has a period ‘T’, but the system somehow synchronizes so that you observe the system oscillating with a period that is larger than ‘T’.”
Dr. Yao worked closely with the Maryland physicists as they made the new material, helping them focus on the important properties to measure to confirm that the material was in fact a stable or rigid time crystal.
He also described how the time crystal would change phase, like an ice cube melting, under different magnetic fields and laser pulsing.
_____
N.Y. Yao et al. 2017. Discrete Time Crystals: Rigidity, Criticality, and Realizations. Phys. Rev. Lett. 118 (3): 030401; doi: 10.1103/PhysRevLett.118.030401
J. Zhang et al. 2016. Observation of a Discrete Time Crystal. arXiv: 1609.08684
Soonwon Choi et al. 2016. Observation of discrete time-crystalline order in a disordered dipolar many-body system. arXiv: 1610.08057