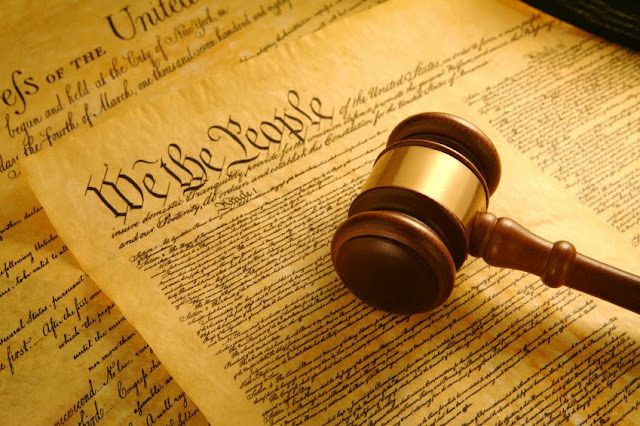 First they said he could never win the republican nomination.  Next they said that he could never actually win the election.  Then they said he wouldn't really steal health care from 20 million Americans, that he would back down from the wall and the Muslim ban.  After just 12 days in office Trump has proven all of "them" wrong as he continues to wreck havoc with every decree and proclamation.

We have already seen that Trump creates his own desired reality, with him firmly at the center of his own world.  When we see what he has done, & promises to do next the old analogy of a bull in a china shop comes to mind.  Of course he has ordered his people to muddy the waters as much as possible as he continues to ignore protocols that have been in place for many decades.  So far I have only heard 2 people call this travesty what it really is; Bill Maher and Michael Moore who agree it is an American Coup D'etat.  At this point less than two weeks since his inauguration I am wondering to myself when we are going to start taking Trump at his word, and impeach him before he launches the nukes? 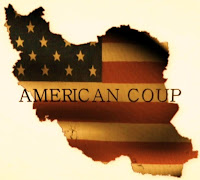 This of course is not the first American Coup D'etat, the last one was 54 years ago when they assassinated JFK because he wanted to smash the CIA.  They smashed first, and the rest is just revisionist history, like what Trump & his gang of thieves are currently doing, trying to push back then re-write history.  This time it's a slow moving  Coup D'etat because they learned a little from the last one. This time they put America on the slow boil; just like you cook a lobster, hoping nobody would notice until it was too late.

For any who may think the idea of Trump launching nukes is reactionary, you may not think so after hearing that Trump just put Iran "on notice" after they conducted a missile test last Sunday.  Then there is Putin's renewed military ops in Eastern Ukraine which may test Trump's Russia connection.  These are worrisome events on any day, perhaps even more so if you consider how eager Trump is to distract from his setting up a fascist regime in the peoples house.  A little war hawk action might be just the thing to rally folks around their leader; it worked for W!

Trump is a cancerous growth on the soul of America.  If we take action NOW by impeachment & imprisonment (treason) we may just give democracy the second chance it so desperately needs.  Leaving Trump in office heralds the absolute death of democracy and the installation of fascist Nazi tyranny.  Never forget that his first action as president was to attempt to silence all federal agencies, prohibiting them from speaking with either congress or the media; and then introducing the Orwellian concept of "alternative facts."  Those are not the acts of a president, they are the opening acts of a Trump dictatorship; and that simply cannot be allowed to fester further than it already has.

With virtually zero notice Trump ordered the immediate implementation of his Muslim ban & "extreme vetting" immigration policy.  The result was almost instantaneous pandemonium at airports around the country and overseas, as families were split apart and even those having green cards were detained as enemies of the state.  Meanwhile we are left to wonder why the ban did not include the countries which the 911 terrorists supposedly came from.  That simply makes no sense at all. 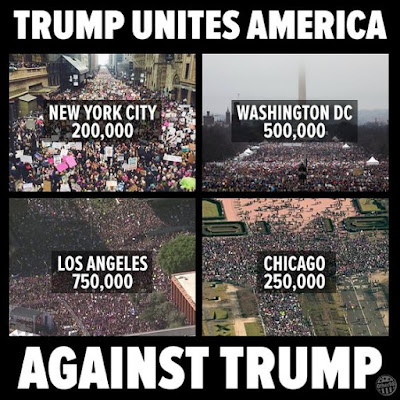 The Muslim ban has generated massive protests in many countries around the world, and in American airports the very surreal sight of Muslims kneeling in prayer and Americans reassuring them with support!  Trump was crying for a full week about how he wanted bigger crowds shouting his name; well now he has it.

It's not just we the people who are upset over the Muslim ban; Trump's state department is in dissent, which resulted in Trump telling acting Attorney General Sally Yates, "You're Fired."  More than 1000 state department employees are in open rebellion against the Trump administration, all of them signing a letter of dissent.

While airports around the country were clogged with the chaos Trump caused, and protesters were filling the streets of cities all over the world: he was holding a family screening of "Finding Dory" in the white house.  That kind of speaks for itself, and what it says is chilling indeed.  We are all currently experiencing reality at the rate of several WTF's a minute!

Veterans groups have publicly denounced Trump's Muslim ban, calling it "Flat out shameful and un-American."  Being a veteran myself I can tell you from first hand experience that Trump in the white house has seriously jump-started my own struggle with PTSD.  An awful lot of progress I thought I'd made has just been wiped away by this Nazi loving tyrant becoming president.  Hyper-vigilance has resurfaced after many years of being dormant.  My sleep cycle has been destroyed, and when I do manage to sleep, some of the old nightmares have returned; along with a whole rash of new ones with Trump's face on them.  If Trump isn't removed from office it's gonna be PTSD and not health care for everyone, and we'll all be living life one nightmare at a time.  I sure picked one hell of a time to quit smoking! 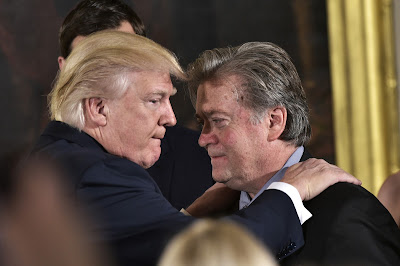 Trump has issued no fewer than 20 executive orders in his first 10 days on the job.  At this rate it should only take a few weeks to fully install the fourth Reich.  He also just gave his white supremacist chief advisor Steve Bannon a permanent seat on the security council; which is just an insult to democracy.  The democrats in congress have drafted a strongly worded letter of disapproval over installing a unqualified hack like Bannon, insisting that Trump reverse his decision immediately.

For crying out loud Bannon is just another internet troll like Trump.  Bannon does not deserve any level of security clearance and could most easily pass state secrets and info to our enemies, and the same goes for Trump.  Neither of these men have a shred of decency or integrity between them, and they both have to go, by any means necessary, and as soon a possible.

An equally huge insult is Trump's running the government like a reality TV show with the  supreme court appointment of Neil Gorsuch to replace late ultra conservative Antonin Scalia; advertised like a prime time special instead of a daytime press release.  Trump desperately needs the distraction from the Muslim ban mess he started but the Gorsuch confirmation hearings threaten to drag on towards historic lengths due to all the routine petty in-fighting in the capitol.  Democrats are considering this a stolen seat because of the republican ten month long filibuster which denied Merrick Garland, Obama's choice for the supreme court.  Business as usual, but with a newborn dictator in the oval office. 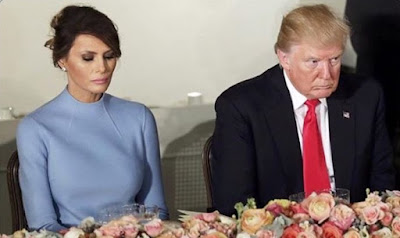 Another of those 20 decrees is the un-American and un-ethical, denying of funding to Sanctuary cities. San Francisco and several other cities are taking legal action and suing the Trump administration in court to keep the much needed funding in place.  What this man and his gang of plunder monkeys are doing is an abomination to all that this country was founded on.  What about the idea that America is the great melting pot, a crucible which makes us stronger by adding our skills to a common cause, a goal, yes, a dream.  Better yet what about those words displayed so proudly on the statue of liberty:

"Give me your tired, your poor, your huddled masses yearning to breathe free" 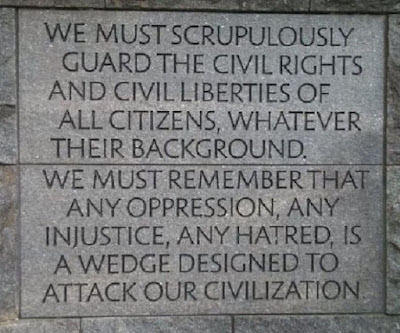 Both Microsoft and Amazon have joined a lawsuit to stop this illegal Muslim ban.  The Trump administration continues to fall back upon "alternative facts" with Trump & Spicer calling it a ban; at the same time others are saying it isn't a ban.  Their insistence that both "facts" are true would be hilarious if it wasn't playing out right in front of our eyes.  This level of malfeasance is nothing but intentional incompetence! We will very soon be at the point where civil suits against this administration will equal the number of official state proclamations.
We must never normalize this fascist, racist, misogynist  Trump.  NO!~ not ever.  We the people need to throw it right back in his face, impeach him, imprison him, and make him pay for it.  In his first 12 days he acts to repeal the Affordable Care Act, invokes an immigration freeze and illegal ban on Muslims, and orders the wall begun; then slaps a gag order on federal agencies barring them from speaking to the press.  Can a decree giving Trump control over the internet be far behind?  Not only does this delusional despot dream up his own reality on the fly, he seems very intent upon silencing all voices but his.  That ain't a democracy folks, it's a dictatorship.  Simple as that.

Posts : 2620
Join date : 2012-01-17
Age : 74
Location : NH
Talk about One sided, opinionated, half or partial truths... really?  Maybe it's just me but I see a different picture. I guess one of the biggest reasons I think this post is 'full of it', is the attack on the Immigration thing which is pure BS. If you read the actual EO, the text is almost a cookie cutter version of the Bush/Obummer EO(s) that started after 9/11. To me at least the Good News is that the extent the Previous PTB are going to discredit and disrupt Trump & Co. tells me things are changing and I see that as progress... certainly we cant tell at this point the exact direction of that progress but change is indeed what is needed. IMHO

Admin
Posts : 106882
Join date : 2012-01-04
Location : Woodstock Nation
Absolutely Marty. I loath Trumpalumpagus but he saved this country from the vile sub human whore of Babylon. The cost was the great divide. Insanity seems to rule right now.
A person I talk to often says that we will not see anymore "false flags" here re: the Muslim scapegoats. He seems to think that Canada will now be the host country for the sacrificial slaughter. And it already started immediately after Trudeau welcomed the refugees to his country. So yes... will be interesting to watch it all unfold there.