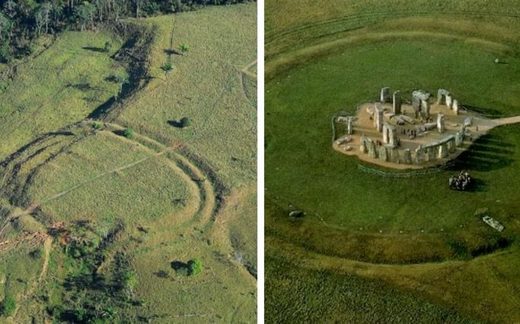 © Salman Kahn and Jose Iriarte
450 'henge' earthworks were found using drones in the Brazilian rainforest
Hundreds of ancient earthworks resembling those at Stonehenge were built in the Amazon rainforest, scientists have discovered after flying drones over the area.

The findings prove for the first time that prehistoric settlers in Brazil cleared large wooded areas to create huge enclosures meaning that the 'pristine' rainforest celebrated by ecologists is actually relatively new.

The ditched enclosures, in Acre state in the western Brazilian Amazon, have been concealed for centuries by trees, but modern deforestation has allowed 450 to emerge from the undergrowth. They were discovered after scientists from the UK and Brazil flew drones over last year.

The earthworks, known by archaeologists as 'geoglyphs' probably date from around the year zero.

The research was carried out by Jennifer Watling, post-doctoral researcher at the Museum of Archaeology and Ethnography, University of São Paulo, when she was studying for a PhD at the University of Exeter.

Although the function of the sites is unknown Dr Watling said they resembled Neolithic causewayed enlosures found at sites such as Stonehenge in Wiltshire, although they appear to be more regular. 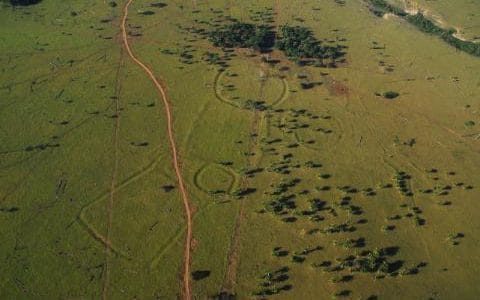 © Salman Kahn and Jose Iriarte
Both round and square enclosures were discovered by the drones, which probably were ritual sites.
"It is likely that the geoglyphs were used for similar functions to the Neolithic causewayed enclosures, i.e. public gathering, ritual sites," said Dr Watling. "It is interesting to note that the format of the geoglyphs, with an outer ditch and inner wall enclosure, are what classically describe henge sites. The earliest phases at Stonhenge consisted of a similarly layed-out enclosure."

Although Stonehenge is around 2,500 years older than the geoglyphs found in Brazil, they are likely to represent a similar period in social development.

The enclosures are unlikely to represent the border of villages, since archaeologists have recovered very few artefacts during excavation. It is thought they were used only sporadically, perhaps as ritual gathering places, as they have no defensive features such as post holes for fences.

Their discovery also reverses assumptions that the rainforest ecosystem has been untouched by humans. "The fact that these sites lay hidden for centuries beneath mature rainforest really challenges the idea that Amazonian forests are 'pristine ecosystems,'" added Dr Watling.

"Our evidence that Amazonian forests have been managed by indigenous peoples long before European contact should not be cited as justification for the destructive, unsustainable land-use practiced today.

"It should instead serve to highlight the ingenuity of past subsistence regimes that did not lead to forest degradation, and the importance of indigenous knowledge for finding more sustainable land-use alternatives". 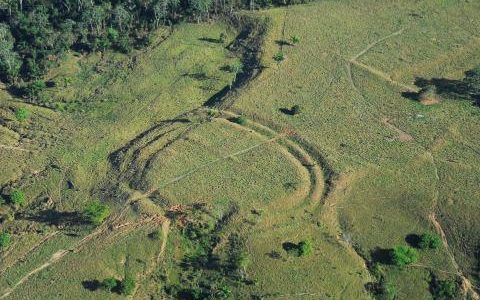 © Salman Kahn and Jose Iriarte
Some sites had multiple banks and ditches .
Using state-of-the-art methods, the team members were able to reconstruct 6000 years of vegetation and fire history around two enclosure sites.

They found that humans heavily altered bamboo forests for millennia and clearings were made to build the geoglyphs.

The research was published in the journal Proceedings of the National Academy of Sciences.