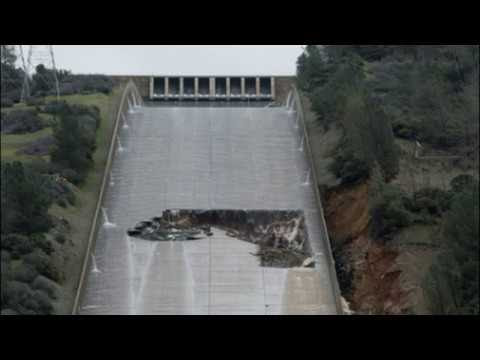 he Butte County Sheriff's Department shared this video of the Oroville Spillway Thursday. The sheriff's department says 35,000 cubic feet per second of water is currently being released over the spillway. Efforts are being made to release the needed amount of water to avoid use of the Emergency Spillway. It is expected for more erosion to occur on the spillway due to the water release.

Erosion has created a 30-foot-deep hole in the concrete spillway of Oroville Dam and state officials say it will continue to grow as officials balance the need to release pressure from the filling reservoir.
State engineers on Thursday cautiously released water from Lake Oroville's damaged spillway as the reservoir level climbed amid a soaking of rain.
"Efforts are being made to release the needed amount of water to avoid use of the Emergency Spillway. It is expected for more erosion to occur on the spillway due to the water release," the Butte County Sheriff's Office wrote in a Facebook post accompanied by video of 35,000 cubic feet per second being released from the damaged spillway. Much of that water appeared to be passing through the gash in the structure and pouring over the surrounding hillside.
Social media posts Thursday afternoon showed damage that appeared to stretch the width of the spillway.


Situated in the western foothills of the Sierra, Lake Oroville is the second-largest man-made reservoir in California after Shasta. It's a key flood-control and water-storage facility within the California State Water Project, and its fresh water releases control salinity intrusion into the Sacramento-San Joaquin Delta and protect the health of fish and wildlife. 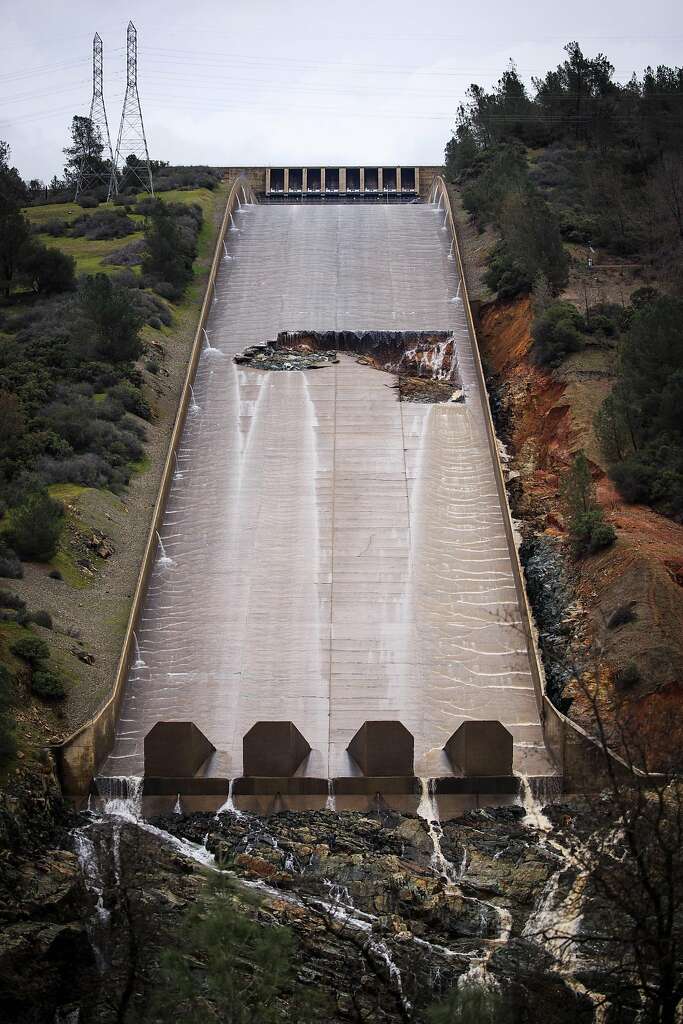 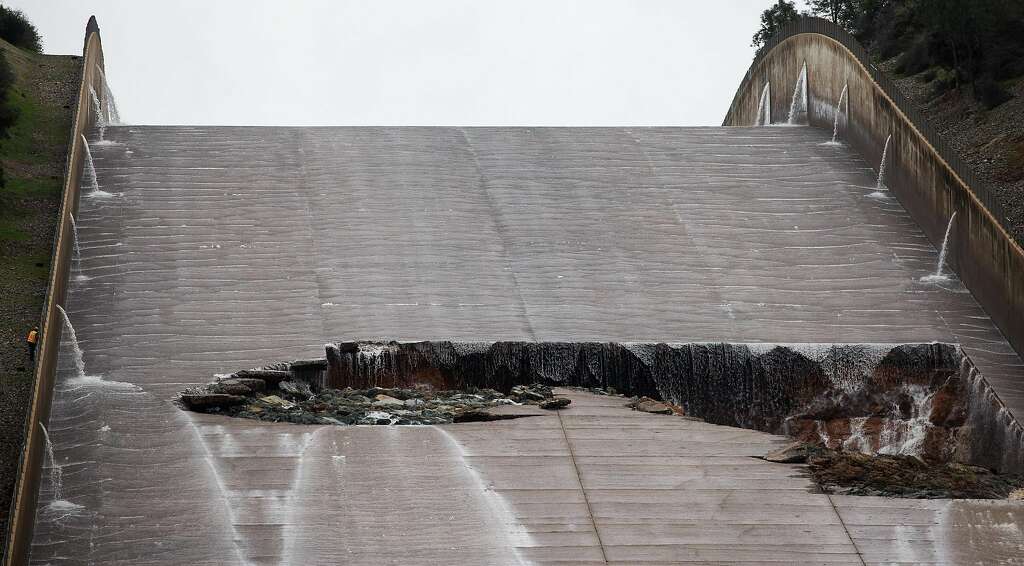 mage 13 of 84
A hole was torn in the spillway of the Oroville Dam while releasing approximately 60,000 cubic-feet-second of water in advance of more rain on February 7, 2017 in Oroville, California.

The department closed the spillway Tuesday after noticing water was flowing irregularly. After stopping the flow, engineers found a gaping hole in the concrete chute.

At the fish hatchery below — one crucial to California's salmon industry, which produces some 7 million fish a season — workers were scurrying to snap up in nets 4 million fish in danger of dying and then trucking them miles downstream to safety. But nearly 5 million other fish and fish eggs couldn't be moved.
The turbidity, or cloudiness, of the water running into Feather River Hatchery in Butte County, roughly 75 miles north of Sacramento, was "off the charts," said Harry Morse, a spokesman for the California Department of Fish and Wildlife. Normal turbidity levels tend to be on a 5 to 10 scale, while Thursday's recordings soared into the 400s, he said.
"This is just uncharted territory," Morse said, adding that a team of scientists were working to rig up makeshift filtration systems inside the hatchery to protect the eggs in danger.
Workers were moving the millions of young fish, said to be about three months too young to safely release into the wild, about 10 miles down the river to Thermalito via giant tanker trucks, to a spot with existing fish infrastructure far enough off the river that they should survive, Morse said.
Workers are removing trees and debris from the corridor near the dam where water would flow in the event the emergency spillway is needed.
Officials say the giant hole does not pose a threat to the earthen dam or public safety.
After dipping down to record-low levels during the California drought, Oroville is now 80 percent full amid a winter of wet storms. The spillway dumps water into the Feather River.
The Associated Press contributed to this report.