From Tibet to Nepal: CIA Declassifies Files on UFO Sightings Over Himalayas

Source: sputniknews.com
The CIA archives show that American spies were interested in UFO phenomenon not just inside the United States and Western Europe, but also sightings were being studied over the Himalaya Mountains.
In 1968, the CIA reported six cases of UFO sighting in the skies over the Indian region of Ladakh and Sikkim and over the countries of Bhutan and Nepal.

On February 19, 1968, a bright object moving at high speed was seen in the sky over the north-eastern Nepal and Sikkim in the north around 21:00 local time.

© Photo: cia.gov
CIA document on Nepal and Sikkim
According to the document, the object was moving at a high speed; it had an elongated shape and was emitting rays of red and green light.
“A fast-moving object, long and thin, emitting red and green bright light, as bright as to cause day-light. Thunder sound heard after few seconds of sighting of object,” the document read.

© Photo: cia.gov
CIA document on Bhutan
The document read that the object was moving, “East to West. However, since due east of Thimpu there is nothing but Indian Territory the direction of flight could well be from North-east to South-west, that is, from the direction of Tibet.”

On March 4, 1968, an unidentified object was seen moving from east to west near the Chang La pass. It flew over the base of the Indian Air Force, in the Fukche and Koyul areas.
“One white light and simultaneously two blasting sounds were heard. Also, one reddish light followed by white smoke,” the CIA report read.

The most interesting thing in this report is an observation that was made on March 25, 1968 in the Kaski district in north-west Nepal.
“A huge metallic disc-shaped object with a six-foot base and four feet in height was found in a crater at Baltichaur, five miles NE of Pokhara,” the report said. Another said, “One white light and simultaneously two blasting sounds were heard. Also, one reddish light followed by white smoke.”
The report further added that similar objects were found in Talakote and Turepasale region. 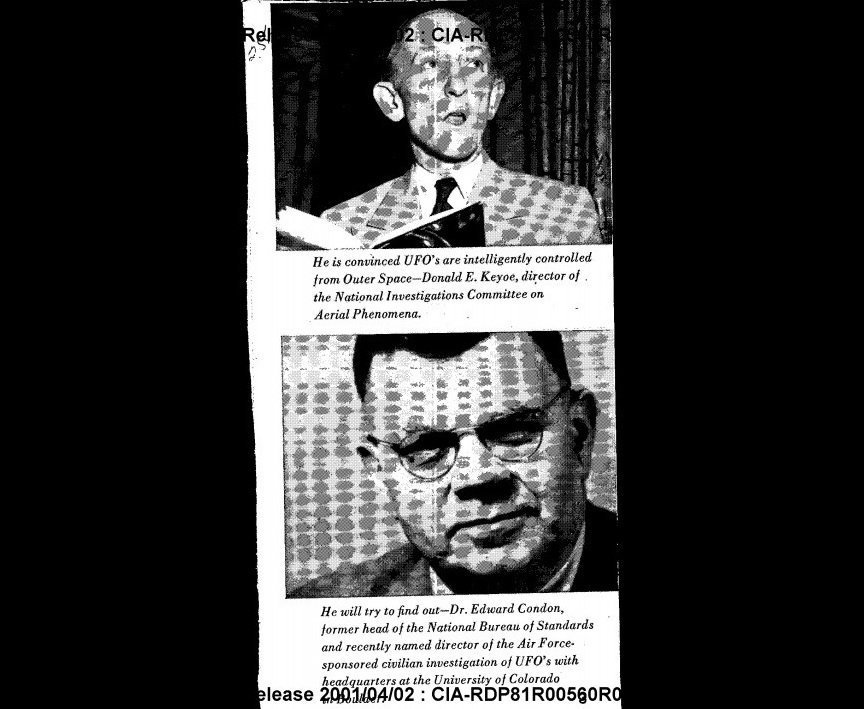 © Photo: cia.gov
Donald E. Keyoe and Dr. Edward Condon
It was prepared for “controlled distribution” and was declassified in 2001. On its cover there is a photo of Donald E. Keyoe, director of the National Investigations Committee on Aerial Phenomena from 1957 to 1969 and a photo of the nuclear physicist Dr. Edward Condon, former head of the National Bureau of Standards.
From 2016, the CIA has regularly made public its internal secret documents related to UFO phenomenon. However, one of the documents reveals that at least 20% of declassified UFO-related papers have no scientific explanation.

The recently-declassified CIA files show the agency’s interest in the UFO phenomenon was without borders. Just like the Nazi Ahnenerbe Institute, they traveled to the Himalayas in search of answers.

Source: The Event Chronicle | By UFOholic
Just a while ago, the CIA made available to the public some 13 million pages of formerly classified documents. Among them the UFO enthusiast could find over 1,700 cases to study. His trained eye would also tell him that number’s too low but that’s another story.
Today’s story is centered around several cases of UFO sightings and encounters that took place in and over the Himalaya mountains in 1968. That year, mysterious and fast moving lights were reported in Nepal, Bhutan and in several regions in India.
The CIA files contain a brief summary of the events and can be viewed on the agency’s website.
At 9 o’clock in the evening on February 19, an apparently supersonic, elongated object was seen as it traversed the sky over north-eastern Nepal and went into the Indian province of Sikkim. As it moved, the object emitted rays of green and red light.

A fast-moving object, long and thin, emitting red and green bright light, as bright as to cause day-light. Thunder sound heard after few seconds of sighting of object,” the case file read.

Two days later, the CIA would investigate another sighting, this time in Thimpu, the capital of Bhutan. A bluish object was reported moving silently on an East to West course. But the report concludes the UFO could have been coming from the direction of Tibet.
Then, on March 4, 1968, a duo of UFOs emerged from the Chang La pass and flew over the Indian Air Force’s base in Fukche.

The report stated that it exhibited particularities of “bright objects seen over South Ladakh, North East Nepal, Sikkim and Bhutan” so it stands to reason these objects behaved in similar ways. But does that allow the assumption that these UFOs belonged to the same entity or group of entities?
Well if it did,  said group could operate out of a hidden base in the area. And according to a popular UFO theory, such a base exists in the vicinity of Kongka La, a high mountain pass located on the disputed border between China and India.
Monks from a number of monasteries in the region claim their orders have known about the mysterious lights for a long time and they describe them as “intelligent.”
In terms of richness and depth of culture, the Himalayas stand tall. Perhaps that is why high-ranking Nazi officials with a penchant for the occult ordered the Ahnenerbe to search India, Nepal and other Himalayan nations for ancient artifacts with hidden powers. And culturally speaking, they had a very good reason to do so.
Sanskrit mythology is rife with descriptions of unbelievably powerful weapons and flying machines with interstellar capabilities. From vimana to vajra, the Himalayan region appears to have been home to a technologically advanced society in its past. In that context, a hidden UFO base still housing the controversial craft could constitute a tempting acquirement. The disputes that rage on along that particular stretch of the Sino-Indian border seem to confirm the presence of a valuable asset nearby.
Going back to the declassified CIA cases, we should point out that the strangest incident recorded by the agency happened on March 25, 1968 in the Kaski district of Northwestern Nepal. If we are to give credence to the report, this circumstance led to the recovery of a flying saucer.

A huge metallic disc-shaped object with a six-foot base and four feet in height was found in a crater at Baltichaur, five miles NE of Pokhara,” the report reads.

Poor in details, the report gives out one important detail: similar objects were discovered in Turepasale and Talakote, two other regions of Nepal. So it seems this was not an isolated incident and the CIA had knowledge of previous crashes.
To the curious mind, a cascade of questions starts flowing. What happened to the UFOs? Where are they now? Were they man-made or otherworldly? Was the recovery of said UFOs without consequences?
In this convoluted enigma, two things are certain: 1. these questions have answers and 2. we won’t be getting them anytime soon.
This article (CIA Secret Files Show Unusually High UFO Activity in the Himalayas) was originally published on UFOholic and syndicated by The Event Chronicle.
RELATED POSTS:
CIA Publishes 12 Million Declassified Documents Online
Recently Released CIA Data on Antarctica