OUT OF MIND » TRUTH IN CONSPIRACY THEORIES? » HISTORIES MYSTERIES » The Asteroid – The Flood – Atlantis and the Alien Gods

The missing cause of the Flood.
The correct location of Atlantis.
The awakening of Atlantis and the imminent return of its ‘gods’.
The antichrist of our time could arise from the ashes of Atlantis. 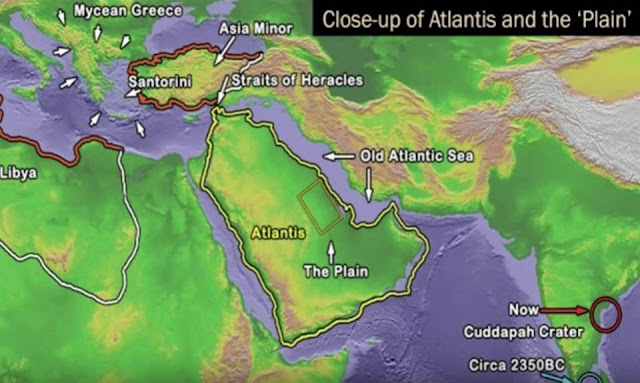 Stan Deyo made a discovery that the actual asteroid that started the Flood hit India’s East Coast created what is today known as the Cuddapah Basin in Eastern India.

Stan calculated that the asteroid with an estimated size at about 15 miles in diameter hit the Earth at a shallow angel of 35 degrees above the surface leaving an outer crater rim 250 miles in diameter. It’s impact crater leads Stan to assess its kenitic energy to be at least 15 times the energy of the Chixulub impact in the Yucatan.

There is geological proof that supports the asteroid impact having depressed the Arabian Peninsula causing land uplifts as far away as Azerbaijan and Turkey.

Even it may have tilted the Earth’s surface 23.4 degrees from upright position, however there are four other officially undiscovered meteor impacts as big as this one that could have contributed to the shift.

Now if we take the book of Enoch it states that 200 giants (Human/Watcher Hybrids) which come of the Nephilim (Fallen Ones/Watchers) descended to Earth at Mt Hermon in Syria, besides the Book of Jasher records their arrival as well.

Plato’s Atlantis account covers one of these ‘Giants’: Poseidon and his hybrid offspring.

Both Plato and the Bible say aliens cross-bred with humans therefore it is understood that Eden and Atlantis had to be in close proximity by land for this cross-breeding to occur.

Atlantis was an island greater in extent than Libya and Asia and when afterwards sunk by an earthquake it became an impassable barrier of mud to voyagers sailing from hence to any part of the ocean.

Whether Plato meant ‘Greater in coastline length’ or ‘greater in area’, the only region meeting both of these parameters as well as being close to the Garden of Eden in Tanzania was, then, the island of the Saudi Peninsula.

Plato describes also the ‘columns of Heracles’ is commonly thought to mean the ‘Strait of Gibraltar’. However Plato also refers to the ‘Straits of Heracles’ elsewhere. There are either two places or only one of these is correct. And what about Noah, did he live in Atlantis? Possibly, certainly close by.

The above text is an extract taken from Stan Deyo’s presentation about the missing cause of the Flood and the mysterious disappearing of Atlantis.

Stan Deyo is convinced that based on his research, analyses including several proofs of Atlantis being the Arabian Peninsula.

Some of Stan Deyo's proofs:

01. The areas and coastlines of ancient Libya and Asia Minor match Arabia.
02. The ‘keystone’ artifacts are models of Poseidon’s Island.
03. The two water aquifers in Dammam in a region where hot springs still exist.
04. The Gilgal circles were made by the giants of Bashan where Og was king.
05. The Greek Decapolis cities were established to be near Atlantis.
06. The Greeks named Gadara after Gadeirus.
07. Atlantis was destroyed by flood and large earthquakes (like the asteroid impact).
08. Arabian Peninsula was titled by a catastrophic event.
09. The straits of Herakles were where the Orontes River empties into the Mediterranaen.
10. At the Mahd Ad Dabab mine the quartz veins contain gold, copper, iron, lead and zinc sulphide – components of orichalcum.
11. The ‘fertile’ plain region is on the west coast of the Arab (Persian) gulf with Dammam.

View Stan Deyo's scientific proof that Atlantis was real and according to him the World needs to know this. In a way, Atlantis is rising again in the global political community and you will be astonished at the prince who is in charge of Atlantis today.

OUT OF MIND » TRUTH IN CONSPIRACY THEORIES? » HISTORIES MYSTERIES » The Asteroid – The Flood – Atlantis and the Alien Gods

»  What Became of Atlantis: The Flood from Heaven
» Are We The Next Atlantis? Graham Hancock - Magicians of the Gods
» ‘Sky Gods’, Credo Mutwa & The Alien Agenda
» Ancient Legends of the Reptilian Alien Gods: China
» DNA Of The Gods: The Anunnaki Creation Of Eve And The Alien Battle For Humanity