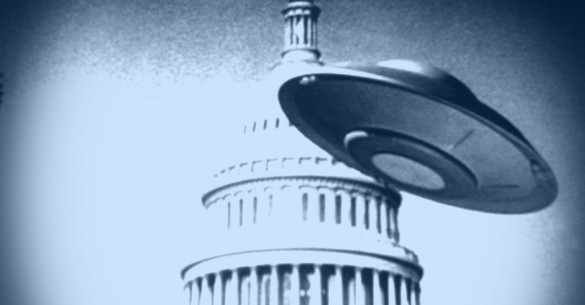 UFO Disclosure lobbyist Stephen Bassett has started up a GoFundMe campaign to raise money for his lobbying project to bring about an announcement from the United States government that extraterrestrials are interacting with humanity and earth.
On the campaign page, he writes,

This funding effort is in service to every citizen of every nation now convinced the world should not wait one more day for confirmation we are not alone is this universe. For 70 years this truth has been embargoed by your government. After 20 years of engagement of the issue, I know this embargo can end this year with your help.

Bassett is the founder of the Paradigm Research Group, an activist organization that has been working since 1996 to end the “truth embargo” established by the American government in regards to an alleged ET presence on earth.
The GoFundMe campaign, which is attempting to raise $50,000, is slated for a few key projects. First, it will allow his group to “keep the pressure on the media to engage the politics of Disclosure throughout 2017” and to hire a “public relations liaison who has substantial contacts with the new Administration.” Secondly, it will be used to set up an office in Washington DC, “seek professional speaker representation,” and to begin working in European countries, as well as to develop media and revamp their current website.
Many have been critical of the Disclosure movement (myself included), and any lobbyist or movement needs to accept that. Criticism leads to a healthy democracy, which is what Bassett is essentially trying to establish by pushing for Disclosure. However, one does have to admire him for trying. It has undoubtedly not been easy to do this work, and trying to raise money for this project is similar to Atlas carrying the world upon his shoulders. Except the world is flat, at least according to Mr. Bassett; it would be more like carrying a serving tray full of water and rocks upon your shoulders like some sort of strange cosmic waiter.
All joking aside, Mr. Bassett is doing what he believes in, and pushing for more transparency in government is a noble pursuit. Perhaps the government is hiding knowledge via a “truth embargo.” Perhaps the millions of sightings, countless witnesses, and allegedly truthful testimony of dozens of high ranking politicians and military personnel actually points to one of the greatest secrets ever kept. The world may not yet be convinced, but perhaps one day that will change.
If anyone thinks that this is truly a cause worthy of their attention, one can literally put their money where their mouth is. It all depends really upon what people believe at this point…unless they believe the earth is flat. It’s not. It’s an oblate spheroid. That is a fact, a real fact, not one of those alternative ones people just make up.