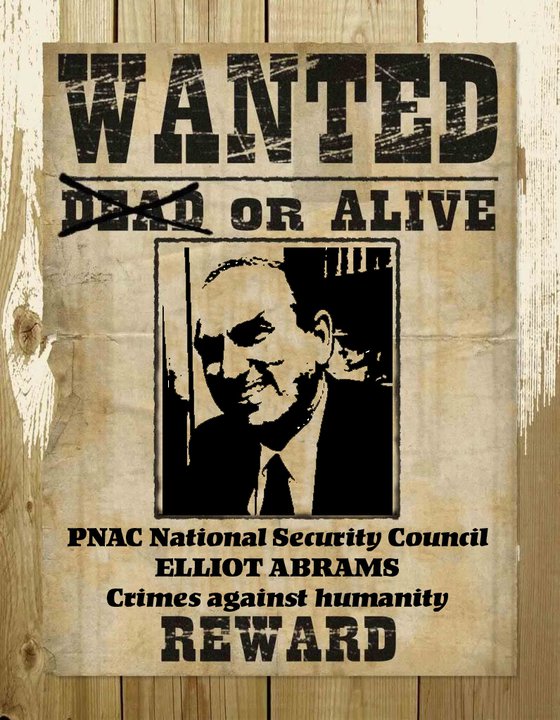 Zealous Iraq War Hawk Abrams has no business in the Trump Administration.

“The choice of Abrams, an unashamed proponent of promiscuous military intervention abroad, would be a particularly a stunning reversal of candidate Trump’s claim to reject his predecessors’
failed policies of perpetual war.”
(Source: Elliott Abrams Doesn’t Belong At The State Department)

State of the Nation
That an inveterate warmonger like Elliot Abrams is even under consideration for the number 2 position at State is quite shocking.
In light of Candidate Trump’s incessant promises to steer a new path for American policy, such an appointment smacks of outright betrayal.
Many voters for Trump did so only because of his commitment to wage peace abroad instead of war.  How in the world does an Abrams appointment jive with that?!

Should President Trump follow through with such a catastrophic move at State, he will lose a massive amount of credibility.  In fact, there are very few rabid Neocon warmongers like Abrams who could even surpass his lust for war and conquest.  Therefore, if Elliot Abrams becomes Deputy Secretary of State, it will be the single greatest slap in the face to his base thus far.
The Internet is replete with articles about Elliot Abrams direct involvement with the incitement of military ventures around the world.  His loyalties to the war-making Neocon agenda are extremely well known and much feared around the world.  Why, pray tell, would Trump allow such a dangerous policymaker even near the Department of State?

Members of the U.S. government and politics who hold dual US / Israeli citizenship
Abrams is also a dual US / Israeli citizen which always sends up a HUGE red flag.  How can Trump even hope to Make America Great Again (MAGA) when key appointees have loyalties to other nations, especially when they have proven to put Israel first, second and third?
The obvious answer is President Trump can’t MAGA when warmongers occupy critical positions at State.  As a matter of historical fact, the U.S. Department of State has been used by the past several administration as a de facto Department of War.  The US Secretary of State is now well known across the planet to be the point person for initiating unprovoked wars of aggression wherever the Military-Industrial Complex (MIC) wants to steal land or water, oil or natural gas, gold or silver, uranium or diamonds, timber and etc. Sometimes the MIC is just looking for a particularly good geo-strategic territory on which to set up a new army, naval or air force base.  Or, the MIC-instigated military incursion is merely a geopolitical move on the global chessboard by a president who feels the need to “wag the dog”.
The bottom line here is that Trump’s most important promise to the American people is that he would never lie to US, nor ever let US down.  With the appointment of Elliot Abrams, he would do both … and would do so in a glaring fashion.


A word of warning

President Trump is a businessman.  He knows that he cannot MAGA and pursue a foreign policy of needless war-making.  With a $20 trillion national debt, there is simply no wiggle room. Either he rebuilds America, as promised; or he wages war, as he promised not to do.
In view of this horrific development, it can be stated with absolute certainty that President Trump will lose a large swath of his support with Abrams anywhere near State.  Much of his base wanted him to shut down the wars and bring the soldiers back home.  They wanted a true peace brokered with Russia, a durable peace agreement negotiated between Israel and Palestine, as well as no more saber-rattling with Iran or China.
Surely Trump knows that, as an US/Israeli dual citizen, Abrams fealty will always lie with the Sunni Muslim governments throughout the Middle East.  Hence, the Shia-dominated states like Iran and Iraq will become the focus of highly misguided policy from Abrams as Deputy Secretary of State.  Such a bad move will serve to greatly inflame the American body politic. It is quite likely that citizens on both sides of the political divide might even make common cause against Trump for such a disastrous appointment.
Let this admonition serve as a stark warning NOT to follow through with this political fiasco.  If President Trump does not heed this and similar advice, it will only bring ruin upon him and his entire administration.

And it’s a critical one.
Abrams married the now deceased daughter of Norman Podhoretz–Rachel.  Podhoretz is literally one of the granddaddies of the Zionist Neocon movement.
“Norman Podhoretz was one of the original signatories of the “Statement of Principles” of the Project for the New American Century founded in 1997.[11] That organization sent a letter to President Clinton in 1998 advocating the removal by force of Saddam Husein in Iraq.”[1]
She was also the brother of John Podhoretz, the current editor of the Neocon magazine–Commentary.
“Podhoretz was a steadfast supporter of U.S. president George W. Bush, and his 2004 book Bush Country called Bush “the first great leader of the 21st century”.
[2]
What’s the real point here.  This whole Zionist Neocon tribe is dangerous beyond belief and imagination.  For those who are uninitiated in this vital subject matter, please read the following two exposés.
The Neocon Zionists Must Be Arrested And Put On Trial For False Flag 9/11 Terrorism
Zionist Neocon Cabal Schemed To Use The U.S. Military To Invade 7 Mideast Countries
State of the Nation
February 9, 2017
Source
[1] Norman Podhoretz
[2] John Podhoretz
Recommended Reading for the Trump Administration