“The best part with the helicopter is I can fly over and gain this connection between all the other burial sites, between the pyramid and the temple, and get an understanding of what that is from the air,” says Turchik.


Every time we think of Pyramids we immediately wander off in our minds to Egypt, where the three majestic monuments at the Giza plateau stand tall and proud.
However, the truth is that there are pyramids scattered everywhere across the globe, and most of these pyramids have little contact with the outside world. In fact, I had no idea that there were so many pyramids on Earth until recently.
According to Slate, “there are more pyramids in one small section of the northern Sudanese desert than there are in the whole of Egypt.”
Sudan is one of those places where we can find long-lost pyramids and National Geographic’s engineer Alan Turchik set out to show the whole world their beauty.

Armed with a remotely operated mini­-helicopter, National Geographic engineer Alan Turchik gets a bird’s­-eye view of 3,000-­year-­old royal burial chambers. The unique perspective is helping to unravel ancient Nubian mysteries.
“The best part with the helicopter is I can fly over and gain this connection between all the other burial sites, between the pyramid and the temple, and get an understanding of what that is from the air,” says Turchik.
Modern-day Sudan was home to three Kushite kingdoms during antiquity. The first had its capital at Kerma (2600–1520 BC). The second was centered on Napata (1000–300 BC). Finally, the last kingdom was centered on Meroë (300 BC–AD 300). 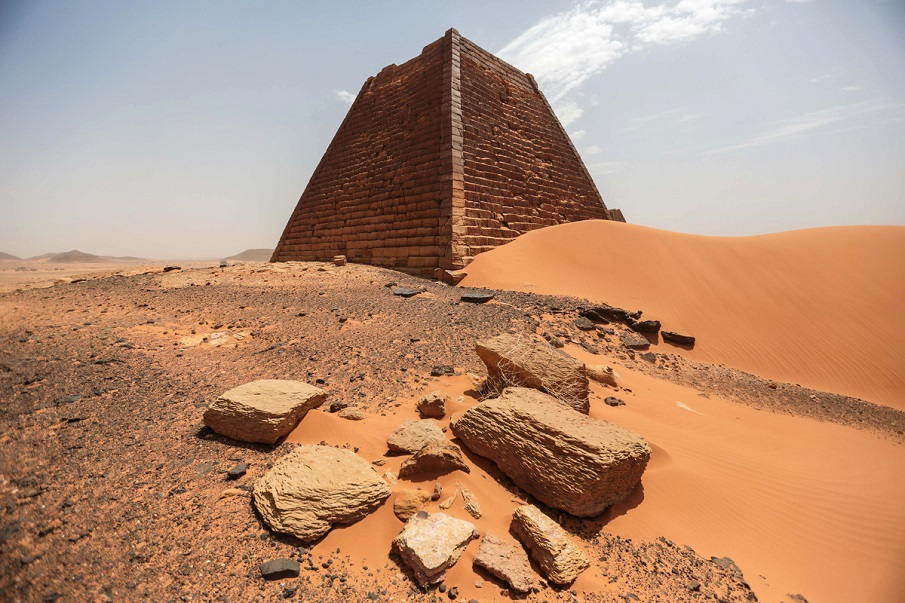 Unlike the ancient Egyptian pyramids, the Nubian Pyramids were built specifically as tombs for the numerous Queens and Kings of the Kushite kingdoms.
“You don’t really know what happened in the past, and to be able to investigate that … it’s like you’re a detective,” says Turchik, explaining how the excavations slowly chip away at the mystery surrounding this ancient culture.

Interestingly, around 255 pyramids were constructed in Nubia over a period of a few hundred years.
The most extensive Nubian Pyramids side is located at Meroe. According to experts, during the Meroitic period around forty queens and kings were buried there.
The size and complexity of the Nubian pyramids are much different than their ancient Egyptian counterparts. The ancient Nubian pyramids were erected of stepped courses of horizontally positioned stone blocks. Their height ranges from approximately 6 to 30 meters.
Nearly all of the ancient Nubian pyramids were looted in the past.
Sadly, the some of the Nubian Pyramids were damaged during the 18300’s when treasure hunter Giuseppe Ferlini blew the tops off about 40 tombs during his quest for treasure.
Some of the pyramids have been successfully restored, but many of the ancient monuments still remain partially destroyed.
According to UNESCO, The pyramids bear decorative elements from the cultures of Pharaonic Egypt, Greece and Rome, making them priceless ancient relics.