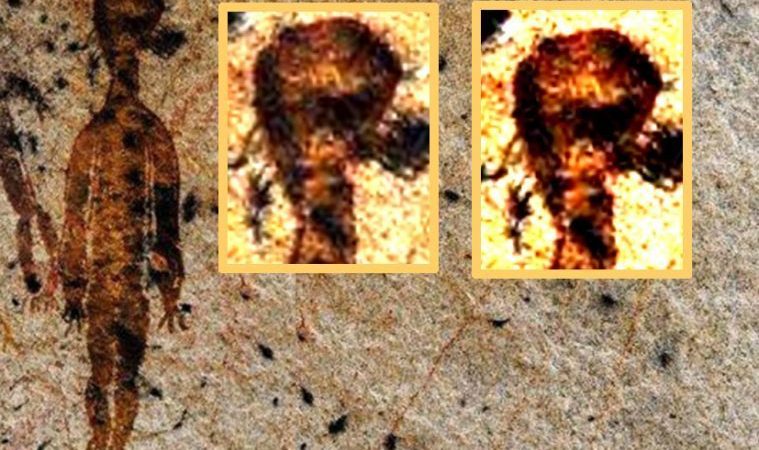 
According to archaeologist JR Bhagat, these paintings depict extraterrestrials. The Chhattisgarh state department of archaeology and culture is planning to seek the help of NASA and ISRO for research regarding the paintings.


Our ancient world continues to become more mysterious by the day, as 10,000 year old rock paintings depicting possible extraterrestrials and UFOs have been found in Chhattisgarh, India. These can be added to the long list of mysterious and unexplained “ancient art” that seems to lend to the belief that our ancient world and the people who lived at that time had contact with beings that did not originate from this planet.
“The findings suggest that humans in prehistoric times may have seen or imagined beings from other planets which still create curiosity among people and researchers. Extensive research is needed for further findings. Chhattisgarh presently doesn’t have any such expert who could give clarity on the subject. The paintings are done in natural colours that have hardly faded despite the years. The strangely carved figures are seen holding weapon-like objects and do not have clear features. The nose and mouth are missing, and in a few pictures they are even shown wearing spacesuits. We can’t refuse the possibility of imagination by prehistoric men but humans usually fancy such things.” – JR Bhagat (source)
According to the Times of India:

“There are several beliefs among locals in these villages. While few worship the paintings, others narrate stories they have heard from ancestors about “rohela people” -the small sized ones -who used to land from the sky in a round shaped flying object and take away one or two persons in the village who never returned.” (source)

Antiquity is filled with stories of beings, materials and flying objects that, according to modern day thinking, should not have existed. For anybody who has studied ancient mythology, they would know that a large amount of evidence exists today to turn those ‘mythical stories,’ (as we interpret them) into stories of a possible ancient reality. To see more examples of that, please click HERE.
A couple of years ago, With Prime Minister Narendra Modi in attendance as well as various other prestigious scientists from all over the world, the Indian Science Congress is probably the last place you would expect a presentation regarding ancient flying machines that could traverse the Solar System. For the first time in the history of the congress, a presentation was given outlining the depiction of these ancient flying ‘space ships.’ You can read more about that in an article we published about it here.
Every single year this topic seems to be gaining more and more attention.
Here are some of the pictures that were found: 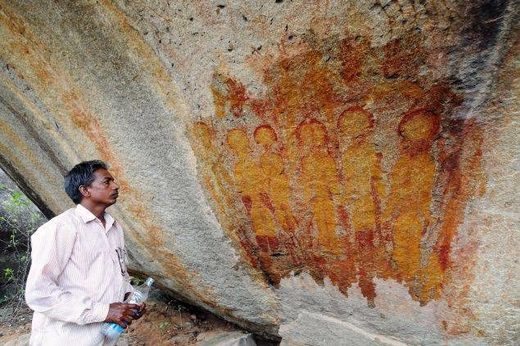 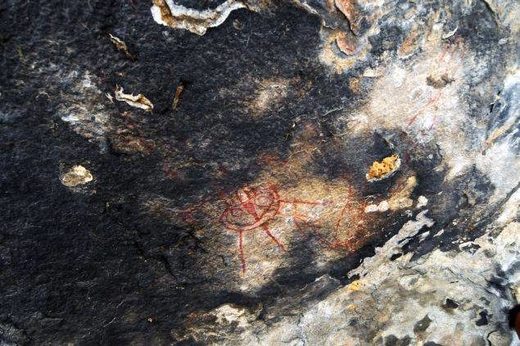 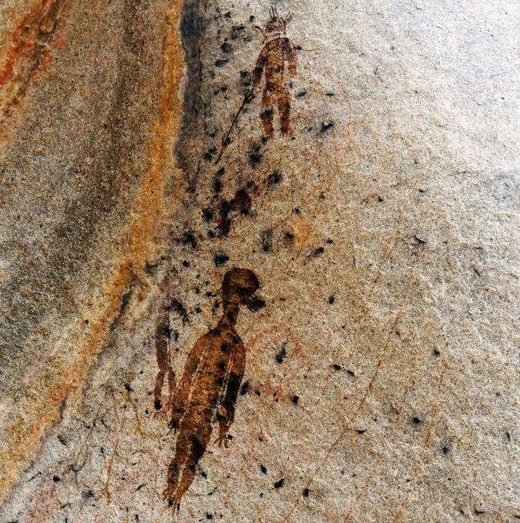 More Ancient Art
Ancient cave paintings depicting possible UFOs and extraterrestrials have been found all over the globe. This one (one of the earliest known forms of human art) is from the French cave of Pech Merle. In the paintings within this cave there are several objects that resemble flying saucers. The paintings here are approximately 20,000 years old, and of course we can never really know what the true meaning of the painting is, but it is interesting nonetheless. 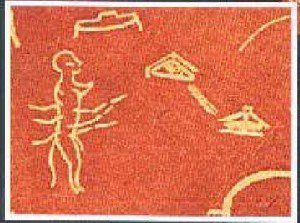 This is a cave painting found in Kimberley, Australia. They were painted by the native Aborigines approximately 5,000 years ago. These are depictions of what they called Wandijina, or sky beings. In their tradition these beings were part of the beginning of creation, and had great power of nature. The first thing I took from this were the large heads, a common theme among today’s purported extraterrestrial visitations. 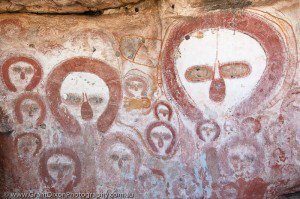 There are paintings like this all over the world. Just like there are many ancient pyramids built all over the world by different civilizations at different times that had no contact with each other, these cave paintings share the same anomaly. These are petroglyphs discovered in Utah, in the Barrier Canyon, which depict a number of tall beings with similar shaped heads as to the ones in Australia. There are also similar beings painted on rocks in Utah’s Sego Canyon. 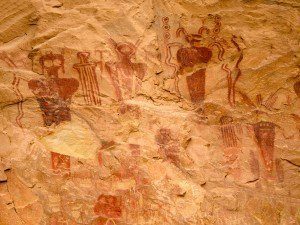 Below are some more examples of UFO and ET depictions throughout history:
1. “The Crucifixion” hangs above the altar at the Visoki Decani Monastery in Kosovo, Yugoslavia, it was painted in 1350.
2. This image is from the 12th century manuscripts “Annales Laurissenses.”
3. From the French book “Le Livre Des Bonnes Moeurs” by Jackques Legrand, 1338
4. “The Miracle of the Snow” by Masolino Da Panicale circa 1400 from Florence, Italy
5. This image is from the 12th century manuscripts “Annales Laurissenses”
6. Broadsheet picture by Samuel Coccius illustrates many flaming and “large black globes” that were reported to have appeared in the skies over Basel, Switzerland in 1586. This one is from the Wickiana Collection, Zurich Central Library, Switzerland.
7. “The Madonna with Saint Giovanninoz” painted in the 15th century, Palazzo Vecchio lists the artist as unknown 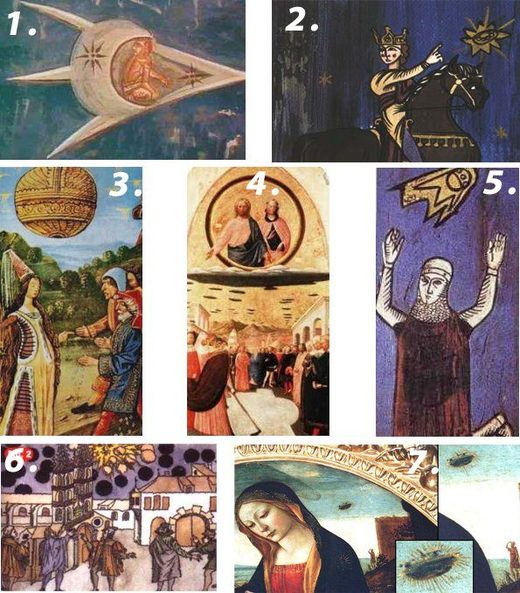 UFO’s In Antiquity
Sightings of strange objects in the sky have been recorded for a very long time. For example, in 217 BC “at Arpi round shields (parmas) were seen in the sky” (Liv. 22.1.9; Orosius 4.15). A parma was a small round shield made of iron, bronze, and other metals. According to NASA, “we do not know whether the luster of these devices (and not just their shape) was intended to be an element of the description. Mock suns are an unlikely explanation, since in the Roman prodigy lists these were routinely described as ‘double suns’ or ‘triple suns’ (i.e. two mock suns on either side of the real one).” (source)
Another example would be the picture above, known as the “Golden orb” phenomenon seen at Spoletium, Umbria, Italy in 91 BC (from Jaques Vallee, Chris Aubeck: Wonders in the Sky.)
The one below is from August 7, 1566. At dawn, many citizens of Basel (Switzerland) reported seeing many spheres for several hours. 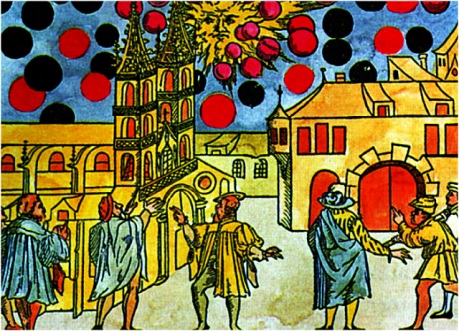 In 173 BC “at Lanuvium a spectacle of a great fleet was said to have been seen in the sky” (Liv. 42.2.4). In 104 BC, “the people of Ameria and Tuder observed objects in the sky rushing together from east and west, those from the west being routed.” In 100 BC, “a round shield (clipeus), burning and emitting sparks, ran across the sky from west to east, at sunset.” Thus Pliny (Nat. 2.100), although Obsequens (45) called the phenomenon “a circular object, like a round shield.” (source)
The Ramayana is a Veda epic that dates back to the fourth/fifth century, B.C. (Mahabharata VIII.31.80). In one passage, a vimana is described as a “chariot that resembles the sun, that aerial and excellent chariot going everywhere at will, resembling a bright cloud in the sky, and the king got in and the excellent chariot rose up into the higher atmosphere.” (Dolan, Richard. UFOs For the 21st Century Mind. New York: Richard Dolan Press, 2014) (source 2)(Daniken, Erich. Chariots of The Gods. New York: Berkley Books, 1970).
Vimanas are also described in the Mahabharata, another ancient text. In this case, measurements are given for one of the vimanas. It’s described as having twelve cubits in circumference, with four strong wheels, approximately 20 to 25 feet in circumference, about seven feet in diameter.
“They roar like off into the sky until they appear like comets.” The Mahabharata and various Sanskrit books describe at length these chariots, “powered by winged lighting…it was a ship that soared into the air, flying to both the solar and stellar regions.” (source)
This is something that’s been documented by several different cultures from around the world up to the present day. And although many of today’s sightings can be explained by modern day conventional science, a large portion, not small, remain a complete anomaly.
Below is a video of Dr. Jacques Vallée, whose latest work includes a recently published analysis of 500 UFO cases from biblical antiquity to 1879 before the development of the modern day industry. That was published in his book Wonders of the Sky.
Vallée co-developed the very first computerized mapping of Mars for NASA. He is also noted for his work at the Stanford Research Institute (SRI), where he helped create ARPANET, a technology that became the foundation for the modern day internet. He also supports the extraterrestrial hypothesis as one explanation for the UFO phenomenon, meaning that some of these UFOs are indeed intelligently controlled, remotely or not, by extraterrestrial beings. One of his many published papers, written in the late 90s, appeared in the Journal of Scientific Exploration. Titled “Estimates of Optical Power Output in Six Cases Of Unexplained Aerial Objects With Defined Luminosity Characteristics,” (source)(source) it offers a comprehensive look at the oddities military pilots encounter when they are ordered to intercept one of these UFOs.