OUT OF MIND » THE INSANITY OF REALITY » JULIAN ASSANGE & WIKILEAKS & » WikiLeaks: Was Flynn’s Resignation Due To A ‘Destabilization Campaign?’

WikiLeaks: Was Flynn’s Resignation Due To A ‘Destabilization Campaign?’ 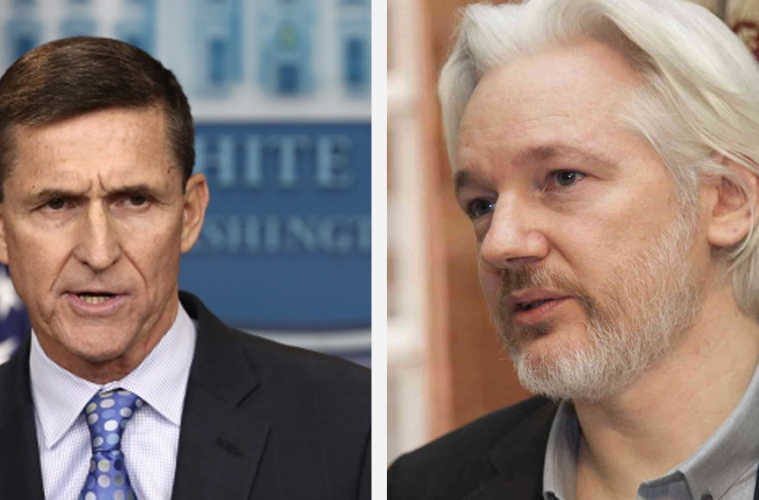 On Monday news broke that President Donald Trump’s National Security Advisor, Michael Flynn, had resigned. The information raised many eyebrows, especially given the exposure of corruption within the political system as of late.
In no time, many theories about why this happened began to hit the media. Are we getting the whole story and is there a bigger picture to look at? Let’s explore.
Flynn’s resignation came following weeks of speculation about his ties to Russia. Days of reporting went live about the specifics of his calls with Sergey Kislyak, Russia’s ambassador to the United States, in which the pair discussed U.S. foreign policy toward Russia. This action violates federal law which led to a heap of controversy as to whether or not the president could support his pick.
News reports then revealed that the White House had been warned last month by the then acting attorney general Sally Yates — prior to her being fired for advising justice department lawyers that the travel ban was “not lawful” — that Flynn could be subject to blackmail.
“I have sincerely apologized to the president and the vice president, and they have accepted my apology,” Flynn explained in his resignation letter.

WikiLeaks stepped in on Tuesday regarding the political events, blaming a “destabilization campaign” by the media and Democrats for Flynn’s resignation.
advertisement - learn more

The organization tweeted:
When a Washington Post op-ed exposed the Flynn–Kislyak call in mid-January, Pence was quick to defend Flynn, denying any wrongdoing.
Flynn reportedly discussed sanctions former President Barack Obama inflicted on Russian operatives following the revelation by the U.S. intelligence community that the Kremlin ordered cyberattacks and leaks meant to hurt Democratic nominee Hillary Clinton.
Flynn reportedly advised Russia to hold off until Trump took office, when he would have the opportunity to retract the sanctions.
WikiLeaks role in the presidential campaign meant the release of various emails that were apparently stolen from the Democratic National Committee (DNC) and Hillary Clinton campaign chairman John Podesta. The organization was criticized for being one-sided in its leaks, as no detrimental information regarding Trump came forward. However, WikiLeaks founder Julian Assange claimed the organization simply didn’t have proper leaks to provide as of yet.
WikiLeaks also denied getting hacked emails from Moscow, despite the intelligence community believing that Russia was the main source of the DNC and Podesta hacks, and Kremlin was interfering with the campaign to ensure a Trump win. On this accusation WikiLeaks stated the main goal of the organization is transparency.
Konstantin Kosachev, chairman of the foreign affairs committee at the upper chamber of the Russian parliament, noted that firing Flynn for his contacts with Russia is “not just paranoia but something even worse.”
“Either Trump hasn’t found the necessary independence and he’s been driven into a corner… or Russophobia has permeated the new administration from top to bottom,” Kosachev said.
A “destabilization campaign” by the media and Democrats for Flynn’s resignation makes sense. U.S. intelligence agencies zeroed in on Flynn’s communication with Kislyak right after Russia agreed not to retaliate for Obama’s sanctions.
Furthermore, the list of the events, exposed by the Post, the New York Times, and other outlets, all came from anonymous sources within the U.S. government.
So what is the real story?

We’re seeing once again where our current ways lead us. A world so invested in political culture and ‘sides’ leads to ultimate disorganization, battling, corruption and fear. All things that don’t lead to a peace driven and thriving society. These actions are happening to challenge us to think differently.
So what do we do NOW as we have to work our way out of this politically driven way of seeing the world? It all comes down to the conversation we create and our world views. We can speculate all day, create media built around multiple sides and political agendas to further confuse and divide people, or we can look beyond that and simply ask ourselves what we can do instead. What our world could look like if we didn’t play into these dramas and instead projected a world we wanted to see.
But this is easy to say and harder to do. So what would that look like? How can we dream beyond our current ways and actually organize around these ideas? How can we strip out political identification and come together to go after what world we want to live in?
We don’t have all the answers, but these are the thoughts we must begin to go after and converse around vs. simply speculating on who hates who and who’s doing what over and over again while not even thinking about what’s possible.
We must begin to have conversation in a new direction and end the old rhetoric. So think outside the box. What can our world really look like and how can we make that happen? We have so many brilliant and creative people who can help form these movements but we stop dead in our tracks when we step back into our current world views and meaningless rhetoric. The to shift consciousness on the matter.
What does your world look like?
Thanks to: http://www.collective-evolution.com

OUT OF MIND » THE INSANITY OF REALITY » JULIAN ASSANGE & WIKILEAKS & » WikiLeaks: Was Flynn’s Resignation Due To A ‘Destabilization Campaign?’