Healing Field: CBD-Rich Cannabis Is Beginning to Take on a Whole New Dimension 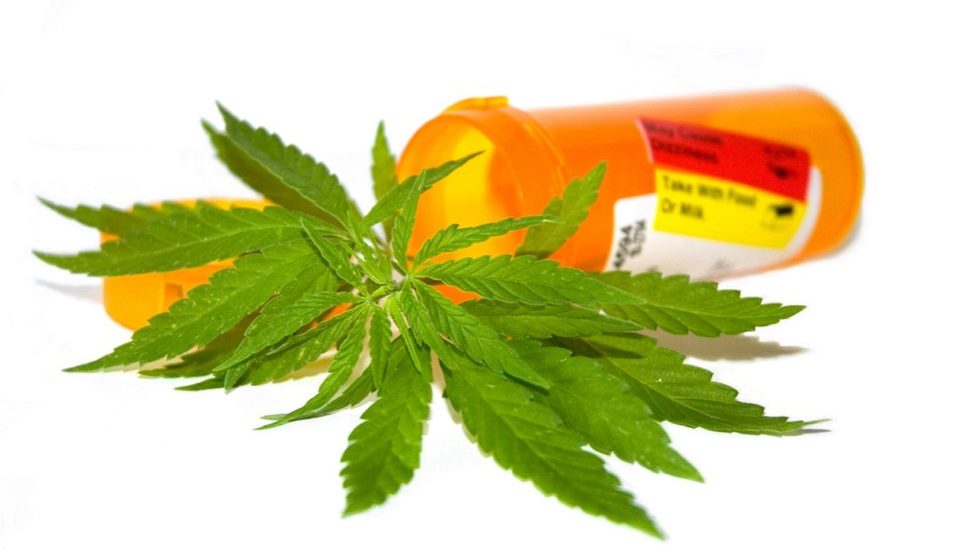 
The Rocky Mountains are behind me somewhere, nowhere in sight. The Kansas border is 100 miles ahead. This is the western edge of the Great Plains, the vast expanse of prairie in America’s heartland that stretches from Texas to beyond the Canadian border.
On this early fall morning, I’m meeting Craig Neal and his wife Celena at their home in Rocky Ford, a farming community of about 4,000 known primarily for growing juicy melons. Craig and Celena aren’t your average country farm couple. They weren’t raised in farm families, and they aren’t natives of Colorado either.
They’re both originally from Florida. But Craig went to college in Colorado and eventually went on to work as a pot grower in a Denver dispensary. So how did he wind up in sleepy Rocky Ford?
“I’m a networker,” Craig says simply. “I’ve met lots of people throughout the cannabis industry and made some valuable connections.”
When Colorado went fully legal, allowing the retail sale of recreational pot, hordes of entrepreneurs searched for a doorway into the new industry. “It was the Green Wave,” Craig says. “Everybody wanted to cash in. I was fortunate to run into the people at Folium Biosciences, who were looking to establish brand identity with CBD-rich cannabis.
“I also happened to know farmers who were looking to stretch out beyond the local agriculture,” he adds. 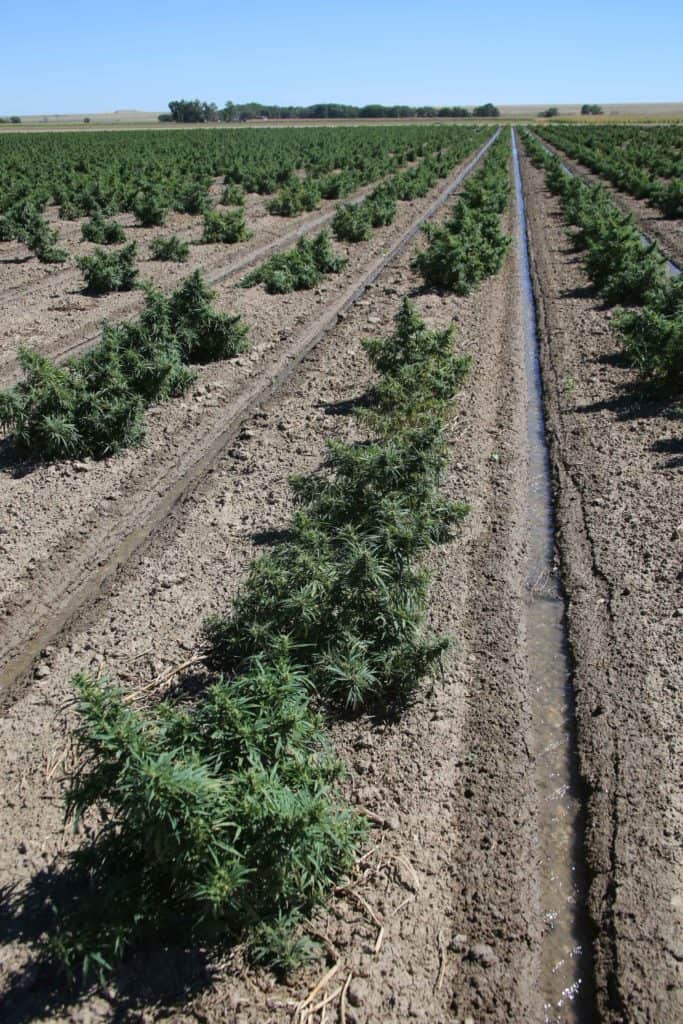 The CBD crops of Folium Biosciences stretch out for acres in La Junta. (Photo by Dan Skye)
Long story short, the folks at Folium invited him down to their headquarters in Colorado Springs. Craig knew that he had both the contacts and the know-how to make their dreams a reality. “Because really,” he explains, “growing CBD-rich cannabis is no different from growing traditional marijuana.”
He was offered a position—director of grow operations—but this was no leisurely transition. Folium was hot to get started instantly. In a matter of days, Craig quit his job, packed up his things and headed to Rocky Ford with Celena.
In Colorado, the official state designation for CBD-rich cannabis is “CBD hemp”—plants with less than 0.3 percent THC. It can be confusing: Although industrial hemp and marijuana are of the same species, they have nothing in common agriculturally. Industrial hemp crops are notable for their long, thin, bamboo-like stalks, while the CBD-rich plants in the Folium fields—a strain dubbed WHC1—are short and squat, no higher than 3 feet.
While industrial hemp crops do contain CBD, the amount is far less than the CBD-rich cannabis harvested by Folium. Huge crops of industrial hemp are required in order to extract only a small amount of CBD. Also, industrial hemp is a bio-accumulator—meaning the plant naturally draws toxins from the soil. Consequently, CBD products derived from industrial hemp may contain contaminants.
But Craig explains that WHC1 is a highly hybridized strain, bred rigorously to reduce the THC content. It’s remarkable for its 59:1 ratio of CBD to THC and its overall CBD content, which has been measured between 8 and 18 percent. It’s a registered strain with the Colorado Department of Agriculture, and the oil that Folium Biosciences is producing has proved to be extremely effective in treating children with epilepsy.
Folium has become the largest vertically integrated producer of CBD-rich hemp oil in the world. Its proprietary engineering process isolates and removes unwanted compounds and generates maximum potency, thereby ensuring a full-spectrum oil that includes high levels of CBD and terpenes, ensuring a consistent, pure product.
At Folium’s headquarters in Colorado Springs, over a million clones are prepared in indoor grow operations and greenhouses for the fields. Craig and Celena oversee the crops in conjunction with the farmers. 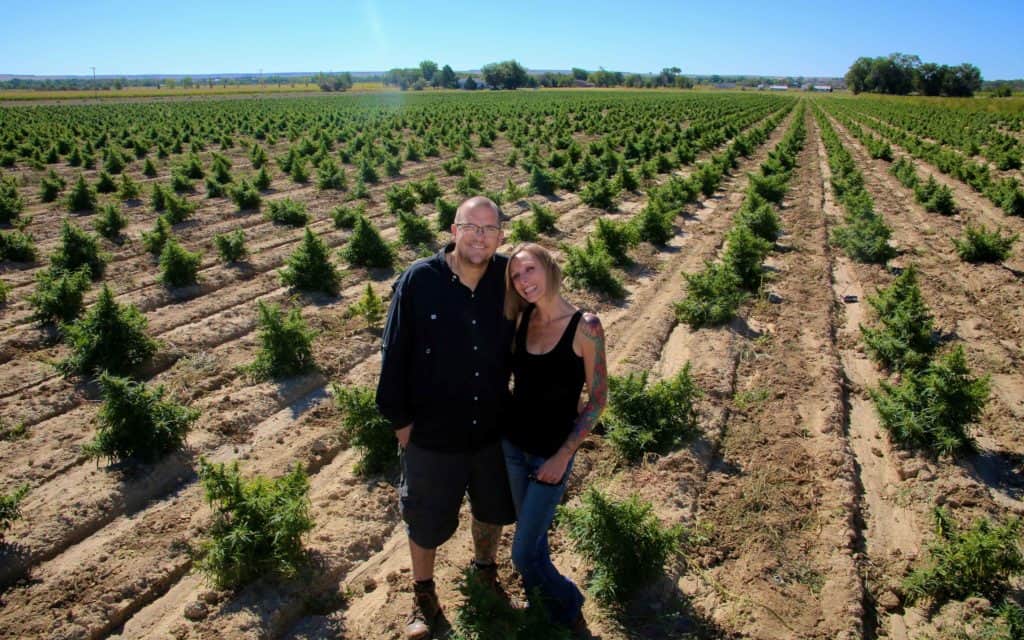 Cannabis farmers Craig and Celena Neal (Photo by Dan Skye)
Last year, Folium harvested 110 acres in partnership with Diamond A Farms in nearby La Junta. This year the harvest was a bit less, due to the Department of Agriculture’s refusal in the spring to accept Google maps as a proper submission of a farm’s planned acreage. So Folium contracted with other local farmers to grow 45 acres of CBD-rich cannabis in 2016. However, in the coming year, over 500 acres are being primed for cultivation.
Obviously, Craig and Celena have their hands full. They’re in the fields or at the mammoth production facility, a former Wal-Mart, where the crops are dried and prepared for transport to processing facilities. Though both are native Floridians, they say that life on the farm has been a blast. 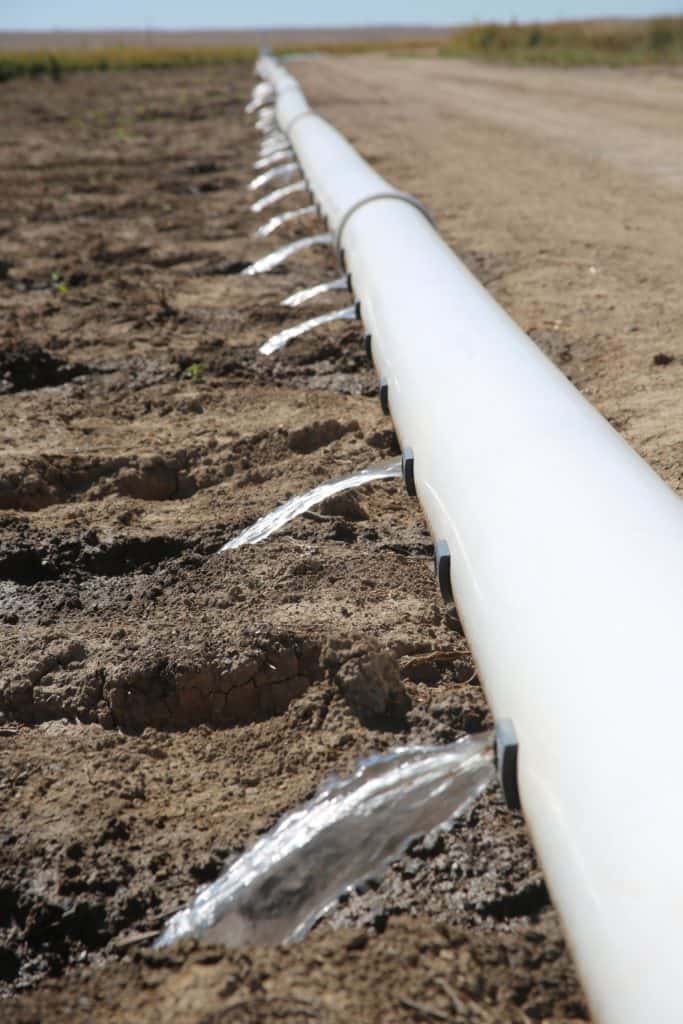 Irrigation provides the crops’ water supply. (Photo by Dan Skye)
“We were already homebodies,” Celena tells me. “We were never much for going out. We love it out here—the quiet—and we know we’re doing something good, something that benefits people who are very sick.”
But there’s a stigma to deal with, too. Craig and Celena are newcomers, involved in an enterprise that many of the locals still believe is the equivalent of drug trafficking. Around town, they get pointed at and talked about—but nothing overt. Of course, this past year they did run into farmers who wouldn’t even consider leasing their fields to Folium due to the nature of the crop. Craig says it’s not all that surprising, considering the conservative nature of the community. Still, it is somewhat puzzling: Why would a farmer who’s having trouble paying the bills refuse to grow a legal crop—one that’s a proven moneymaker?
“In time, that will change,” Craig says. “Once they recognize the simple economics.”
Visit foliumbiosciences.com.
Related: New England’s Patriot Growers
For all of HIGH TIMES’ grow coverage, click here.