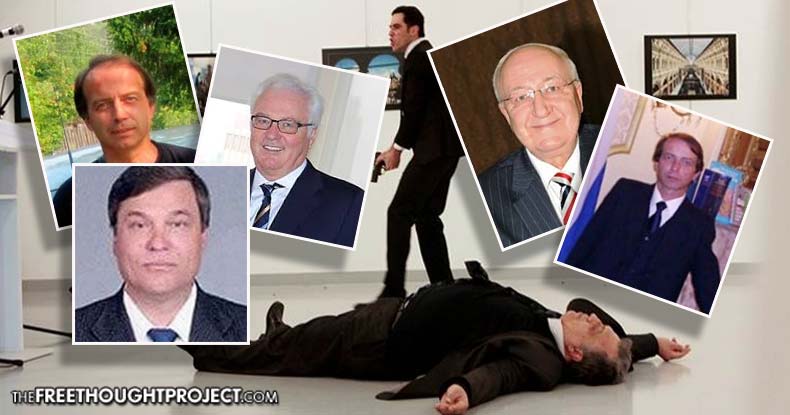 By Claire Bernish
Russian diplomats seem to be an endangered species, as seven officials have been found dead under mysterious or unexplained circumstances just since Election Day, and — although any link remains as yet unprovable — the deaths certainly provoke a number of questions.

First is the perplexing case of Sergei Krivov — disputably a consular duty commander at the Russian Consulate in Manhattan — died on November 8, Election Day, under perhaps the most problematic circumstances of any of the deaths listed.
SPECIAL: How To Fix Your Fatigue (Do This Every Day)
Found unconscious and unresponsive on the floor inside the consulate, Krivov suffered blunt force trauma to the head — initially reported as received in a fall from the roof of the building — and passed away before emergency services could reach the scene.
Consular officials quickly backtracked that Krivov died after plunging over the building, instead insisting he’d suffered a heart attack — but the diplomat’s lack of a paper trail, and ambiguity from officials about his career position, make the death appear to be far from ordinary.
“That position is no ordinary security guard,” reported BuzzFeed on Krivov’s ambiguous role at the consulate. “According to other public Russian-language descriptions of the duty commander position, Krivov would have been in charge of, among other things, ‘prevention of sabotage’ and suppression of ‘attempts of secret intrusion’ into the consulate.
“In other words, it was Krivov’s job to make sure US intelligence agencies didn’t have ears in the building.”

On December 19, Russian Ambassador to Turkey, Andrey Karlov, met his fate while giving a speech at an art exhibit in Ankara, when Mevlüt Mert Altıntaş — an off-duty Turkish riot police officer — fired several shots from behind, fatally wounding the diplomat and injuring several others.
Altıntaş proceeded to declare jihad and implored the terrified, small crowd of attendees and press, “Do not forget Aleppo, do not forget Syria!”
It was later revealed Altıntaş had used his law enforcement identification to enter the gallery; but at the time, Russian President Vladimir Putin railed against the attacker, thin security allowing him to enter the exhibit, “Russia Through Turks’ Eyes,” without issue, and the possible implications for resolving the conflict in Syria, stating,

This murder is clearly a provocation aimed at undermining the improvement and normalization of Russian-Turkish relations, as well as undermining the peace process in Syria promoted by Russia, Turkey, Iran and other countries interested in settling the conflict in Syria.

At some point on the same day — and prior to the brazen assassination of Karlov — Petr Polshikov, a senior diplomat in the Latin America division at the Russian foreign ministry, died in his Moscow apartment of a gunshot wound to the head. An announcement of the suspicious death did not become public until a few hours after Altıntaş shocked the world in Ankara.
Detailed information on Polshikov’s untimely demise remains difficult to obtain, but reports at the time alleged authorities found two bullet shells on the scene and a firearm under a sink in the bathroom.

Ex-KGB chief, Oleg Erovinkin — believed to have assisted former British spy, Christopher Steele, with a lurid dossier alleging explicit acts by President Donald Trump — was found dead in his black Lexus on December 29.
Erovinkin had been close to Igor Sechin, a former deputy prime minister and now head of State-owned oil company, Rosneft, and had acted as a key liaison between Sechin and Putin.
Although validity of the contents of that dossier have been called into serious question, Erovinkin’s alleged involvement in compiling the information makes his death dubious by nature. An investigation is ongoing.

Despite living alone on a tightly-guarded street, Andrey Malanin — head of the consular section at Russia’s embassy in Athens — was “found on the floor of his bedroom by a member of the embassy’s staff with no evidence of a break-in, the official said on condition of anonymity,” Reuters reported January 9.
Authorities also told Reuters there were no indications Malanin had been murdered, but homicide officials are investigating the death due to his status as a diplomat.

On January 26, Russian ambassador to India, 67-year-old Aleksandr Kadakin — who had served in the position since 2009 and spent over two decades as a diplomat — died in New Delhi, ostensibly from heart failure.
Although it appeared the man’s death was unrelated to the others and had been natural, the timing in conjunction with Karlov, Polshikov, Erovinkin, and Malanin raised some eyebrows.

Then, last week, Russian ambassador to the United Nations, Vitaly Churkin, died one day before his 65th birthday in New York City — reportedly of a heart failure.
According to the New York Times on February 20, “The Russian government said he died suddenly but did not specify a cause. The New York City police said there were no indications of foul play.”
However, Pravda reported, “According to ABS-CBN, a post-mortem examination of Churkin’s body showed the presence of poison in his kidneys. Allegedly, the diplomat had had late supper, at around midnight, hours before his death. Perpetrators could have added an unknown substance in his food.”
Churkin had been a vocal critic of hypocritical Western foreign policy, particularly concerning military actions in Syria.
An obituary in the Guardian stated Churkin “hated the moralising tone of his US, British and French counterparts on the UN security council who, he felt, were not only hypocritical but were playing to the global gallery and aiming to score rhetorical points instead of looking for compromises that could lead to the resolution of differences. This applied particularly to the war in Syria, about which western governments tabled resolutions that could lead, in the Russian view, to full-scale military intervention against the Syrian government and which they knew Churkin was bound to veto. Russia preferred to produce resolutions that criticised the Syrian army for using ‘disproportionate’ force and sought agreement on ceasefires. Churkin consulted the security council’s five permanent members on these resolutions, but chose not to provoke vetoes when he realised there was no consensus.”
What, if anything, this growing Russian diplomat body count actually means might never be fully known, but many suspect the deaths evince a methodical, covert war between the Deep State and Russia — particularly as hostilities continue mostly unabated — as a shift in power away from the ailing imperialist U.S. empire gathers speed.
Claire Bernish writes for TheFreeThoughtProject.com, where this article first appeared.


Thanks to Claire and: http://www.activistpost.com