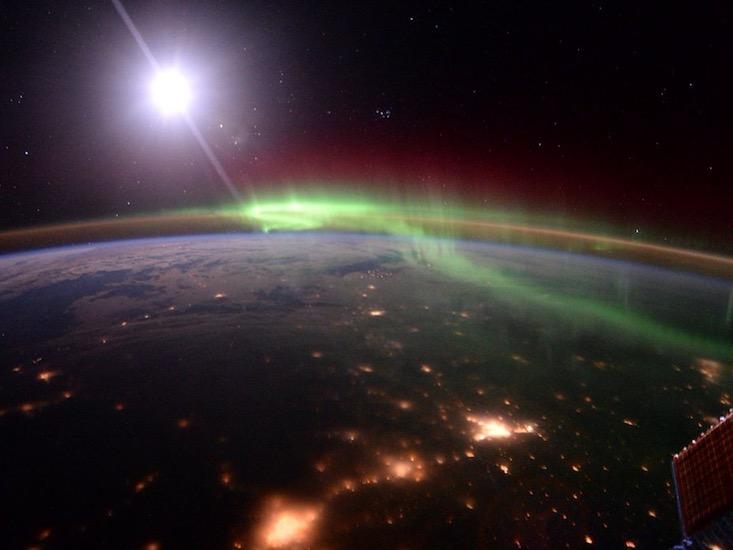 Think of life as analogous to a fire | Photograph by NASA
Can a planet be alive? Lynn Margulis, a giant of late 20th-century biology, who had an incandescent intellect that veered toward the unorthodox, thought so. She and chemist James Lovelock together theorized that life must be a planet-altering phenomenon and the distinction between the “living” and “nonliving” parts of Earth is not as clear-cut as we think. Many members of the scientific community derided their theory, called the Gaia hypothesis, as pseudoscience, and questioned their scientific integrity. But now Margulis and Lovelock may have their revenge. Recent scientific discoveries are giving us reason to take this hypothesis more seriously. At its core is an insight about the relationship between planets and life that has changed our understanding of both, and is shaping how we look for life on other worlds.
Studying Earth’s global biosphere together, Margulis and Lovelock realized that it has some of the properties of a life form. It seems to display “homeostasis,” or self‐regulation. Many of Earth’s life‐sustaining qualities exhibit remarkable stability. The temperature range of the climate; the oxygen content of the atmosphere; the pH, chemistry, and salinity of the ocean—all these are biologically mediated. All have, for hundreds of millions of years, stayed within a range where life can thrive. Lovelock and Margulis surmised that the totality of life is interacting with its environments in ways that regulate these global qualities. They recognized that Earth is, in a sense, a living organism. Lovelock named this creature Gaia.

Life and Earth have been co-evolving in a continuing dance.

Life itself, once it gets started, can make or keep a planet habitable.

Life is something that happens not on a planet, but to a planet.

A “living worlds” perspective implies that after billions of years, life will either be absent from a planet or, as on Earth, have thoroughly taken over and become an integral part of all global processes. Signs of life will be everywhere. Once life has taken hold of a planet, once it has become a planetary‐scale entity (a global organism, if you will), it may be very hard to kill. Certainly life has seen Earth through many huge changes, some quite traumatic. Life here is remarkably robust and persistent. It seems to have a kind of immortality. Call it quasi‐immortality, because the planet won’t be around forever, and it may not be habitable for its entire lifetime. Individuals are here for but an instant. Whole species come and go, usually in timescales barely long enough to get the planet’s attention. Yet life as a whole persists. This gives us a different way to think about ourselves. The scientific revolution has revealed us, as individuals, to be incredibly tiny and ephemeral, and our entire existence, not just as individuals but even as a species, to be brief and insubstantial against the larger temporal backdrop of cosmic evolution. If, however, we choose to identify with the biosphere, then we, Gaia, have been here for quite some time, for perhaps 3 billion years in a universe that seems to be about 13 billion years old. We’ve been alive for a quarter of all time. That’s something.
The origin of life on Earth was not just the beginning of the evolution of species, the fount of diversity that eventually begat algae blooms, aspen groves, barrier reefs, walrus huddles, and gorilla troops. From a planetary evolution perspective, this development was a major branching point that opened up a gateway to a fundamentally different future. Then, when life went global, and went deep, planet Earth headed irreversibly down the path not taken by its siblings.
Now, very recently, out of this biologically altered Earth, another kind of change has suddenly emerged and is rewriting the rules of planetary evolution. On the nightside of Earth, the lights are switching on, indicating that something new is happening and someone new is home. Has another gateway opened? Could the planet be at a new branching point?
The view from space sheds light on the multitude of rapid changes inscribed on our planet by our industrial society. The orbital technology enabling this observation is itself one of the strange and striking aspects of the transition now gripping Earth. If up to now the defining characteristic of Earth has been planetary‐scale life, then what about these planetary‐scale lights? Might this spreading, luminous net be part of a new defining characteristic?
David Grinspoon is a senior scientist at the Planetary Science Institute. In 2013, he was appointed as the inaugural chair of astrobiology at the U.S. Library of Congress. His latest book, Earth in Human Hands, was published in December. Also a musician, he plays guitar for the House Band of the Universe. Follow him on Twitter @DrFunkySpoon.