Mercury in Compact Fluorescent Lights is Contaminating Homes and Environment

Mercury in Compact Fluorescent Lights is Contaminating Homes and Environment Sat Mar 11, 2017 12:25 am 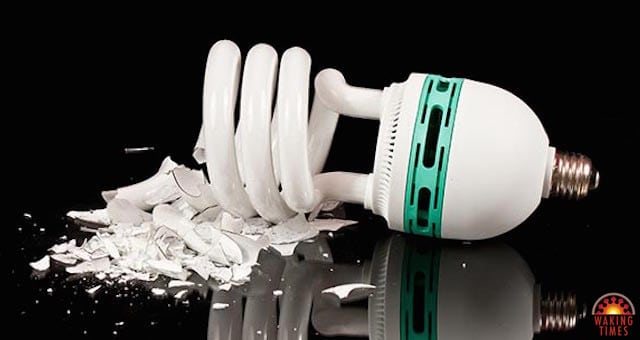 Pedro Aquila, Staff Writer
Waking Times
Compact fluorescent bulbs (CFL’s) are contaminating homes and the environment with mercury. They contain much higher amounts of mercury than other typical factors in the poisoning of people, often with many milligrams of mercury, whereas other factors in mercury poisoning are usually measured in micrograms. Thousands of times more than other typical mercury contaminants.
The damage done to people and the environment by mercury is well documented in papers found at sites like PubMed. According to a paper titled: “Current approaches of the management of mercury poisoning: need of the hour”:

“Mercury poisoning cases have been reported in many parts of the world, resulting in many deaths every year.”
“Humans exposure to mercury usually take place via eating mercury contaminated food, dental care procedures (using amalgams in endodontics) using mercury based, thermometers, and sphygmomanometer), occupational exposure (e.g. mining) and others (using fluorescent light bulbs and batteries)”


So how much mercury is in a CFL light bulb, compared to amalgam dental fillings or contaminated food?
Reading from the transcript of a documentary about big pharma:

“Mercury amalgams leak significant amounts of mercury vapor, an approximate 15 micrograms daily per filling.
Many people have multiple fillings, leaking up to 120 micrograms of mercury into the body every day. The vapor is swallowed with saliva and inhaled into the lungs. Agitating them with chewing or acidic foods can release more.
Mercury in seafood is a serious concern, and 1 microgram of mercury is enough to be concerned with that. 1 microgram of mercury per gram of fish exceeds the FDA standard.”

From that perspective, even micrograms of mercury are enough to cause long-lasting damage, and the light bulbs contain about 4 milligrams of mercury on average, thousands of times more mercury than is released regularly by mercury amalgam dental fillings, and possibly tens of thousands of times more mercury than eating contaminated seafood.
Micrograms of exposure to mercury make a difference over time, building up and eventually leading to serious symptoms, and mercury is one of the most difficult things to get out of your body, and one of nature’s most vicious neurotoxins.
Despite all of this, dismissive headlines can be found online such as “The Mercury Myth: How Much Mercury Do CFLs Actually Contain?” from Earth Techling.

The article features info from the very last people you’d want to trust: General Electric, a military industrial complex tied corporation that makes the lightbulbs and owns the History Channel.
Reading from the article:

“We consulted the EPA and contacted a lighting specialist from General Electric, which sponsors this magazine [Txchnologist], in order to take on the issue of mercury in CFLs.
Are we talking about high levels of mercury?
No. And the amount of mercury in CFLs has dropped steadily since they first made inroads into the market 15-20 years ago. As recently as 2007, CFLs contained about 5 milligrams, enough to cover a ballpoint pen tip.”

This is untrue. Milligrams of mercury are an enormous amount compared to the micrograms that build up and give people symptoms. Mercury vapor can be inhaled when the bulbs break, and the vapor can steadily build up in an enclosed area, possibly doing more damage than mercury dental fillings.
Thermometers used to contain much more mercury than they do now, however, it doesn’t men that a smaller amount of it any less harmful. This is fallaciously cited as a reason for why CFL’s are safe: “they don’t contain as much mercury as thermometers used to.”
The excuse was given by Sándor Lukács, a General Electric manager:

“To put it in perspective, when I was a little child, I had a thermometer that had 1,000 times more mercury than the current CFLs.”

General Electric has been involved with CFL bulbs since 1938, when George Inman partnered with GE to sell the first fluorescent lamp, and in 2016, General Electric said their CFL’s would be phased out in favor of LED lights.
It benefits people to know where everything comes from: every object and product in our home has an effect.

About the Author
Pedro Aquila is a staff writer for Waking Times.

» Teen Designs Compact Nuclear Reactor To Power Homes
» How did Ancient Indians Solidify Mercury at Room Temperature? Mystery of Mercury Lingam Revealed!
» Microplastics Are Now Contaminating Vegetables We Eat
» “Smart” homes turn STUPID as Google cloud craters, locking people out of their own homes and shutting off access to air conditioners
» PIPELINE: Dakota Tribe Says Government Is Contaminating Their Water to Get Them to Leave.