OUT OF MIND » THE INSANITY OF REALITY » GOVERNMENTS & THE NEW WORLD ORDER » Nancy Pelosi Arrested - September 2, 2012

This news was disclosed on Global Voice 2012 Radio on September 2, 2012.
I have edited this portion out of the original 3hour broadcast to get
this information to the people. It would be great to get confirmation
from those who can confirm if this is real news. We all know main
stream media is controlled so I don't expect them to report this news
right away. Apparently Rick Light and Drake will confirm with video and
pictures shortly. I will update on Facebook and the Blog site as soon
as I get additional information. 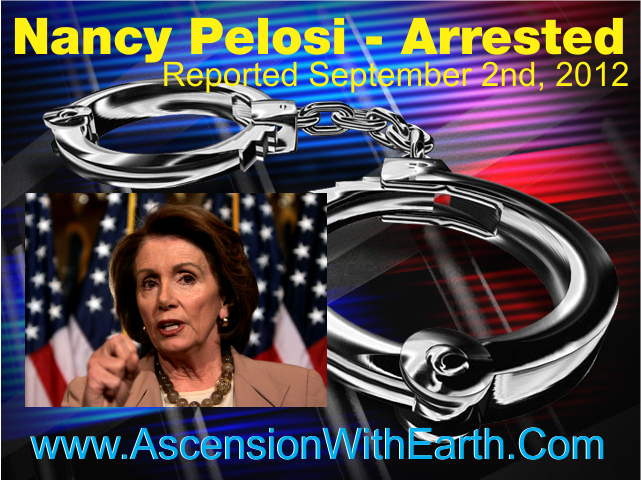 she is the Head Witch on the WESTCOAST

She is near Bohemian Grove

she is in the Napa Valley

the other head Witches and Warlocks

are all over the Nation

They map them out strategically to cover us in curses

I Glad that people are waking up ... the dark hates the light

Rumor: "Nancy Pelosi has been arrested."

still in the rumormill

but this is actually

Posts : 1315
Join date : 2012-01-01
WTH...this is a comment I found at the Nesara site where they had Drakes email alert posted...... AnonymousSeptember 3, 2012 5:51 PM"Reuters WASH DC: The DC Police Dept. has stated that Nancy Pelosi, Democratic Congresswoman from California and former Speaker of the House of Representatives, has been arrested and charged with felony battery when she allegedly struck John Boehner, Republican Congressman and current Speaker of the House, during an altercation between the two. Sources claim the incident started when Pelosi refused to forward the traditional gavel to Boehner, who has made several requests for her to do so since his ascension to the role of Speaker of the House on January 5, 2011.
In an unconfirmed account of the events, Boehner in a heated disposition went to Pelosi's office and demanded the gavel be presented to him immediately. When she refused, he attempted to take it, but she grabbed it first and struck him in the head.
Doctors say Boehner will be fine, however, they cannot determine at this point if there will be any scarring on the scalp.

Pelosi's attorney stated they will plead "not guilty" at the first opportunity to do so, claiming Boehner was aggressive and threatening in nature when the incident occurred.


i would have thumped both their melons

THIS BEHAVIOR .....is ridiculous.....and if a child had done this in a Texans SCHOOL

I think we stand back and allow the dark ones to destroy each other. Should be an entertaining show!

OUT OF MIND » THE INSANITY OF REALITY » GOVERNMENTS & THE NEW WORLD ORDER » Nancy Pelosi Arrested - September 2, 2012