Liberation of the Mind 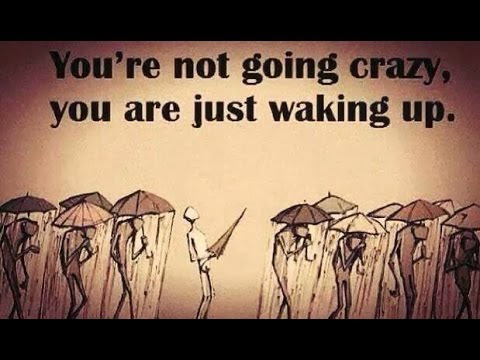 All that is familiar, to the prisoner, is the prison. The prison is of the mind through belief in expectations, conformity and the atrophy of creativity and free-will.

There is a muffling of the sound as there was another 40-70 mph wind storm and I had to treat the audio was well as use a makeshift wind-sock which ended up transferring a lot of bass to the recording. The next recording is even worse but the information is that much more relative. There is always an exchange...I will work to ensure that the recordings are clearer, thank you.


A Society Ruled By Their Complacency With Illusion

The system results in people losing their sense of self, creativity, and knowledge of the world and the universe and essentially becoming willing mind-slaves to a technologically defined reality.

The virtual reality realm is monitored by “System Operators” who observe everyone’s experiences and ensures that everything runs within parameters to maintain continuity.

The environment of the real world has been destroyed by nuclear war. The virtual environment is created to avoid this reality and live within a comfortable existence, however this produces the undesirable experience for those who seek something more, true reality and true expression of self in a genuine society.


A Common Theme and Message

Many movies or stories throughout history mirror this theme and the message is that there could be a disaster that occurs and changes reality forever.
A second look at this could bring up the notion that this disaster has already occurred and we are in that time right now and this could be analyzed in a variety of ways. The universe itself could be the simulation, where as a genuine and direct experience of life would be inconceivably vast to the point of being incomprehensible. Or one could theorize that there is a kind of local-environment simulation system that is based on the previous occurrences of history and we are viewing the ancient past from a society that has already experienced such a disaster.
One could also come to theorize that this ‘disaster’ does not necessarily have to be nuclear, or a disaster at all. Eventually, if technology is advanced enough, if all the problems of disease, biological misalignment, war, economic difficulty etc etc etc are all removed then we would ultimately find ourselves in either a world where anything can happen, or a world where everything has happened and leaves us with nothing left to explore.

Thusly, the only option left would be to return to where we came from and re-explore the values and principles that brought us to that null point. Regardless of any disaster, once any civilization is advanced enough, this kind of diminishing returns of progression could be reached and then people would eventually resort to these kinds of simulated realities in order to technologically recreate those catalysts of progress through those difficulties that could be find in a world just like this. Thus, this world could be that simulated world, however this is just a theory and there are multiple ways of interpreting this including that the universe itself is the simulation. In the case of the universal simulator idea of the virtual reality becomes something of a necessity to have a temporally linear, physical experience in the first place.


The Split Between Races

Some people choose to move underground and become mutated, cannibals from the radiation poisoning.
Others stay above ground and refuse to eat human flesh yet they fight to survive and the numbers are reduced dramatically.


The Act of Destruction

Those who came before poisoned the sky and the land and then moved into the small contained cities where the simulated realities are managed.


The Parallels With This Reality

All that can be said here is that there are some explanations of what is referred to as “Mars” but could very well be another location in time where these events could have occurred and resulted in a mutation of the original inhabitants to beings who did not look like humans. There is another explanation regarding that which is that they were human but utilized genetic systems, bodies of another order in order to travel from the Martian environment to Earth. As well, cannibalism could relate to the disaster and ruined resources or simply a biology and society that functions differently.

Notice how in any good storyline there is a synchronization of events across multiple layers. This is to reflect the nature of the universe to correspond across multiple times, planes, or storylines. The characters and observers experience this as synchronicity and this seems too good to be true in terms of how the movies generally play out but in the overall story of the universe this is actually how events progress. This is because the next layer of development can only come about once there is a suitable level of readiness for the other layers and the layers to come. This is like a domino effect of alignment and progression and becomes more apparent the more one is observant of this quality of time and consciousness. Ultimately, time is consciousness.

The choices one makes correlates them to certain frequency ranges which align with the next level of progression. So the synchronization effect is dependent on the initiation of one’s own development through applying their will-power to overcome obstacles and increase self-awareness.

Humans Are Mapped Out; There is a Blueprint For Existence

Humans are not meant to live as animals. All linear time is projected and mapped out by a creator. Humans are meant to live according to a plan that allows them to express and grow in divinity. Degradation of their nature is the diversion from this plan and that is what disconnects one from the blueprint, the soul and the source.
In the movie the ‘underworlders’ are degraded cannibals. An exiled “Inworlder” or “dreamer” from the techno-society comes to the underworld and teaches them seemingly barbaric rituals which do not curb the degradation but they give order to the morbid, cannibalistic instinctual chaos that is the norm of that society.

(After ripping a womans eye out and throwing her into a giant, body-sized grinder machine produce a slurry that is first drunk by the leader (Captor) and then the rest of the people in a crude ritual)

Captor: I convinced them that I could change their world, save them. Oddly enough, I have.

Captive Woman: Saved them how?

My little show must look tawdry to you after Infinisynth, but these rituals are all these people have to look forward to.

Captive Woman: I wish I hadn’t found you, I wish you’d been dead.

Captive Woman: Believe me, I’ve wanted to die countless times. Down here death can be a blessing, but I’ve denied myself the pleasure.

Captor: Why did you leave Inworld?

Captor: But we’re different, aren’t we? We wanted life.

Captive Woman: This is hell.

Captor: No, hell is for the death. But here, it’s life. Look around you.

These people would never believe in a God of love, a God of light. Yet, I’ve given them a reason to live.

Captor: Dreadful though it is, I’ve given them a structure.

A religion, hope. They’re blind, and I see for them. They’ve survived. I’m sorry you don’t see it as I do. They’d been living in the landfill for some time before I came, but they’ve forgotten what any of this was for. I’ve helped them to remember, to use it as a foundation for the future. Now they have a purpose with each new day.

An enigmatic perspective on virtual reality, post-apocalyptic, occultic, simulated life. They tell the stories that the public can’t yet understood through direct-disclosure, through the media as soft-disclosure.