Strong Evidence Shows Extraterrestrials Have Been Shutting Down Nuclear Missiles Worldwide For Decades, But Why?

Strong Evidence Shows Extraterrestrials Have Been Shutting Down Nuclear Missiles Worldwide For Decades, But Why? Mon Mar 20, 2017 5:04 pm 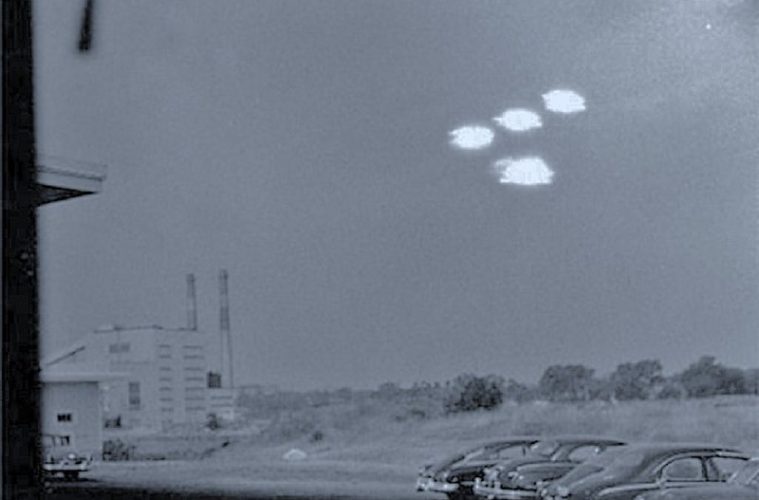 The photo you see above is a real picture taken in August of 1952, it’s a photograph of multiple UFOs taken by the Coast Guard photographer at the time above a US military installation, a common place for UFO sightings.  The photo was classified by the US government, and then later approved for release. It was witnessed by multiple ‘professional’ people.(source)(source)
advertisement - learn more

There is no shortage of pictures and videos when it comes to UFOs, here’s another ‘official’ example you can read about from the Canadian military.
“It seems to me that the Bentwaters incident is a classic case where an apparent intrusion into our airspace and indeed a landing in our country was witnessed by serious minded people in the military, responsible people doing a responsible job…Bentwaters is in a sense,  a benchmark of how not to deal with these matters in the future…I know a good bit about the bentwaters incident…There are only two explanations for what happened that night…The first is that what the people concerned…they claimed that something from outside the Earth’s atmosphere landed at their Air Force base, they went and stood by it, they inspected it, they photographed it, the following day they took tests on the ground where it had been and found radioactive traces. They reported this…and sent it to our ministry of defense.”
The quote above comes from Lord Admiral Hill-Norton, Former Chief of Defence Staff, 5 Star Admiral of the Royal Navy, and Chairman of the NATO military committee regarding what’s known as the Bentwaters incident. It’s an incident that took place in Rendlesham Forest, and remains a very important event and one of the most controversial UFO cases ever – because it’s supported by military testimony as well as military documentation. The area houses nuclear weapons, a fact that was denied for years by authorities, but then admitted to be true.
Norton is one of several hundred (and more than 1000 worldwide) military witnesses coming forward to testify to the reality of extraterrestrial visitation. He later went on to say that:
“There are objects in our atmosphere which are technically miles in advance of anything we can deploy, that we have no means of stopping them coming here … [and] that there is a serious possibility that we are being visited and have been visited for many years by people from outer space, from other civilizations. That it behooves us, in case some of these people in the future or now should turn hostile, to find out who they are, where they come from, and what they want. This should be the subject of rigorous scientific investigation and not the subject of ‘rubishing’ by tabloid newspapers.”
advertisement - learn more

The incident at Bentwaters, according to the UK ministry of defence, was described as having “no defence significance.” This didn’t make much sense – how can you tell people that after a Colonel of a nuclear weapons facility and his many men either experienced what they experienced, or all suffered a giant hallucination together, is of no defence significance? Doesn’t make sense, does it?
There are examples from all over the world. The same thing has been happening in Russia, with even Wikileaks articles titled, “Unidentified Flying Objects Over Algeria,” providing details regarding the Secretary General of  The Ministry of Defense, Colonel Abdelhamid Latrech, and his interest in “strange machines which had been maneuvering over Algerian airspace in recent weeks.”
The document outlines how these strange objects had “been seen near military installations by responsible people.” The “responsible people” list is blocked out and states “Limited Official Use,” because the people in question are military personnel. Hundreds of these people have come forward publicly, however, and here is one example.
Professor Robert Jacobs (first officer ever awarded with the Air Force guided missile insignia), who was the officer in charge of optical instrumentation at Vandernburg Air Force Base, was responsible for supervising the instrumentation photography of every missile that went down the test range. In those days, the nuclear missiles were called “inter country ballistic missiles” (ICBM’s) because most of them blew up on launch. Their job was also to provide data on why they blew up, so they could provide the engineers good enough engineering sequential photography so that they could see what was wrong with the missile as it took off in flight.
“What we photographed up there affected me for the rest of my life, and made a huge impact on my understanding of the universe, and of, governmental manipulation of our minds.” (source)
In the video below you can also see a recreation of the event.
https://youtu.be/273jcsMQu3M
Another incident occurred at Malmstrom Air Force Base in Montana, and is one of the most remarkable events in this history of UFO encounters with the military. This occurred in March of 1967 at a base that was responsible for a large amount of nuclear weapons. Witnesses here saw a red, glowing UFO hovering just outside the front gate. After that happened, all of the nuclear missiles shut down, and went completely dead.

Below is a clip of Captain Robert Salas, one of the men involved in the incident, giving his testimony at the Citizens Hearing on Disclosure that took place a few years ago, where a number of academics, politicians, and ex-military gathered in front of several congresspeople to discuss the matter and what happened there.


So, Why Is This Happening?

There are many theories out there. When military witnesses gathered at the national press club in 2010, the feeling among them was that these UFOs and whoever they are operated by, are sending a message that we are “playing with fire.” But testimony from another high ranking officer who spent his life working in and around nuclear weapons and nuclear weapons facilities offers up a different explanation based on the information he’s been privy to.

His name is Colonel Ross Dedrickson, and he said that he and his team constantly received “reports of  visits by UFOs over the storage facilities and even some of the manufacturing facilities, and that went on continuously.” He went on to say that they “found that the reports were few and far between, but the security people were reluctant to report many of them because the protocol and the bureaucracy  involved in reporting them, they just avoided reporting.”

After stating the above, he goes on to use the Vandenburg incident (mentioned earlier in the article) as an example, where they photographed the missile and the UFO as the missile climbed into space.

He goes on to state:

“And that is their (extraterrestrials) major concern, to preserve the integrity of the Earth because it affects their own system…There was one incident when we exploded a nuclear weapon over the pacific…and the disturbance that it caused because it shut out communications entirely over the pacific base for a number of hours in which no radio transmission was available at any time…This was one of the things that the extraterrestrials later I learned were highly concerned about because it affected our ionosphere and, in fact, space-craft were unable to operate because of the pollution in the magnetic field, which they depended upon. At the very end of the 70s and early 80s, we attempted to put a nuclear weapon on the moon and explode it for scientific measurements and other things (assess scientific data, reaction and so forth..), which was not acceptable to the extraterrestrials…They destroyed the weapon before it got to the moon….The idea of any explosion in space by any Earth government was not acceptable to the extraterrestrials, and that has been demonstrated by extraterrestrials over and over.”

Watch the full interview where these quotes were taken, HERE.

So, from all of this information we have a few theories. Extraterrestrials are warning us to stop playing with fire and building nuclear weapons, that it’s not in our best interest and we should stop. Secondly, a nuclear explosion is huge, and the energy travels far beyond the physical blast radius and not only affects our solar system, but others as well. Also, as mentioned above, nuclear explosions pollute the magnetic field, something that they rely on to operate their craft.

One things for certain, the deactivation of these weapons, along with our willingness to not use our intelligence to create deadly weapons is a must if the human race wants to move forward. Human consciousness is changing, and it is us who must be that change. It is the person working to develop these weapons, seeing through the lies of the justification of making these weapons, and more.

Humanity must wake up, and realize that this is a big no no, and, year after year we get closer and closer to more people having that realization.

Definitely some interesting things to think about. What are your thoughts?

Related CE article: What Happens When A UFO is tracked on Military Radar?

If you’d like to read/browse through our UFO/extraterrestrial article archive, please visit the exopolitics sections of our website HERE.


To learn more specifically about UFOs and nuclear weapons, we recommend checking out the work of long time researcher on the matter, Robert Hastings.

You can see some more declassified documents pertaining to this matter, here.