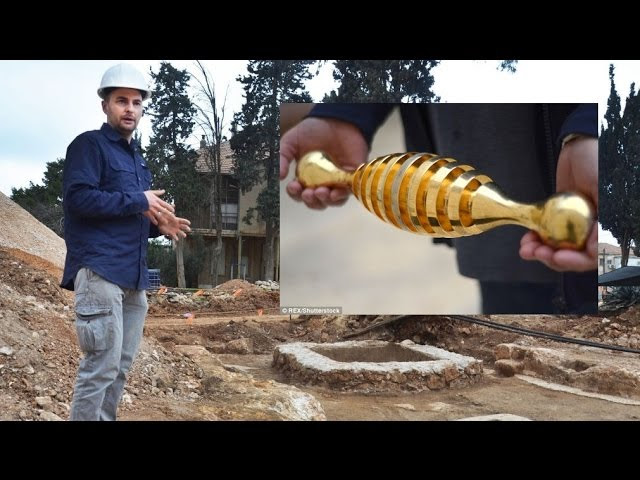 Published on Mar 21, 2017
Archaeologists have been unable to determine the use or purpose of an 8.5 kilogram gold tool discovered in a Jerusalem cemetery.
Source:http://www.jpost.com​

When a cemetery worker stumbled upon a weird object in an ancient building, he was rightfully suspicious. Israel has an ongoing crisis with terrorism, so the authorities were summoned and they set off a controlled explosion at the site. Sifting through the rubble, they uncovered a gold-plated object weighing 8½ pounds / nearly 4 kg, and about the length of an adult's forearm. Stumped, they handed it off to the Israel Antiquities Authority, in hopes of crowdsourcing the artifact's identity.
Turns out an Italian named Micah Barak recognized it as an Isis Beamer. This is one of the many bio-energy innovations sold by a German company called Weber. Nobody has come forward to reclaim their Isis Beamer, nor are there any suspects at this time. A shame, since an Isis Beamer can do a lot of good. Check out the wild product description from their website.

The Isis Beamers are active around the clock. They can create a protective field of the type generated by spirit energies or meditation. However, such a field needs constant renewal. The advantage of the Isis Beamers is that it seems like their energy is emitted constantly.
Before I had completed the first Isis Beamer and had it ready to wear as a pendant, I had meditated for a long time. After the Isis Orgone Beamer, I wanted to be able to offer a small portable device. The right inspiration arose from a crop circle motif. This was the shape I wanted to combine with the grooves. Then I added Sacred Geometry.
Sacred Geometry describes what is behind physical existence. Crystals, metals and organic cells can all be derived from particular geometric bodies. Within physical existence, everything in existence is based on just five bodies which are also called platonic bodies.
Based on the measurement of the cosmic key, 7.23 cm (2.85"), the form of the Isis beamer devised itself almost on its accord. This is also the form you will encounter in connection with some of the ancient Egyptian headdresses. The pharaos used wear one half of an Isis Beamer as a crown, so to speak, and it enabled them to receive supreme inspiration.(Fig.3 right side)
I started out by distributing some prototypes of the Isis Beamer to various people, and the feedback I received was consistently positive: People reported that the Isis Beamer strengthened the body's own energy field and open the mind for new insights. Exactly this was what I had wanted to achieve!
Nevertheless, I am unable to provide any 'hard' scientific proof for its functioning. On the other hand, approximately 25,000 Isis Beamers have been sold in the meantime, and I would say that this happened because they deliver the results that their shape encourages us to expect. In addition, there is a 7-page test survey issued by the Hagalis Institute which states that the Isis Beamer is able to provide a protective shield against the influence of emissions from mobile phones.

All this, and more, for the low, low price of €210.60 / $230.66 USD / $319 AUD, plus shipping.
Even if your 5 dimensional chakras are completely harmonized, it makes a dandy paperweight, or out-of-place artifact to prank your gullible friends.
Bookmark/Search this post with