OUT OF MIND » THE INSANITY OF REALITY » POISON PLANET » Monsanto Is Scrambling To Bury This Breaking Story – Don’t Let This Go Unshared!

Monsanto Is Scrambling To Bury This Breaking Story – Don’t Let This Go Unshared! 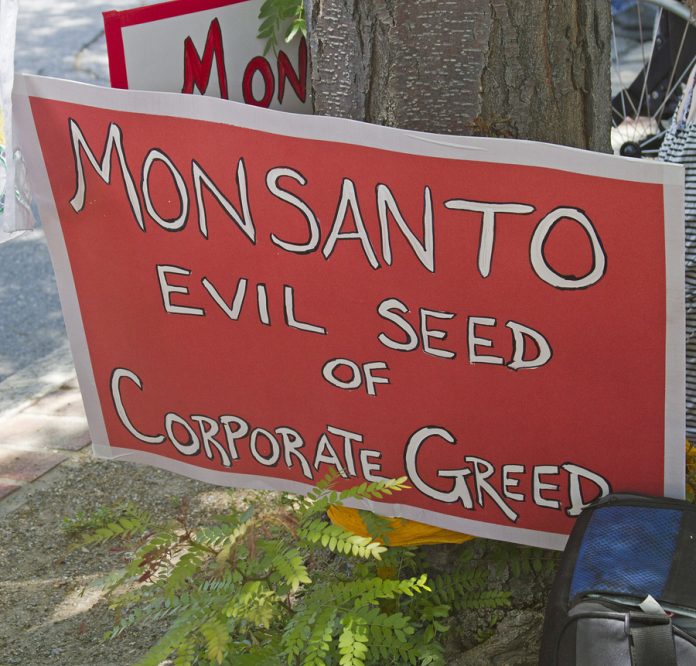 PLEASE SHARE this with all your friends! We mustn’t keep quiet about the evils about Monsanto!

I am frankly shocked this information is not making front page news right now. Monsanto will do anything to bury this story… and as of right now, it’s working. Not a single mainstream media outlet has covered this appalling new report that shows millions of people being poisoned by a chemical that does not belong in our food. This chemical is ending up in processed foods like Cheerios, Ritz Crackers, and Oreos and being consumed by humans across the world. The health of millions of people is on the line and this news must go mainstream! That’s why I’m calling on every single one of you who reads this post to share this breaking story now. The only way this injustice will be corrected is if enough of us stand up and demand that something be done to stop the poisoning of our food supply.
RELATED ARTICLES:

Share this shocking new report with everyone you know….

A FDA-registered food safety laboratory tested iconic American food for residues of the weed killer glyphosate (aka Monsanto’s Roundup) and found ALARMING amounts.
Just to give you an idea of how outrageous these amounts are, independent research shows that probable harm to human health begins at really low levels of exposure – at only 0.1 ppb of glyphosate. Many foods were found to have over 1,000 times this amount! Well above what regulators throughout the world consider “safe”. {See the test results and full report by Food Democracy Now! and The Detox Project}.


Here is why we all should be concerned about eating glyphosate:

Why is this weed killer in these foods? Even non-GMO and organic food!

This chemical has gone so mainstream that glyphosate has infiltrated every facet of our environment – our water, air, soil.

So, that is why it’s not just GMO-filled junk food that is laced with glyphosate. It’s contaminating organic and non-GMO foods, and it’s even in our honey! The FDA quietly found it in almost every single sample of honey that they tested (from mass produced to organic mountain honey). The media has been essentially silent and barely anyone heard this news!
Even if you don’t personally eat the specific brands that were tested (I don’t), how many people are eating Cheerios and Ritz Crackers every day? A lot!


How many of your friends and family have their cabinets filled with these foods? These people need to know this information.

There are still thousands of other brands and whole foods that have not been tested for glyphosate residues, so we can’t be so sure that our own organic, non-GMO, and unprocessed food is safe. Americans are effectively being forced to eat this poison until something is done to stop the rampant use of this chemical. Yes, I said poison.


Monsanto doesn’t want the public to know these findings for obvious reasons. They have our regulatory agencies in their back pocket to make sure they can continue to make a hefty profit while poisoning the masses.

While there are now several manufacturers of glyphosate herbicides, Monsanto completely dominates the market and this is a best seller. They are raking in BILLIONS every year and certainly don’t want that to stop. They are clearly, without a doubt, using their prosperity to influence our government regulators. Why else would those entrusted to protect the public from harmful chemicals turn a blind eye to this?


Our public agencies are allowing corporations to poison Americans for profit.

In 2013, the EPA massively increased the industry standard of what is considered a “safe” level of glyphosate on our food, in order to make enormous amounts seem A-OK. Instead of properly regulating, they effectively raised the “safe” level so that no one can blame the industry for poisoning us with unlawful amounts of chemicals. This is corruption at its finest. The EPA has a long and sordid history of doing whatever Monsanto wants and you have to ask yourself why this continues to happen and how we can make it stop.
The EPA continues to pander to Monsanto, as they keep postponing and dragging their feet to evaluate glyphosate’s link to cancer in humans. The industry is fighting tooth and nail to make sure that the EPA “evaluation” will be in their favor and is trying to control who will be on the panel. Why won’t the EPA do their job to make sure that the world’s most widely used herbicide isn’t causing us all to get cancer? Don’t you think this should be a top priority? It’s time for the EPA to put the public health above the corrupt desires of corporations.
When it comes to the FDA, they are not protecting the American public from glyphosate either. After announcing in February that they would FINALLY begin testing foods for glyphosate residues, they just decided to suspend their testing this week. Could it be that Monsanto didn’t like the results they started getting – especially since the FDA found glyphosate in foods that should be especially safe like BABY FOOD? Monsanto will do whatever it takes to keep that story out of the public eye.


Doesn’t the public deserve to know this information? It should be shouted from the rooftops!

It is shameful that the American media has thus far failed to cover this breaking news, but WE HAVE THE POWER to make this information go viral. If you really want to stop the corruption perpetuated by Monsanto and the large chemical companies – this is how we shut them down!

Remember the best way to avoid glyphosate is by choosing certified organic foods because it is prohibited on organic crops. Although contamination is a real threat, the levels on organic foods are minimal compared to what’s been found on conventional foods. It’s been shown that people who eat organic foods have less glyphosate and other synthetic pesticides in their system.
The people of this country must be informed and this should be our top priority. Go, Food Babe Army, Go!
*Article originally appeared at Alternative Media Syndicate.

OUT OF MIND » THE INSANITY OF REALITY » POISON PLANET » Monsanto Is Scrambling To Bury This Breaking Story – Don’t Let This Go Unshared!