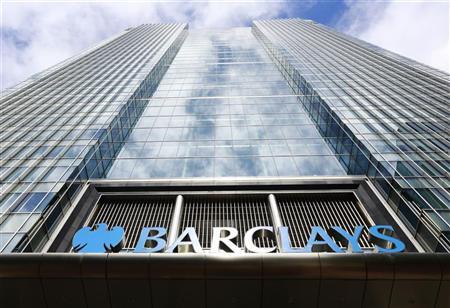 (Reuters) - The fallout from an investigation into the attempted
manipulation of global benchmark interest rates has again rocked
Barclays Plc, as the bank recently ousted a top executive and a trader
in New York for their roles in the scandal, according to regulatory
filings obtained on Tuesday.

Barclays formally notified the
Financial Industry Regulatory Authority on August 29 that the executive,
Ritankar "Ronti" Pal, was "discharged" on July 30 because the bank had a
"loss of confidence" in him as a manager for failing "to properly
supervise individuals on his team", one of the filings stated. His
departure had been previously reported but no explanation had been
given.

Pal, 42, had been a managing
director at the bank and for the past six years was the head of U.S.
interest rates trading in New York. At least four former Barclays
traders who worked under Pal in New York have drawn scrutiny from U.S.
prosecutors and regulators in the investigation into the manipulation of
the London interbank offered rate and related benchmark interest rates,
according to people familiar with the probe.


Barclays
ousted Pal, who could not be reached for comment, a month after the
bank paid a $450 million fine to reach a settlement with U.S. and
British authorities in the interest rate rigging probe.

On
July 30, Barclays also terminated Dong (Don) Kun Lee, a New York-based
derivatives trader who reported to Pal, for allegedly engaging "in
communications involving inappropriate requests relating to Libor." Lee
could not be reached for comment.

The regulatory filings disclosing the reasons for the two departures are not normally made public and were provided by a source.

Barclays
did not specifically comment on the terminations of Pal and Lee. But
said in a statement that "the firm undertook a thorough and robust
internal disciplinary process promptly following the regulatory review
which was completed in late July."

The
dismissals reveal that even after settling with authorities, the full
extent of Barclays' role in the rate-rigging scheme is still playing
out.

The regulatory filing on Pal also alleged he "engaged in a communication involving an inappropriate request relating to Libor."

The
investigation involving the group of former Barclays traders in New
York is focusing on an attempt by those traders to manipulate the
pricing of Libor to score a bigger profit on interest rate swaps trades.

U.S.
authorities, in settling with Barclays, alleged that traders in New
York would sometimes ask officials with the bank in London to either
submit high or low prices for Libor depending upon how it would benefit
their trading positions.

The
international investigation is looking at a number of big banks that
participate in the process of setting benchmark interest rates.
Authorities contend the attempted manipulation dates back to 2005, but
people familiar with the process have said Libor manipulation dates back
to the late 1990s.
Barclays is
the first big bank to settle with U.S. and British authorities, who are
investigating allegations of similar conduct by traders at other banks.

A spokeswoman for the Department of Justice in Washington, D.C. declined to comment.
Lawyers
familiar with the investigation say federal prosecutors continue to
reach out to individuals to gauge interest in cooperating or taking
pleas.

They said U.S. prosecutors
are expected to begin making decisions in early September about whether
to charge individual traders. The lawyers said authorities are furthest
along in their investigation with regards to the Barclays traders.

One
former Barclays employee also drawing scrutiny in the investigation is
Jay V. Merchant, who began working for Barclays in 1998 and remained
with the British bank until the end of 2009. Merchant worked for
Barclays in New York from 2006 to 2009 and was a top trader reporting to
Pal.
Two weeks ago, Merchant left
his position as head of swap trading at UBS, shortly after Reuters
reported that he had hired an attorney and his activities at Barclays
were being examined by investigators.

Reuters
previously has reported that Ryan Reich, another trader who was part of
Pal's team at Barclays, was fired by the bank in 2010 for sending
inappropriate emails about Libor.

I hope they all get what's coming to them, the dirty scoundrels- :twisted: