EXCLUSIVE: World is 'about to be told ALIENS EXIST and are HERE on EARTH'

GLOBAL governments are preparing the world for an imminent announcement that intelligent aliens exist and are already here on Earth, it has astonishingly been alleged.

The claim is made by lobby group The Disclosure Activists, a new international consortium trying to force the alleged truth about aliens out into the open.

Conspiracy theorists have claimed for years aliens have been visiting Earth and world leaders are aware, but it has been kept from the public under an alleged "truth embargo" amid fears of the impact it would have on religion and the rule of law. But now The Disclosure Activists claim and number of recent UFO file declassifications, means the lid is about to come off once and for all.

In a statement, the organisation said "the historical stance of widespread denial and misinformation has shifted". Group, co-founder Russell Calka: "Recently there is a systematic effort from within the US and other world governments to release this information to the public."

Victor Viggiani, the senior strategic adviser to organisation, added: "All of the evidence that has been accumulated by researchers, military witness testimony, and acquired from declassified government documents over the last 70 years points to three very basic conclusions — the planet Earth has been and is being engaged by off-world civilisations. 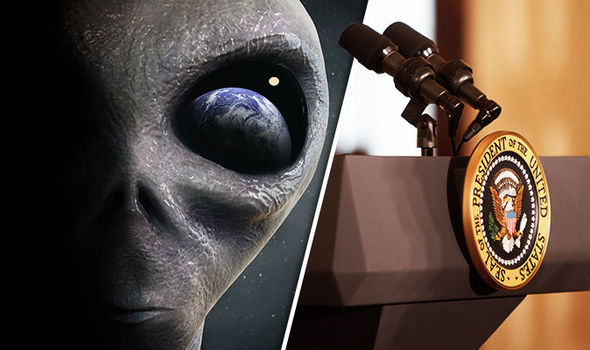 The Disclosure Activists claim we are aboutto receive big news about aliens.

"Secondly — this information has been hidden from the public in a well orchestrated and systematic embargo on the truth.

The statement added: "The Disclosure Activists contend that Disclosure is already underway. "Earlier this month, the Spanish Ministry of Defence released a cache of previously classified UFO documents, similar to documents released by the Central Intelligence Agency (CIA) in January 2017, and similar to other document releases from governments in the UK, Chile, and Mexico.

"NASA reported the discovery of additional habitable exoplanets (bringing the total to well over 3000) and just this month, former President George W Bush alluded to his knowledge of the UFO phenomenon in an interview on late night television with Jimmy Kimmel.

"There have also been email leaks, via Wikileaks, that indicate this topic is of substantial interest to government and military, as they prepare citizens for disclosure of extraterrestrial visitation." Group co-founder Dr Lisa Galarneau said: "Through these government disclosures, scientific discoveries of exoplanets, leaks, and hints from insiders, the public is being prepared for official announcements regarding extraterrestrial visitation. "This awareness building campaign is deliberate in its attempt to prepare humanity for formal Disclosure.

"This is an important step towards open contact with extraterrestrial intelligences who have not shown hostile intentions and could help humanity with some of our most intractable problems, including energy, climate change, pollution, and resource scarcity." he statement ended saying: "Disclosure is imminent.

"We are not alone in the cosmos and we never have been. Citizens have a need to know." Sceptics claim there is no truth embargo, because no aliens have ever visited Earth. They argue that if such a secret had been kept secret for so many years, particularly since the age of whistleblowing websites like Wikileaks began, that tangible evidence of aliens existing would have been leaked.