Trecenas are thirteen-day
periods in the Tzolkin. Each Trecena starts with the Number 1, but with a
different Day Glyph. As a wave of the Thirteen Heavens, the underlying
energy is governed by the First Day Glyph of the Trecena and influences
all thirteen successive Day Glyphs. Being aware of the predominant
energy of the First Day of the Trecena, we can align our intentions with
that energy and allow our goals to manifest.

In Mayan prophecy, the
god-king Feathered Serpent or Quetzalcoatl would return to humanity in
the year 1 Reed. According to the legend, as a spiritual leader
Quetzalcoatl advocated the replacement of human sacrifice with flowers,
songs and meditation. It was told that he erected a pillar in the city
of Tula “Place of Reeds” symbolizing the World Tree as an energy conduit
between heaven and earth.


Reed energy, like a pillar
receiving sunlight energy, serves as the connection between heaven and
earth. Thus Reed energy becomes a conduit of light energy,
photosynthesis on a spiritual level, our continual link through many
levels from the primordial cellular level to the higher vibration level
of multidimensional existence. This photosynthesis of energy
(“kundulini” running up and down our spine) brings out the best in us,
especially our passion for a concept we believe in. We may feel inclined
to begin a crusade for change, and many may gravitate to those born on
the Day of Reed because of their clear visions of changing the world for
the better.


Another representation of
the Trecena is that of a creative wave beginning at 1 and ending at 13,
with the numbers 6, 7 and 8 representing the crest of the wave. The
crest could be interpreted as a strong influential energy, although the
underlying influence on the Trecena would still rest in the beginning.
This conduit of light energy crests on 6 Etznab (Flint), mirror or
reflection, exposing our inner selves; 7 Cauac (Storm), gathering energy
to clear and cleanse our spirit; and 8 Ahau (Sun), embodiment of light
energy encouraging our inner spirit to flower. This influx of light
energy is just what we need in order to usher in the new cycle of 25,000
years beginning December 21, 2012.

As we journey through each day of this Trecena:

The Mayan Calendar does not “end” in 2012. In
his new book, “The Mayan Prophecies: The Renewal of the World,
2012-2072,” Kenneth Johnson explores the prophecies preserved in the
secret knowledge books of the Yucatec Maya and their message for the
years ahead. Click Here


5) Thanks to 4-ahau.com for the September Tzolkin Calendar Graphic: 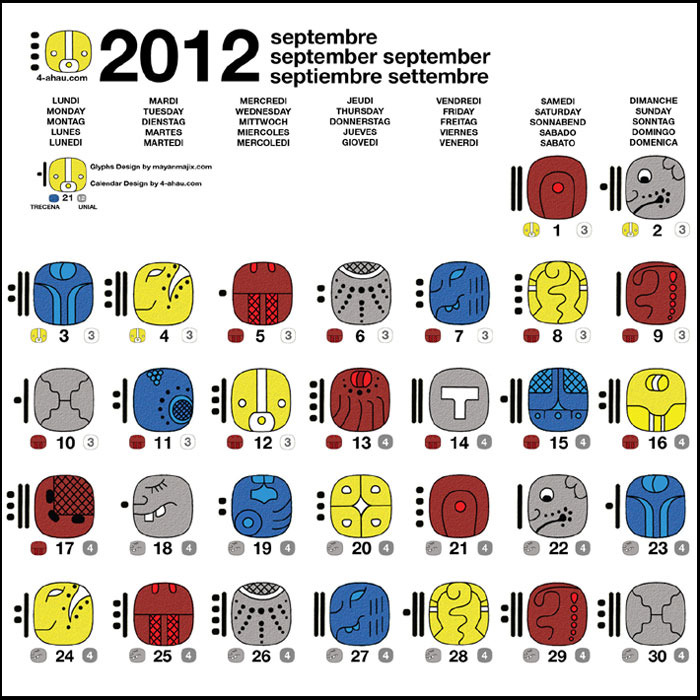