A Previously Unknown Role for the Cerebellum Discovered by Stanford Scientists

A Previously Unknown Role for the Cerebellum Discovered by Stanford Scientists Mon Apr 03, 2017 7:59 am 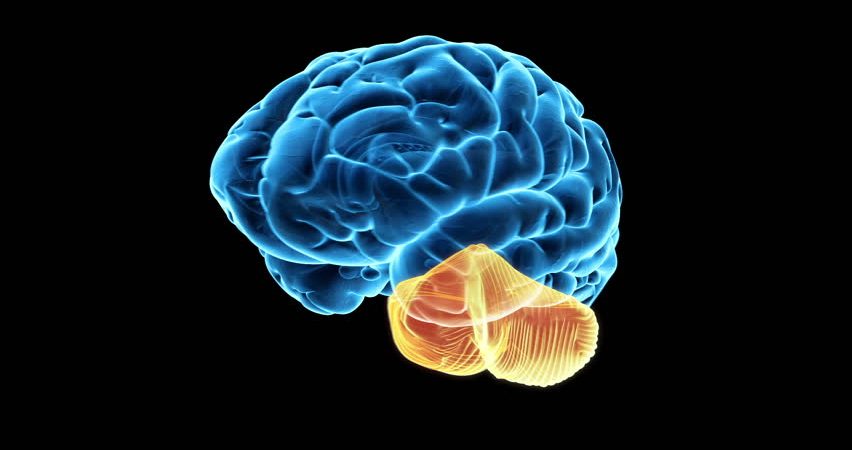 A Previously Unknown Role for the Cerebellum Discovered by Stanford


Researchers long believed that the cerebellum did little more than process our senses and control our muscles. New techniques to study the most densely packed neurons in our brains reveal that it may do much more. 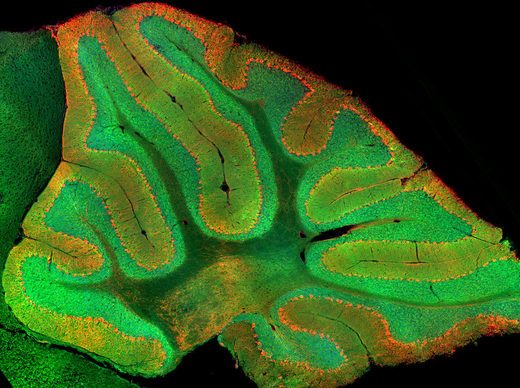 © Mark Wagner
Stanford researchers have found a previously unknown, cognitive role for the cerebellum’s granule cells, which show up as green in this image.
Pity the cerebellum, tucked in the back of the brain mostly just keeping our muscles running smoothly. Its larger neighbor, the cerebrum, gets all the attention. It’s the seat of intelligence, the home of thinking and planning. It’s what separates humans from our less quick-witted ancestors. The cerebellum – which literally means “little brain” – is thought to just sit there helping us balance and breathe, like some kind of wee heating and ventilation system.
But maybe not for long. In a series of experiments published March 20 in Nature, Stanford researchers show that neurons within the cerebellum respond to and learn to anticipate rewards, a first step toward a much more exciting future for the cerebrum’s largely overlooked little brother and one that could open up new avenues of research for neuroscientists interested in the roots of cognition.
The conventional thinking: not thinking
Scientists had assumed the cerebellum helped control muscles mostly because of what happened when it got injured. “If you have disruption of the cerebellum, the first thing you see is a motor coordination defect,” said the paper’s senior author, Liqun Luo, an investigator at the Howard Hughes Medical Institute, professor of biology and member of Stanford Bio-X and the Stanford Neurosciences Institute.
Admittedly, there had been some hints of a larger role for the cerebellum, but scientists had a hard time following up on those hints in part because the neurons that make up most of the cerebellum are difficult to study. Those neurons, known as granule cells, account for 80 percent of the neurons in the brain – all packed into the cerebellum – but only about 10 percent of its volume. At that density, conventional techniques for recording cell activity don’t work well, and without an effective way of studying granule cells in real time, scientists were left with an incomplete picture of what the cerebellum was really doing.
A new technology, and a helpful accident waiting to happen
Enter Mark Wagner, a postdoctoral fellow in Luo’s lab who led the research with Tony Kim, a graduate student in the lab of Mark Schnitzer, an investigator at the Howard Hughes Medical Institute and an associate professor of biology and of applied physics. Wagner had not set out to redeem the cerebellum. He simply wanted to study how the cerebellum controls muscles in mice using a new technique that would allow him to record granule cells in real time.
Wagner had earned his PhD working with Schnitzer, who develops pioneering methods for imaging neuronal activity in fruit flies, mice and other living animals. One method, called two-photon calcium imaging, had the resolution Wagner needed to study mouse granule cells in action.
In order to study motor control, the team had to get the mice to move. In this case, mice received sugar water about a second after pushing a little lever. While the mice pushed levers and received their rewards, Wagner recorded activity in each mouse’s granule cells, expecting to find that that activity in those cells would be related to planning and executing arm movements.
And to some extent he was right – some granule cells did fire when the animals moved. But other granule cells fired when the mice were waiting for their sugary rewards. And when Wagner sneakily took away their rewards, still other granule cells fired.
“It was actually a side observation, that, wow, they actually respond to reward,” Luo said.
Putting the brain back together
That discovery is something of a revelation. For 50 years, the assumption was that granule cells – and by extension the cerebellum – performed only the most basic functions. But because no one had the tools to look closely at granule cells in action, “we just didn’t know,” Wagner said.
Now that scientists have a better idea of what’s happening, Wagner’s hope is that it could lead to something much bigger. “Given what a large fraction of neurons reside in the cerebellum, there’s been relatively little progress made in integrating the cerebellum into the bigger picture of how the brain is solving tasks, and a large part of that disconnect has been this assumption that the cerebellum can only be involved in motor tasks,” Wagner said.
“I hope that this allows us to unify it with studies of more popular brain regions like the cerebral cortex, and we can put them together,” Wagner said, to figure out what’s really going on inside our heads.
Nathan Collins
Stanford News