Another Comet Discovered by ‘Lovejoy’ Now Visible in the Northern Hemisphere Mon Apr 03, 2017 8:04 am 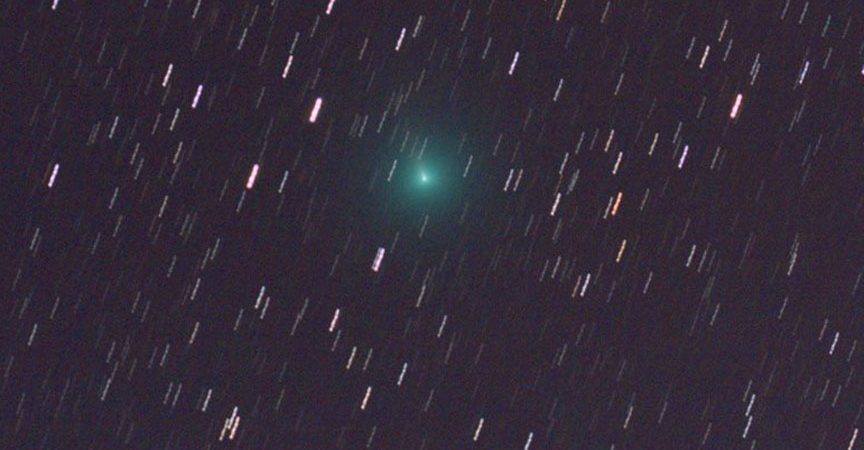 
Terry Lovejoy’s new comet has gone from faint to bright in just three weeks and is now a tempting binocular target at dawn.
Who doesn’t love a comet that exceeds expectations? That’s exactly what’s happening with Terry Lovejoy’s latest discovery, C/2017 E4 Lovejoy.
Discovered on March 10th at magnitude +12, early observations suggested a peak magnitude of +9 in mid-April, assuming it didn’t crumble apart en route to an April 23rd perihelion.
Forget that. This fuzzball’s already at magnitude +7 – 7.5 and a snap to see in 50-mm binoculars.
I know because I got up Wednesday morning (March 29th) shortly before the start of dawn, pointed my 10×50 glass just below the figure of Equuleus, the Little Horse, and saw a small, dense ball of glowing fuzz without even trying.
Comet 41P/Tuttle-Giacobini-Kresak — now circumpolar in Ursa Major — shines at a similar brightness, but it’s larger and less condensed and therefore not as easy to see as Lovejoy. 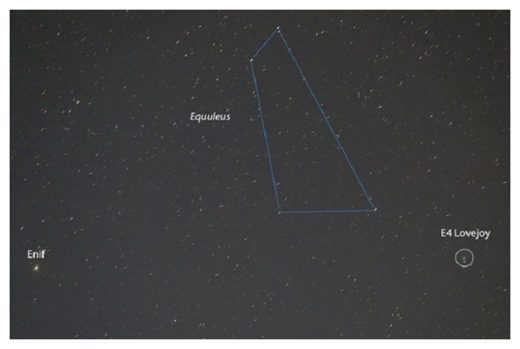 © Bob King
Comet Lovejoy captured with a 135-mm telephoto lens (f/2.8, ISO 2500, 10-second exposure) on Wednesday morning March 29th, when it entered the small constellation Equuleus. Though small at this focal length, the comet’s blue-green color is a dead giveaway.
A little more than a week ago, Comet Lovejoy glowed at magnitude +10 – 11; a few days ago it was at +9. Given its meteoric rise in brightness, observers are anticipating the comet to crest to magnitude +6 around perihelion as it describes a roller coaster arc across Pegasus and Andromeda. Twice it passes bright deep-sky objects: the bright globular cluster M15 on April 1st and the Andromeda Galaxy on April 20 – 22. Another easy time to spot it will be on April 8 – 9 alongside β Pegasi in the northwest corner of the Great Square. 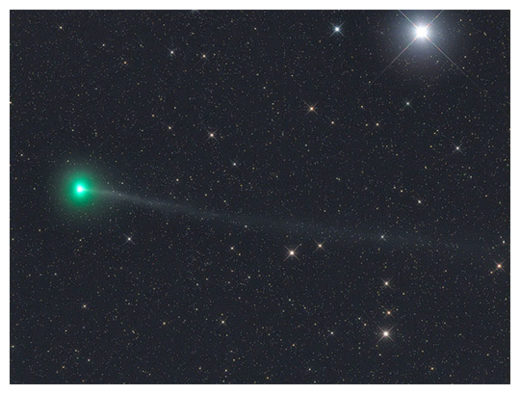 © Gerald Rhemann
A faint ion tail extends for more than 1° in this photo taken on March 30. Note the comet’s flattened coma shape. North is up and east left.
With the Moon out of the picture until around April 7th, comet watchers have lots of dark-sky time to pursue this new find. Just remember that you’ll only have a relatively short time before the start of dawn, when the comet is highest in the eastern sky. Because of increasingly early sunrises, Lovejoy maintains a fairly constant 15° elevation at the start of morning twilight from mid-northern latitudes through mid-April. My observation was made at 5 a.m. about 10 minutes before dawn’s first light. 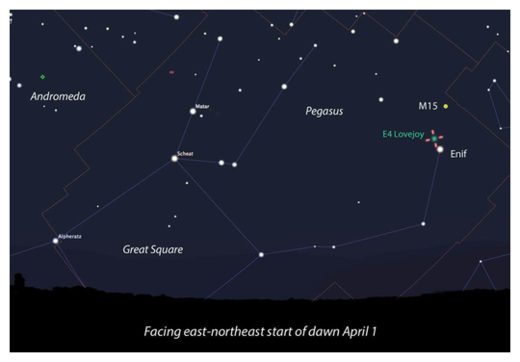 © Stellarium
Facing the east at dawn on April 1st from mid-northern latitudes, you’ll see Comet Lovejoy just north of Epsilon (ε) Pegasi (Enif).
Already it’s developing jet-like structures within the coma and a narrow gas tail. Through my 10-inch telescope on March 29.4 UT, the bright, compact coma measured 5′ across with a hint of blue from fluorescing gas. Recent images show the coma as oval or “flattened.” When you seek the comet, note the coma’s shape and color and the visibility of the newly-emerging, west-pointing tail. Amateur Chris Wyatt of Australia reports that a Swan Band filter enhances the comet’s visibility; give a look if you have one. 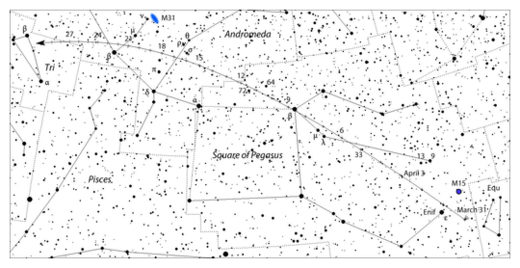 © Map: Bob King, Source: Chris Marriott’s SkyMap
This map shows C/2017 E4 Lovejoy daily at 5 a.m. CDT (dates marked every three days) now through late April. Stars are shown to magnitude +8 and north is up. Click for a large version you can save and print.
The Stellarium map shows the comet’s position on April 1st before dawn. I include it so you can see the “lay of the sky” at dawn to anticipate what to look for. The more detailed map shows the comet’s position every three days with the standard north up orientation.
Please feel free to share your observation at the Comments link. What you see will help others know what to anticipate. I’m grateful to New Zealand sky enthusiast Graham Wolf for his unflagging reporting on the comet, part of the reason I got up at 5 a.m. to see it! There’s ongoing discussion among comet observers that C/2017 E4 may be intrinsically faint and soon fade or disintegrate before perihelion — all the more reason to have a look while the looking’s good.
To stay abreast of new developments with Comet E4 Lovejoy, drop by the PACA Comets Lovejoy Group for current images and commentary.
Bob King
Sky & Telescope