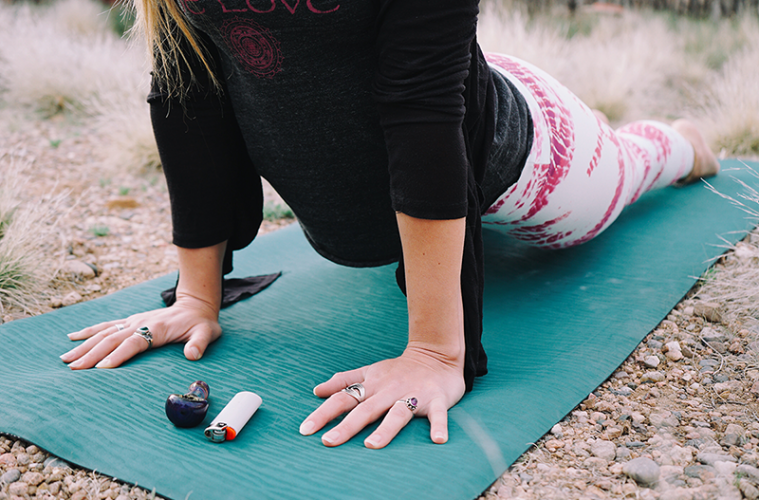 “Yoga and herb intake have been linked since ancient times. The yoga sutras, written in Sanskrit before the time of Christ, are considered the practice’s foundational text. The sutras list herbs as one of five methods to lift the veil of ignorance, or the barrier between the conscious and the unconscious.” [1]
advertisement - learn more

While many people feel that cannabis and exercise go anything but hand-in-hand, there is an emerging group of individuals coming forward claiming that, for them, the two actually pair quite well. In fact, they go as far as to claim that practicing yoga and receiving the therapeutic benefits they so desperately need would be all but impossible without the relaxation and pain relieving qualities cannabis has to offer.
Accounting for a large majority of said individuals are those with painful physical conditions who desperately
need the therapeutic benefits of yoga but who are unable to receive them without cannabis, due to its immense pain relieving and overall relaxing qualities. Others who are adamant about the fact that cannabis use enhances their yoga experience are those who are so tense, stressed, or anxious that they are unable to practice yoga in a manner that provides all, if virtually any, of the full range of benefits the practice has to offer due to their inability to fully surrender and melt into the process.
Such individuals feel the relaxing properties of cannabis help them clear their heads, relieve physical and mental tension, eliminate racing thoughts, and center them in a way that enables their minds, bodies, and spirits to benefit far more from the practice than they otherwise would. Since cannabis calms overactive brain activity and greatly reduces tension, it is not the least bit surprising that people are finding it to be the centering remedy needed to allow them to surrender to the practice; essentially opening the gateway to the renewal and rejuvenation yoga brings, which so many are starving for in the fast paced, high-stressed society we currently live in.

Arguments Against the Use of Cannabis During Yoga Practice

Of course, not everyone is on board with the growing trend of combining cannabis and yoga, most notably those who consider themselves to be disciplined yogis who view yoga itself as a strict, structured discipline to achieve mastery over the body and mind. To those who oppose the use of cannabis during yoga practice for this reason, “marijuana use in this context may suggest that a person is dependent on the drug for that mastery.” Furthermore, they feel that “attending a class in this drug-induced state may not allow for a clear, tranquil mind.” [2]

Arguments for the Use of Cannabis During Yoga Practice

The subtler attainments come with birth or are attained through herbs, mantra, austerities or concentration. Cannabis use allows for a quieting of the outside world, and the ability to focus more totally on the interior process of meditation.
advertisement - learn more

– Yogasutras 4.1 [3]
Although many people do not typically associate cannabis with exercise or any other productive activity, largely due to the “stoner” stereotype that casts people who use cannabis as unmotivated and lazy, the truth is that more stimulating strains of cannabis like sativa or sativa dominant ones can prove to be uplifting and motivating. Such strains may work to encourage productivity by providing users with smooth energy while simultaneously calming tension in the body and/or mind. These effects are especially beneficial for those with physical or mental conditions, such as chronic pain or severe anxiety, who would otherwise be rendered unable to participate in much needed therapeutic activities like yoga.

Final Conclusions on Cannabis and Yoga

In conclusion, while both sides hold validity in their own right, nothing in this world is black and white and there is rarely only one side to any given issue. So, what it comes down to, at least for those who are pro cannabis and 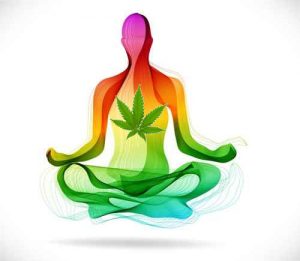 yoga, is this: While it’s nice that many are able to engage in an activity like yoga, whose benefits are so broad in range and nature — positively affecting the mind, body, and soul to an immense degree — not everyone can be so lucky. For those who are not so lucky as a result of a debilitating physical or mental condition, they are at least lucky enough to have found something that enables them to practice yoga and improve their lives, which in this case happens to be in the form of cannabis.

Related CE Article: The Top 6 Reasons Why You Should Consider Not Smoking Weed On A Regular Basis
CE has also written many articles on the medicinal benefits on this plant in treating various diseases, from cancer to epilepsy. Please sift through the website and use the search bar if you’re looking for me!
REFERENCES: