OUT OF MIND » TRUTH IN CONSPIRACY THEORIES? » ILLUMINATI AGENDA & WORLD DOMINATION » Rauðskinna: The Famous Icelandic Book of Black Magic that was Written by a Christian Bishop

Rauðskinna: The Famous Icelandic Book of Black Magic that was Written by a Christian Bishop Wed Apr 12, 2017 8:17 am

By  NATALIA KLIMCZAK | Ancient Origins
Rauðskinna is a legendary book that was more terrifying than most of the black magic documents ever produced.  It was so dark, that most people could not believe it was written by a Christian bishop. Its main objective was to use magic to gain control of Satan himself.
Also known as The Book of Power, Rauðskinna (‘Red Skin’ in Icelandic) took its name from the red cover written in gold-lettered runes. It was a collection of the darkest rules and spells known to have been created by a man who officially worshipped the Christian God. However, it seems that its author, Gottskalk Nikulausson, wanted much more in life than serving his religion. What did he want to achieve? And why did he explore the field of black magic, which was so contrary to his position as a bishop?

The Bishop and his Holy Book

Gottskalk Nikulausson was born in 1469 in Iceland, and between 1496 and his death on December 8, 1520, he was the Bishop of Holar.
He had been born into a good Christian family.  His uncle, Olaf Rognvaldsson, was a bishop and Gottskalk was his successor. However, as we will see, Gottskalk’s actions were far removed from the values he preached about in his official role.
Gottskalk had a mistress whose name was Gurdun, and two children: Odd Gottskalksson and Gurdun Gottskalksdottir. He also had a lover with a woman known as Jonsdottir, with whom he had a daughter named Kristin.
Historical records refer to him as manipulative, ambitious and cruel. He was more interested in his status in life, than carrying out his role as a bishop. Moreover, he started to explore the dark knowledge of ancient witchcraft in its blackest form, and this became his greatest obsession. 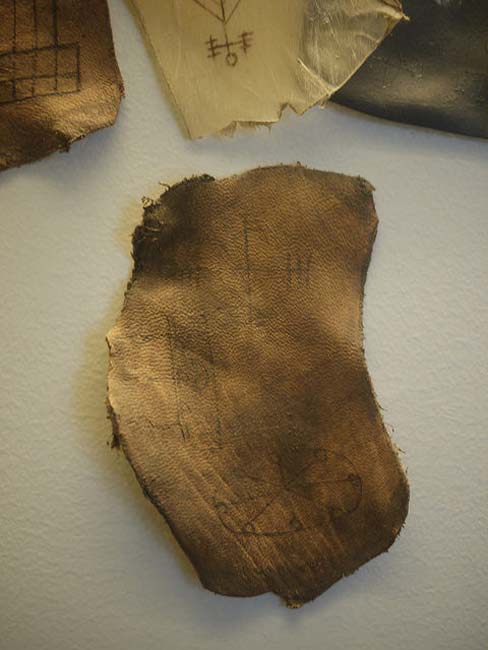 A piece of Icelandic sorcery by Ben Sisto (CC BY 2.0)

Like the authors of the Books of Shadow, dedicated to witchcraft, Gottskalk was passionate about magic and committed many years to the task of writing Rauðskinna. The main goal of the book was to create and master such a strong magic as to have control of Satan. He wanted to make Satan his slave and rule the world.
At the time of his death, Gottskalk was known as very dangerous and powerful person, who knew black magic better than any person who lived in Iceland at the time. When he died during the winter of 1520, Rauðskinna was buried with him, locking away its dark secrets forever.

The Follower of the Black Path

Gottskalk’s story is related to another one – about Loftur, a man who was seeking the same powers. Two centuries after the death of Gottskalk, Loftur arrived at the cathedral school in Holar, where Gottskalk had been a bishop, and studied magic. When he mastered the book known as Graskinna (‘Grey Skin’), also with black magic spells, he knew enough magic to create mischief among the town’s people. However, once he became bored of this, he began seeking the same dark knowledge that had attracted Gottskalk. One day he asked another student to help him raise all the bishops of Holar, who were buried in cathedral, from the dead. When the student refused, Loftur killed him.
According to legend, Loftur eventually fell victim to the magic and power he so desired. He was walking around the church and chanting spells to summon Gottskalk and get his book, the Rauðskinna. According to the folklore story retold by Shaun D. L. Brassfield-Thorpe:

”Despite all this, Gottskalk still did not come from his grave – so Loftur started chanting as never before. He turned the words of the Psalms into praises for the Devil and made a sorry confession of all his good deeds. The three crowned dead bishops kept as far away as possible from Loftur and faced him with their hands raised – the other dead bishops looked at them and kept their gaze away from Loftur. At last a heavy sound was heard, and a dead man arose bearing a staff in his left hand and a red book under his right arm. He did not wear a crucifix on his chest, and he looked unkindly at the other dead bishops. He gazed at Loftur, who chanted all the more during this. Gottskalk moved a little closer to Loftur and said scornfully: “You chant well, my son, and better than I would have expected. But you will not get my Rauðskinna.” Loftur then seemed to turn himself inside out and chanted in a way he had never done before. He changed The Blessing and The Lord’s Prayer into praises for the Devil, and the church shook like a straw in the wind. The student, watching in the belfry, thought he saw Gottskalk move again closer to Loftur and he seemed to thrust a corner of the book towards the magician. He had been frightened all this time but now he shook with his terror. He thought he saw the bishop lift the book and Loftur stretch out his hand. So, he pulled the bell rope as hard as he could and everything that had appeared vanished into the floor with a whispering sound.” According to legend, Loftur died soon later and was taken by the devil in the boat of the underworld. He had never become as powerful as Gottskalk.

So what happened to the grave of the cruel bishop and his infamous Book of Power buried with him? Some say that it was destroyed in secret, while others believe that it still remains in Iceland, continuing to hide his dark book of magic.
The story of the bishop, who became a master of black magic, has remained a well-known story in Iceland, passed down through the generations. But it is one which is rarely commented on by the Catholic Church.

OUT OF MIND » TRUTH IN CONSPIRACY THEORIES? » ILLUMINATI AGENDA & WORLD DOMINATION » Rauðskinna: The Famous Icelandic Book of Black Magic that was Written by a Christian Bishop