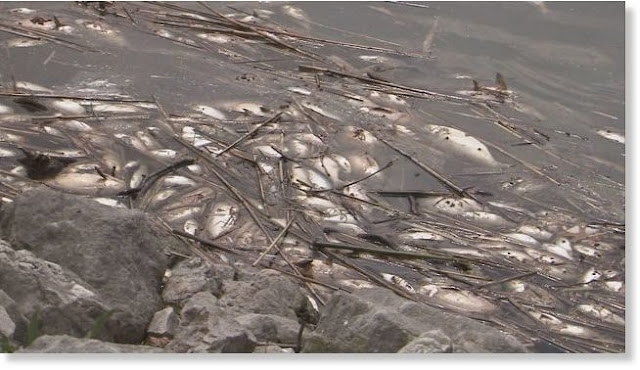 Photo sott.net
Residents in Chesterfield Township are concerned about hundreds of dead fish that have been washing up near their property.
The fish have been turning up in a canal behind Lighthouse Pointe, a residential street off Jefferson Avenue.
The canal flows into Anchor Bay in Lake Saint Clair. One homeowner tells us some of the fish are still alive and appear to be struggling in the water.
"Last weekend, we found it was very unusual.
My husband and I were walking along the dock here and the fish were actually coming out of the water gasping for air,"
Cindy Schrader said. "It was really unusual."
Neighbors say they've never seen anything in their backyards like this.
"I've lived here five years, and there's been dead fish in the water before but not by the hundreds," Magdaleno Dias says.
He says he saw about two or three hundred dead fish in the water just on Tuesday morning.
He'd like to see environmental officials come out and test the water.
So far, no word from Macomb County officials on what may be killing off the fish. 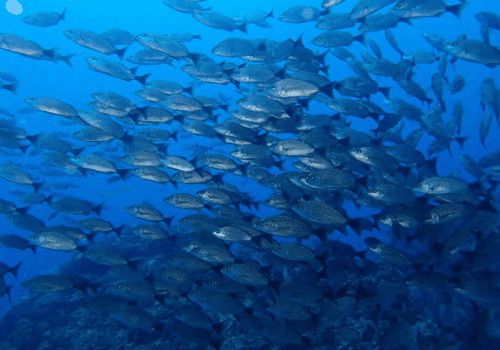 Photo vacationstocostarica.com
Residents of Costa Rica's northern Caribbean reported a massive number of fish deaths on the Pacuare and other nearby rivers between Sunday and Monday.
Mauricio alvarez, president of the Costa Rican Conservation Federation (FECON), told The Tico Times that his organization received reports that the dead creatures included various species of fish, including rainbow bass, sea bass, jurels and sardines, as well as crustaceans.
Many of the dead fish appeared floating on the Goshen river.
Most of these fish are part of the diet of various species of birds, therefore, environmentalists and local residents say they fear that the damage will expand to other animals.
Alvarez said he believes that incident could be linked to the use of agrochemicals at farms in the area. Matina and other northern Caribbean regions are home to extensive plantations of bananas, pineapples and rice, among others.
Coast Guard officers and staff of the National System of Conservation Areas collected water and fish samples from the river and sent them for laboratory analysis.
There is no official confirmation that the fish died because of pollution from nearby farms, but alvarez said this has happened several times in the past.
"Every single time it was for the same reason.
It's never been for any other reason than pollution from farms," alvarez said.
Contamination from chemicals comes from various sources, from substances applied to crops, to chemicals used to wash farms' equipment.
"It has also happened when they don't properly dispose of water used for washing the tanks in which they store the chemicals," he explained.
The environmentalist leader said fishermen in the area have told FECON that actions from these farms have caused the death of animals in the region's rivers many times since 2003.
However, not a single company or farm owner has ever been convicted.
There were six legal claims for fish deaths by poisoning in 2004, some of them linked to the Standard Fruit Company, "but the case ended in a settlement agreement," alvarez said.
The transnational company at the time pledged to pay $8,000 annually for five years.
The funds were to be used to repopulate the river.
A similar but larger incident occurred earlier this year in the Gulf of Nicoya, where thousands of dead sardines washed ashore near the coastal Pacific town of Manzanillo on Feb. 15. Preliminary reports from the Environment Ministry at the time attributed the deaths to a spike in the water temperature and lack of oxygen.
A few days later, however, experts from the National University stated that the collected evidence did not support that hypothesis.
Those scientists posited that the dead fish had been discarded by illegal fishing operations.