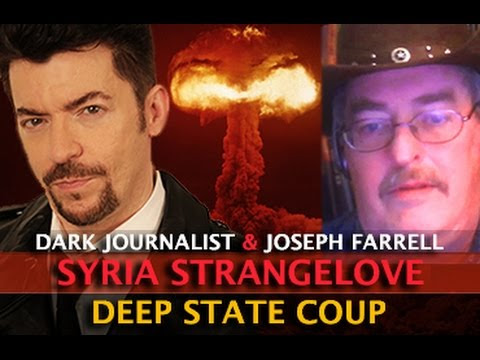 Published on Apr 13, 2017
Visit http://www.DarkJournalist.com
Deep State War Moves
In this fascinating episode on the ongoing battle between the presidency and the Deep State, Dark Journalist Daniel Liszt welcomes back Oxford Scholar and Geopolitical author Dr. Joseph Farrell. In light of the latest unexpected military actions against Syria by the Trump Administration, Farrell sees the high probability of a Deep State coup to replace Trump's original non-interventionist policies with a familiar Neocon doctrine of reckless interference in the Middle East.

Media Beating Syrian War Drums
President Trump found himself the subject of glowing praise by the same media that regularly skewers him as a 'Russian Agent.' Almost overnight Trump went from a zero to a hero with the Corporate Media and Bilderberg journalists like Fareed Zakaria saying 'Trump just became President' and liberal MSNBC anchor Brian Williams calling the airstrikes 'Beautiful.' This dramatic change in press rhetoric supports Farrell's contention that the Deep State is taking control of the Trump White House.

The Ascension of General Strangelove and Cold War 2.0
Just previous to the bombing of the Syrian airbase there was a serious staff shakeup inside the Trump White House with former Breitbart editor and influential Trump campaign strategist Steve Bannon being demoted and removed from the National Security Council. Previous to this the CIA had assisted the media in the downfall of General Flynn by leaking damaging information that was used to again promote the phony, 'Putin-Trump-Russia in Collusion' narrative as a way to further the Cold War 2.0 push they are committed to having.

These actions were meant to heighten the ascendancy of Neocon General 'Strangelove' McMaster who has suddenly become the face of military operations even superseding Defense Secretary 'Mad Dog' Mattis. Almost all of President Trump's Major Campaign Lieutenants are nowhere to be seen while his policies are reversed one after another.

Farrell sees the Deep State challenging the Presidency as they have since the JFK Assassination and attempting to change the course of history once again by using disputed incidents like the chemical attack on the Syrian village to create a false narrative to drive the US into another war.