OUT OF MIND » PERCEPTUAL AWARENESS » OTHER DIMENSIONAL » Similarities in Afterlife Myths ACROSS Civilizations?

Similarities in Afterlife Myths ACROSS Civilizations? 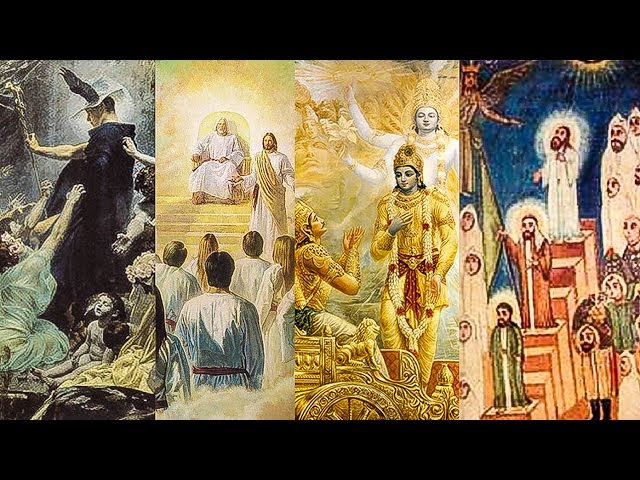 In almost every religion and every myth with creation at its heart, there exist one or more supreme beings, and whether they're immortal hammer gods or sexy water goddesses, they all have one thing in common - they are better than you. And with afterlife myths this goes even further, because not only did they build you and create all that you know, but they also get to decide on where you go when you die.

God was a pretty heavy topic to open with, so let's take a look at something simpler - fire. The idea of burning for all eternity in a world of fiery pits is commonly attributed to the Christian idea of Hell, but for some reason fire seems to play a role in many different after life myths, despite it being somewhat essential for cultured human beings to exist. We use fire to cook toast, to heat our homes, to light our reefers, but if you see flames after you've died, you're almost certainly in a really bad place.

Another bizarre similarity between many different myths and religions is the idea that the good afterlife is located somewhere high up in the sky, whereas the bad people are sent deep underground to somewhere dark and terrible. Obviously this may have something to do with the fact that underground caves are dark and occasionally terrible, and clouds are super-duper pretty, but is this enough to explain the sheer number of religions who have adopted this idea?

The Abrahamic religions of Christianity, Islam and Judaism believe that humans are judged based on their actions during life, after which they'll be sent to an afterlife which represents their moral purity. If you've kept your wiener clean, wore a hat on Thursdays or done whatever other crazy business your god asked of you, you'll go to the good kind of afterlife. And if not you'll go somewhere bad, forever.

In both Aztec and Norse religions, the dead move on to either a world of endless war or paradise, depending on the whims of their god or whether they died in battle. Vikings believed that half of those killed in combat would continue to fight alongside Odin after death, whereas the others get to sit in a field and get drunk with the goddess Freyja; but there's no indication that Norse mythology used morals to determine which afterlife you got. And what's even more bizarre is that anyone who died from boring stuff like sickness or old age would head off to Hel - that's Hel with one L - for an eternity of dreariness and drudgery.

OUT OF MIND » PERCEPTUAL AWARENESS » OTHER DIMENSIONAL » Similarities in Afterlife Myths ACROSS Civilizations?